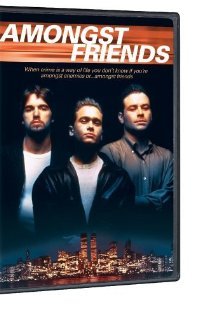 Raised on Long Island, three friends realize early in life that they want to be different from their contemporaries who live pampered lives in the film AMONGST FRIENDS, so they turn to lives of crime and they get more than they bargained for. This film suffers from excessive vulgar language, excessive violence and sex scenes that add nothing to the storyline.

Raised on Long Island, three friends realize early in life that they want to be different from their contemporaries who live pampered lives in the film AMONGST FRIENDS. Real work never occurs to the boys as they sell drugs to make a living. Soon, Trevor is caught and goes to prison; then Billy makes the break into big-time crime and carries Andy along as an errand boy. Finally, Trevor gets out of prison, and they plan to rob a nightclub, but it turns out to be mobster owned; however, Andy’s grandfather is a good friend of the mobster, and the friends are able to make restitution without going to prison. Eventually, the boys turn against one another (no honor among thieves here) resulting in the eventual murders of Trevor and Billy. In the process, Andy learns that crime does not pay and heads off for a new life in California.

This film works on several levels–it has memorable characters and a better than average storyline–it suffers from many shortcomings witnessed more and more in contemporary film. The vulgar language, in particular, is excessive: over 140 obscenities which ranks it along with some of the worst offenders in this category. Also, the excessive violence would offend many viewers, not to mention the sex scenes that add nothing to the storyline. Again, we have another example of a potentially good film ruined by the filmmaker’s poor judgment.