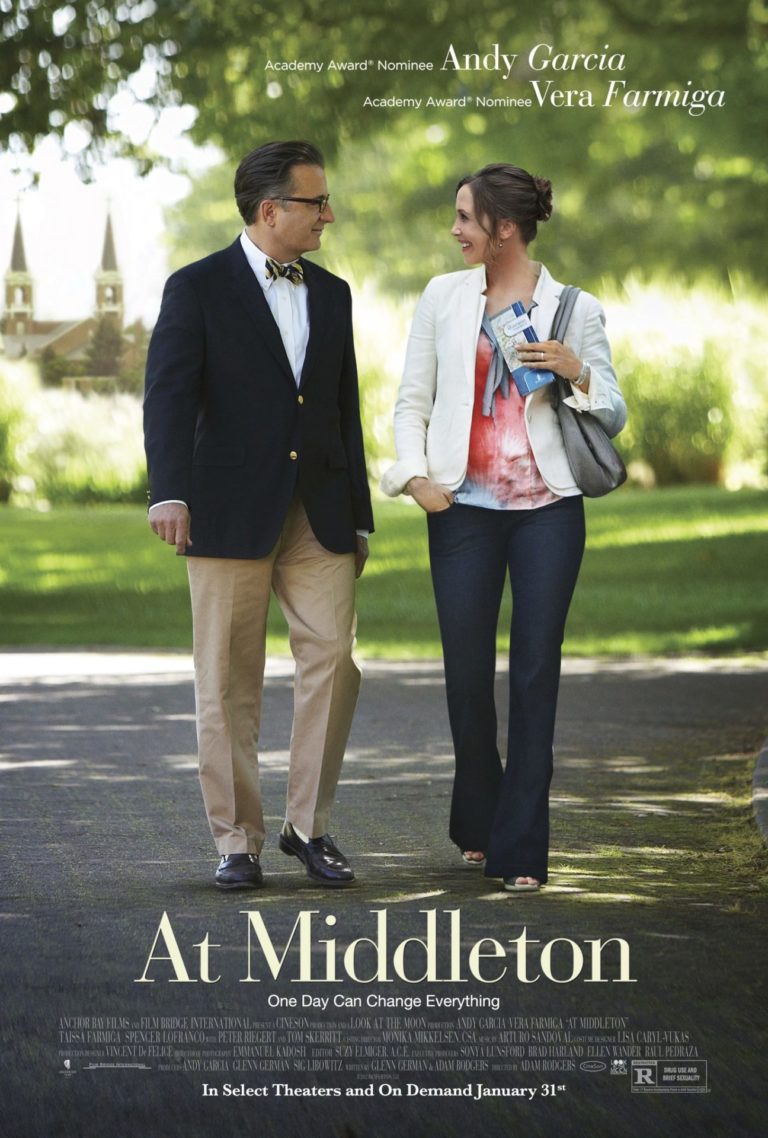 AT MIDDLETON stars Andy Garcia and Vera Farmiga as two older people married to others. George and Edith take their respective children, Conrad and Audrey, to a small college called Middleton for a tour day. Audrey is distant and intent on being ultra-studious. Conrad has typical teenage resentment and doesn’t want to be there. They’re both mildly rude to their parents, who start to notice each other. George makes some funny wisecracks about the tour guide. This intrigues Edith. Soon, they break free from the tour by stealing some student bicycles to ride swiftly away for some random fun.

AT MIDDLETON best exists as a showcase for its talented, appealing lead actors. Nothing too exciting happens, but their witty, charming rapport goes a long way. Also, they have the acting chops to pull off the serious moments. The story wrestles with issues of regret and missed opportunities in middle-aged people. There’s adulterous flirting, but the two married people eventually decide to stay true to their spouses. Despite that, AT MIDDLETON has some strong foul language, marijuana use, and a brief lewd moment.

(RoRo, B, LL, SS, A, DD, MM) Strong Romantic worldview with some light moral elements about an adulterous attraction that’s not carried further; 14 obscenities and profanities; no violence; man and woman married to other people carry on some adulterous flirtation during one day but don’t take their attraction further and the couple accidentally sees two college students fornicating on a rooftop from a distance but the college students are mostly clothed; beer drinking in one scene; male and female protagonists smoke marijuana with two college students and start laughing loudly together while high in a scene played for laughs; and, parents steal a couple of bicycles when the college student owners aren’t looking and ride around campus but leave the bikes on campus, and the protagonists sneak into a theater class taking place.

AT MIDDLETON is a low-key romantic comedy where two parents separately take their children to a tour day at a college called Middleton, only to find they are experiencing their own midlife crises and a mutual attraction. AT MIDDLETON has a strong Romantic worldview with light moral elements, some strong foul language, a crude sexual reference, and a scene of marijuana use played for laughs.

George Hartman (Andy Garcia) and Edith Martin (Vera Farmiga) are each middle-aged parents taking their respective children, Conrad (Spencer LoFranco) and Audrey (Taissa Farmiga), to a small college called Middleton for a tour day. While Audrey is distant from her mom and intent on being ultra-studious, Conrad has typical teenage resentment and doesn’t want to be there at all. They’re both mildly rude to their parents, who start to notice each other in the tour crowd.

After George makes some funny wisecracks about the tour guide and the tour, Edith is intrigued, and the two start hovering near each other more and more. They finally break free from the tour and take some students’ bikes to ride quickly across campus for some random fun.

Over the course of their afternoon, they sneak in and out of the school clock tower and into the theater building. In the latter, they end up taking parts in a comedic improv class. Eventually, they wind up in a student dorm room where they’re offered huge amounts of marijuana in a bong and get high with the students. Meanwhile, their children are starting to get to know each other a bit too. It becomes obvious that the children know their parents are both unhappy under the surface.

These conflicting realizations and relationship paths form the core of AT MIDDLETON. However, the movie best exists as a showcase for its talented, appealing lead actors, Andy Garcia and Vera Farmiga, as the two parents. Nothing too exciting happens anywhere in the story, but their witty, charming rapport goes a long way. Also, they have the acting chops to pull off the serious moments that arrive toward the end.

AT MIDDLETON wrestles with issues of regret and missed opportunities that afflict many people in middle age. There’s lots of adulterous flirting, but, in the end, the two married people decide to stay true to their spouses. They just hug and kiss on the cheek before they each go back forever to their respective lives. The man does learn to be less uptight, and the mom overcomes some of her sadness about her own broken marriage and her feelings of being devalued and taken for granted. Meanwhile, their two college-age children begin to approach their parents with increased respect.

All told, AT MIDDLETON is one of the more gentle R-rated movies released. In its description, the MPAA says it rated the movie R because of the marijuana scene and a scene where the older couple accidently sees two students fornicating on a roof from a distance, not because of the adulterous flirting. AT MIDDLETON also contains some strong foul language.