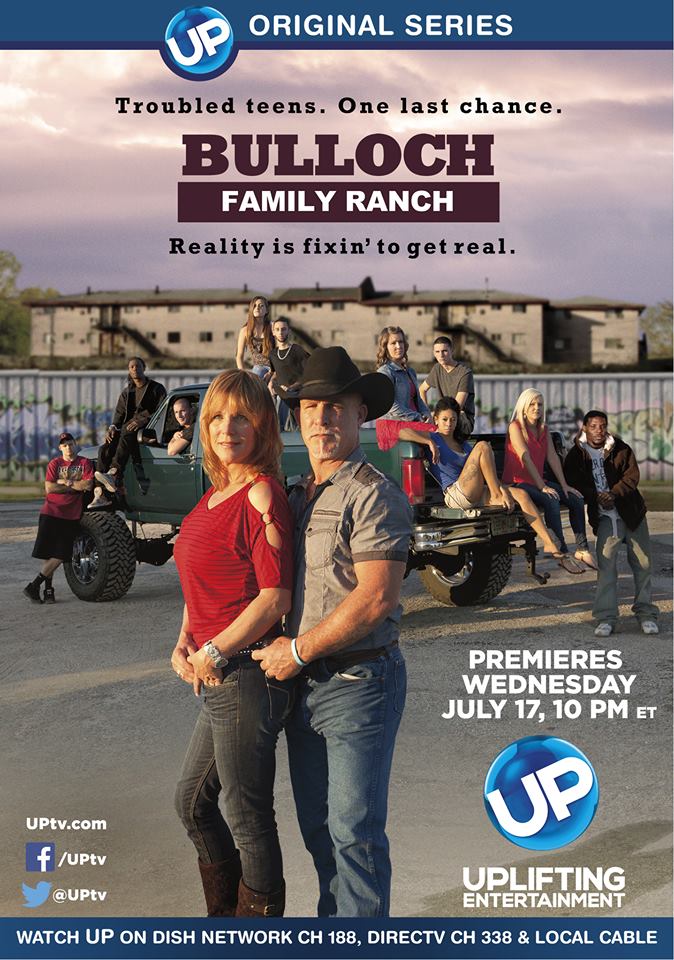 BULLOCH FAMILY RANCH is a refreshing and uplifting reality show. It features a remarkable Christian family that prays together, supports one another, works hard, and plays harder. The fun-loving group accomplishes whatever they set their minds to – like building a barn – even if it means luring their friends and local high school football players with family matriarch Julie Bulloch’s barbeque. Rusty and Julie Bulloch open their country home to help out troubled teenagers. They turn Lakeland, Florida street kids into “ranch kids.” In the first two episodes, viewers can see the Bullochs gathering people to build a barn and helping an African-American high school student, who needs to become more focused to graduate. “Everyone deserves a second chance,” Julie says.

Christianity is definitely displayed, but not sermonized, in BULLOCH FAMILY RANCH. The Bullochs genuinely live out Godly ideals, including sacrificing for one’s family and taking care of others in the community. They mix high doses of fun with their disciplined work ethic. BULLOCH FAMILY RANCH is a high-quality, all-ages program. It shows that Reality TV can be an inspiring, gratifying experience.

(CCC, BBB, CapCap, V, N, M) Very strong Christian, moral worldview about a compassionate couple, their children, and the troubled teenagers the couple assists, with prayer briefly shown and a Christian cross appears on a ranch logo in the opening sequence, plus strong capitalist elements; no foul language; some light violence includes riding bicycles into a lake from a pier and comically chasing someone with a two-by-four; no sexual content; upper male nudity of football players, woman wears shoulder-bearing blouses, slight female cleavage; no alcohol; no drugs; and, light reference to bad neighborhood and a scary mask is briefly shown.

BULLOCH FAMILY RANCH is a Reality TV show on the UP TV Network, formerly GMC TV, the Gospel Music Channel. It’s about a Christian couple and their family who open their home to teenagers in need.

No wonder Rusty and Julie Bulloch became the subjects of a new reality series. They’re admirable, hard-working, fun-loving, sincere, and compassionate Christians who open their home to others. In the first two episodes of BULLOCH FAMILY RANCH, viewers get to experience the Lakeland, Fla. couple’s tough, yet tender, heart, and their welcoming spirit with family and friends. Rusty and Julie have opened their country home over time to more than 25 street kids-turned-ranch youth who leave broken home lives to live sheltered by the Bulloch’s warmth and discipline.

The first two episodes also focus on Davin, an African-American teenager. Davin has bounced around 11 high schools. With Julie Bulloch by his side, he finds out he has a ways to go in order to graduate. Breaking the news back home, the pragmatic Rusty says Davin’s life will be nothing but “school, football and school.”

“One day, you’re going to stop playing football, but you’ve got to be smart the rest of your life,” Rusty add.

The admonishment doesn’t last long, and soon Davin’s nailing boards on a rooftop. Helping build a horse shelter is something new to Davin. His old friend, CJ, says he can see that Bulloch-living has been the best thing that’s ever happened in Davin’s life. Trying to build the small barn in just three days, the Bullochs get on the phone to rope in friends and high school football players with the promise of Julie’s barbeque. It becomes abundantly clear that the Bullochs don’t mess around when taking care of business.

This admirable quality is seen in both Rusty, a self-employed horse farrier and high school football coach, and his wife, Julie, who used to run her own catering business. Now, a slightly muscular, tank-topped 40-something, Julie has her own inflatables/pony-rides rental and photography business. She and her grown daughter, Amanda, strive to schedule events so they can simultaneously work and spend quality time together.

Family is a tremendous priority in the Bullochs’ lives. When Amanda works her other job at an independent coffee shop (where she met her husband, by the way), she sometimes sets her daughter in a highchair next to the cash register.

The Bulloch’s grown son, Brodie, also puts his grandparents high on his list, performing physical labor for them after a destructive fire.

Continuing with the family-driven theme, Rusty enjoys his own father’s playful camaraderie as Rusty and the gang work hard in the Florida heat to hammer away at the barn. When Rusty forgets something and runs to the store, the mice begin to play, led by none other than Rusty’s pastor-friend, Walter. The troupe sneaks a cool dip in the nearby pond, but is granted grace when some much-needed building materials arrive right on time.

BULLOCH FAMILY RANCH is about the whole Bulloch family, but in Rusty and Julie’s eyes, their family also includes the teenagers they humbly assist.

“I don’t think there’s such a thing as a bad kid,” Julie says. “They suffer from bad surroundings. Some kids just need direction, you know? I believe in starting fresh.”

Julie wants to see Davin walk across the stage and graduate, despite his challenging scholastic record. Julie believes in leaving the past in the past, saying, “I think everyone deserves a second chance.”

BULLOCH FAMILY RANCH emphasizes Christian values like prioritizing marriage and family, and exerting compassion toward troubled teenagers and animals. All of this is done without preaching, but just through wholesome, fun living. It’s about as refreshing as a slice of watermelon on a hot, Florida day.