CHARLIE AND THE CHOCOLATE FACTORY

"Virtue Is Its Own Reward" 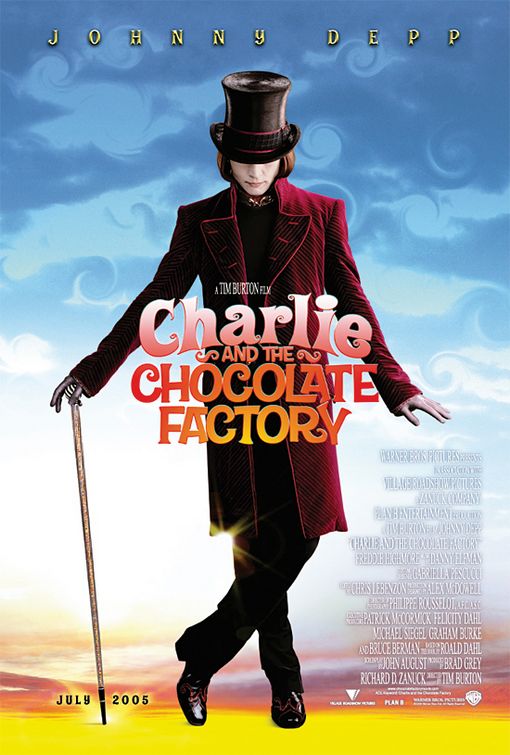 CHARLIE AND THE CHOCOLATE FACTORY is a wondrously quirky and heartwarming adaptation of the popular classic children’s book. Based on Roald Dahl’s book, the story tells what happens when poor Charlie Bucket wins one of five golden tours of Willy Wonka’s fabulous, mysterious candy factory. At the end of the tours, Mr. Wonka will give one of the winning children a special surprise, the best surprise of all. Unlike Charlie, the four other winning children are mean and/or greedy. One by one, they get into terrible trouble in Willy Wonka’s factory, and Charlie’s wildest dreams are within his grasp.

CHARLIE AND THE CHOCOLATE FACTORY is a deliciously delectable delight that will please many children of all ages. Director Tim Burton lavishly films Willy Wonka’s magical factory with all the imagination it deserves. The performances are highly enjoyable, including Johnny Depp’s as Willy Wonka. Best of all, the movie has a very strong pro-family message. Willy Wonka and Charlie learn that having a loving family is the best reward of all. CHARLIE AND THE CHOCOLATE FACTORY won’t stop people from fondly remembering the 1971 Gene Wilder version, but it will attract its own large following.

(BBB, CapCapCap, C, V, M) Very strong moral worldview with very strong pro-capitalist message that is pro-family, favors good parenting, rebukes bad habits in children, and warns against letting children watch too much television and playing violent video games; some redemptive elements; no foul language, but song twice says Willy Wonka is the “best darn guy who ever lived,” gosh darn is said a couple times, and double entendre joke is made about squirrels and the nuts they are trained to inspect; comical, slapstick violence includes a couple pratfalls, little girl karate chops three men and knocks them down (played for laughs), boy who can't swim falls into river of chocolate and struggles, pipe sucks boy from chocolate stream, squirrels throw two people down garbage chute, glass elevator crashes through glass ceiling and roof, character blows up like a blueberry, angry boy plays violent video game and yells, “Die! Die!” while shooting creatures, watching too much TV and playing violent video games has made boy too aggressive and he smashes a large candy egg with his feet in one scene, man in jungle kills giant flying wasp-like bug when it chases him, and mechanical dolls catch fire; no sex, but Willy Wonka mentions that chocolate releases endorphins that make people feel as if they’re in love and woman gives him a romantic facial expression; no nudity; no alcohol; no smoking; and, bad habits rebuked, some talk about luck, one rich father spoils his daughter, father won’t let young Willy Wonka have any candy and Willy runs away from home to become a chocolatier, but reconciliation eventually occurs.

CHARLIE AND THE CHOCOLATE FACTORY is a wondrously quirky and, ultimately, heartwarming adaptation of the popular classic children’s book. It has a very strong pro-family message with many moral messages. It’s also a lot of fun.

In the story, based on Roald Dahl’s book, Charlie Buckets lives with his parents and grandparents in a poor, dilapidated shack on the edge of town. The shack is so small that his grandparents have to sleep in the same bed. His Grandpa Joe used to work at Willy Wonka’s large candy factory nearby, but Willy Wonka fired all of his workers when some of them stole some of his recipes and sold them to his three rivals. No one knows how Willy Wonka makes his candy now.

One day, Willy Wonka inserts five golden tickets into his Wonka chocolate bars. The tickets allow five special children, and one of their parents as chaperone, to take a tour of Willy Wonka’s factory. At the end of the day, one of the children will receive a special surprise, the best surprise of all.

Charlie and his family waits anxiously while the tickets are found. Charlie’s parents are so poor, however, that they can only afford one candy bar for their son. The bar has no golden ticket, and neither does the candy bar that Grandpa Joe buys for Charlie with his Grandpa’s meager savings. Charlie just happens to find some money on the street one day, and the candy bar he purchases for himself has the last of the five golden tickets.

Unlike Charlie, the four other winning children are mean and/or greedy. One by one, they get into trouble in Willy Wonka’s factory, and Willy Wonka’s big surprise falls within Charlie’s grasp.

CHARLIE AND THE CHOCOLATE FACTORY won’t stop people from fondly remembering the Gene Wilder version from 1971. For one thing, its songs are not as catchy and memorable as the Oompa Loompa song in the original movie or the famous Candyman song. The new movie has plenty of charms of its own, however, not the least of which is Johnny Depp’s performance as Willy Wonka the candy maker. Freddie Highmore also does an excellent job as young Charlie, as does David Kelly as Charlie’s Uncle Joe. Tim Burton, the director, lavishly films Willy Wonka’s magical factory with all the imagination it deserves. Best of all, Charlie’s family seems more heartwarming in the new film. The love they display toward Charlie and toward one another adds to the movie’s strong pro-family message.

CHARLIE AND THE CHOCOLATE FACTORY has many other positive moral lessons to impart.

For example, the character of Willy Wonka presents a strong capitalist role model, despite his quirky behavior. Willy Wonka cares deeply about the products he makes, and about serving the consumers who buy them, even though he could care less about their private lives. Wonka learns through the course of the movie that, if you don’t feel happy about the products you make, then you probably won’t make very good products. The story also teaches capitalism based on meritocracy. Only the very best and nicest child will receive Willy Wonka’s special surprise at the end of the tour.

Eventually, Charlie teaches Willy Wonka that having a loving family is more important than being rich and successful. The movie also rebukes bad habits like constantly chewing gum, extols good parenting skills and warns parents about letting their children watch too much television and play violent video games.

CHARLIE AND THE CHOCOLATE FACTORY is a deliciously delectable delight that will please many children of all ages.

Watch CHARLIE AND THE CHOCOLATE FACTORY: