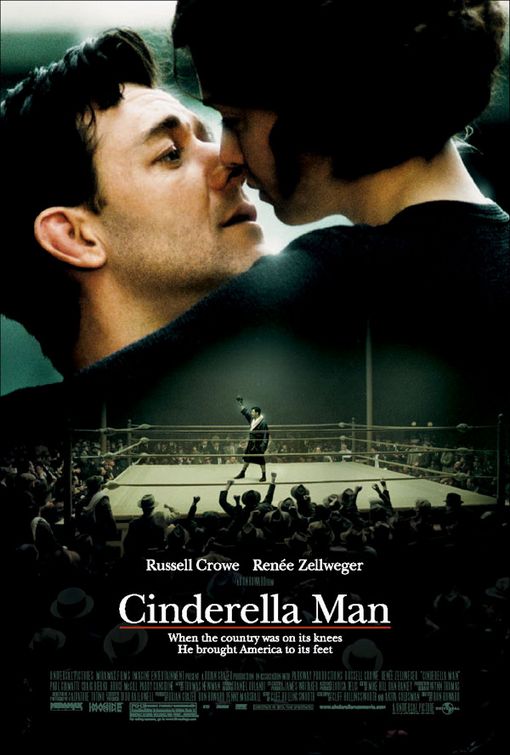 CINDERELLA MAN, based on a true story, is about the family and boxing career of James Braddock, who made one of the greatest comebacks ever in 1934 and 1935. After brief success in the late 1920s, some hand injuries stop Braddock’s career, and the Great Depression leaves his family destitute. Things look extremely bleak for Jim, his loving wife Mae and their three young children. Then, in the spring of 1934, his friend and former manager, Joe Gould, brings Jim a chance to fight a heavyweight contender (whose scheduled opponent can’t fight). To everyone’s surprise, Jim knocks him out in three rounds. After that, Jim defeats two other contenders, and wins the right to fight Heavyweight Champion Max Baer.

CINDERELLA MAN is one of the year’s most positive, most uplifting movies. Director Ron Howard and actor Russell Crowe do some of their best work, as do Renee Zellweger and Paul Giamatti. The inspiring story they tell has a very strong Christian worldview that extols family, faith, prayer, determination, and integrity. In addition to much boxing violence, there is plenty of foul language, mostly coming from the hero’s gregarious boxing manager, so media-wise caution is advised.

(CCC, BBB, Pa, LLL, VV, N, AA, D, M) Very strong Christian worldview, including overt positive references to prayers, especially at the climax of the movie, with a very strong moral portrayal of a family, a father, and a husband and wife who stick together through thick and thin, despite great adversity, as well as pagan elements where hero’s friend curses a lot and one character is shown to be a playboy; 38 obscenities (no “f” words), 27 strong profanities and three light profanities; many strong, intense boxing fight scenes including the usual fisticuffs, such as blows to the head, people knocked unconscious and some blood, plus scuffle with drunken man, night scenes where man walks through the about aftermath of a riot with viewers seeing people being treated and one corpse taken away, and film shown of man getting knocked out and dying in boxing ring viewed in a long shot; no sex scenes but kissing between husband and wife and one fighter appears to be a playboy who is surrounded by girls and has two girls in his apartment; upper male nudity in a sports setting and female cleavage shown briefly; alcohol use and minor character shows up drunk; smoking; and, minor character has a troubled marriage and Catholic hero struggling to provide for his family in the midst of the Great Depression tells wife that “I’m all prayed out” when she wants to pray together about their situation, but prayer is also shown as a positive thing that supports people and can get results.

Based on a true story, CINDERELLA MAN is about the family and boxing career of James Braddock, an Irishman from New Jersey who gained notoriety as a light heavyweight in the late 1920s, until he lost a fight in 1929.

The movie opens near the eve of that fight in 1929. It then skips ahead to Sept. 25, 1933. Jim’s boxing career is in decline, a decline that has been increased by injuries to one of his hands. His friend and manager, Joe Gould, tries to get him other fights, but the Boxing Commission doesn’t like Jim’s last two lackluster performances, so it pulls his license.

Like many other people, Braddock lost all his money in the Great Depression. Now, he and his wife, Mae, are struggling to put food on the table for their three young children. Jim tries to get work at the docks, but jobs are scarce and his injured hand doesn’t help. Then, one of his sons becomes sick in the dead of winter, with the electricity and heat shut off, and Mae has to ship the children to their relatives. Jim finally puts aside his pride and joins the welfare rolls. Eventually, he starts getting steady work as a dockworker, despite his injured hand, which slowly recovers.

Then, in the spring of 1934, Jim’s ex-manager, Joe, approaches Jim with a boxing match. Jim can get some easy money for his family by fighting a heavyweight contender named Corn Griffin at Madison Square Garden. When Griffin’s opponent suddenly can’t make it, Joe and Jim are offered 250 bucks for the fight. To everyone’s surprise, Jim knocks out Griffin in three rounds. After that, Jim successively defeats two other contenders, and wins the right to fight Heavyweight Champion Max Baer on June 13, 1935. Baer is a powerful slugger who’s already killed two men in the ring. Only the prayers of Jim’s wife, Mae, and his Irish Catholic fans can protect Jim from suffering the same fate.

CINDERELLA MAN is Ron Howard and Russell Crowe’s best work. The period detail in this movie is exquisitely rendered. The scenes of Jim and his family struggling amidst the Great Depression are heartbreaking and absolutely enthralling. The viewer suffers right along with this very appealing family.

Also, the boxing matches in CINDERELLA MAN are among the most exciting, most involving ever filmed. Director Ron Howard puts the viewer right in the midst of the action, taking every blow and delivering every punch. Be forewarned, however – the boxing scenes are more realistic than the ROCKY movies, so the fighting is violent and sometimes brutal, but not extremely bloody. Howard also heightens the jeopardy for his hero by having the characters talk about brain damage to Max Baer’s two victims and hinting that Jim’s vision may be affected by the possible damage his brain already may be suffering because of his career choice. The movie also seems to be fairly accurate, though the boxer Max Baer probably was not quite the villain that the movie makes him out to be.

The acting in CINDERELLA MAN is Oscar caliber all around. The actors make their characters come alive. Russell Crowe shows once again why he just may be one of the best actors of his generation. Renee Zellweger also delivers a superb performance, as does Paul Giamatti. You want these characters to win, not just survive.

Best of all, CINDERELLA MAN has a very strong Christian worldview. Faith and prayer play an important role throughout, but especially at the end when Jimmy’s life hangs in the balance. Also, the script as directed by Ron Howard contains a very strong, positive portrayal of a family that always sticks together in the midst of the Great Depression. Audiences will not find a more positive portrayal of a father and mother and a loving marriage this year. CINDERELLA MAN is filled with many inspiring scenes of this appealing family overcoming great adversity. It’s a truly eloquent portrayal of grace and grit under pressure.

Regrettably, along with the boxing violence, CINDERELLA MAN includes many obscenities and many strong profanities (but no “f” bombs). Nearly all, if not all, of the foul language comes from Braddock’s gregarious manager, not from the movie’s hero and heroine. Thus, CINDERELLA MAN deserves a media-wise caution, in spite of the movie’s powerful moral elements and positive Christian references.

Like its subject, Jim Braddock and his family, CINDERELLA MAN has a lot of heart. It is well worth seeing, and worth remembering during awards season.