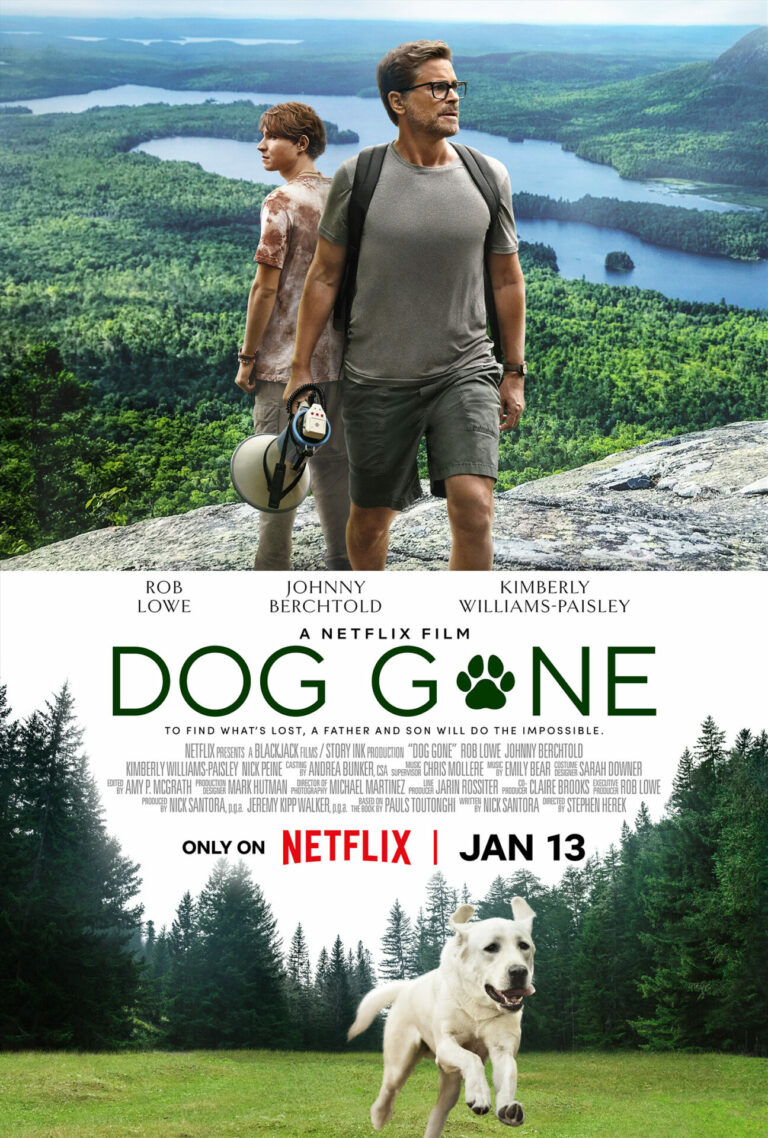 DOG GONE is a family drama on Netflix. A college graduate bonds with a dog, but when the dog goes missing, his whole family steps in to help. Fielding loves his dog, Gonker, but when he moves back home, his parents are concerned his primary focus is the dog, with no plan for getting a job. One day, Fielding hikes the Appalachian Trail, lets Gonker off his leash, and Gonker goes missing chasing a fox. His parents create a plan and strategy to find Gonker, and, because of this, the family bonds together.

DOG GONE is a wonderful, heartwarming, well-made movie. The story keeps the jeopardy and action moving. DOG GONE has a strong Christian, moral, pro-family worldview. It promotes loving one another, getting along despite differences, seeing each other’s point of view, having faith in God’s providence, and taking care of animals. Eventually, the father and son repair their fractured relationship. DOG GONE has a light Roman Catholic perspective. For example, a passing character prays to Saint Anthony in finding the dog and gives the family an icon of the Saint.

(CC, BB, FR, L, V, A):
Dominant Worldview and Other Worldview Content/Elements:
Strong Christian, redemptive, moral, pro-family worldview from an overt Christian, Roman Catholic perspective about loving each other, getting along despite differences, seeing each other’s point of view, and taking care of animals, but a passing character prays to St. Anthony for help in finding a dog and hands over an icon of the saint, and characters (including a dog) do some yoga exercises
Foul Language:
Five obscenities, three profanities (such as OMG), and dog urinates in car on hero’s friend’s lap
Violence:
Character in pain and coughs up blood, plus a character has bloody feet
Sex:
No sexual content
Nudity:
No nudity
Alcohol Use:
Some alcohol use such as new college grads drink some beer one morning
Smoking and/or Drug Use and Abuse:
No smoking or drugs; and,
Miscellaneous Immorality:
Nothing else objectionable.

DOG GONE is a family drama on Netflix about a college student who bonds with a dog, but when the dog goes missing, his whole family steps in to help. DOG GONE is a wonderful, enjoyable, heartwarming movie with very positive elements about supporting, encouraging and loving your family.

As the movie opens, Fielding is a college senior who has not yet figured out what he wants to do after graduation. After seeing his ex-girlfriend, he realizes he’s lonely and immediately goes to s rescue shelter to adopt a dog. Fielding sees a wonderful puppy that he decides to take home.

When graduation comes, Fielding’s parents come to see him. However, he’s so distracted by his dog, who he calls Gonker, that he misses his graduation. Days later he returns home to his parents house to live there after college. Fielding’s father is concerned that Fielding doesn’t have a job, or a good plan on getting one.

Although Fielding’s parents, John and Ginny were not excited about him having a dog, soon they fall in love with Gonker. One day, Fielding takes Gonker to the Appalachian trail and tales off his leash. Gonker sees a fox and starts chasing him. Fielding yells and yells for Gonker, but he is nowhere to be found.

When he goes home to tell his parents, they say they will help him find Gonker. Soon, as a family, they have a plan and are taking action to go find Gonker.

DOG GONE is a well-made movie that is entertaining throughout. The movie keeps the jeopardy and is keeps moving. Overall, DOG GONE is an enjoyable movie.

DOG GONE is a very positive movie with strong moral elements. The movie has a Roman Catholic perspective. For example, one passing character prays to Saint Anthony to find the dog and brings the family an icon of the Saint. Though this is the case, the movie has some positive elements of supporting family, loving each other, wanting the best for others and more.