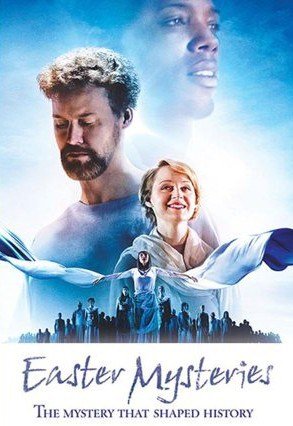 EASTER MYSTERIES is an oratorical musical about the story of Jesus Christ’s death and resurrection, told mainly through the eyes of Peter. It begins just before the night of Passover as the disciples prepare for supper with Jesus. Internal squabbles between the disciples and their relationships to the women in their lives make up a major part of the story. The story moves through the trial, crucifixion and resurrection of Jesus. Also, Peter anguishes over his denying of Jesus and wonders if he can be forgiven.

EASTER MYSTERIES is filmed onstage in front of a live audience. It is stylistically abstract and purposely promotes the diversity of humanity instead of focusing on historical accuracy. At the end, there is a panel discussion with religious leaders of different faiths from around the world. Islam and Judaism are placed equally alongside Christianity as the panel stresses the need for tolerance in the name of Jesus rather than an exploration of truth. Thus, although there is a Resurrection in the play, the open-ended nature of EASTER MYSTERIES warrants further discussion about the Bible and Christian doctrine.

(CC, BB, PC, FR, RH, V, A, M) Musical story about the death and resurrection of Jesus Christ, but a politically correct emphasis is placed on diversity of the human race and the coming together behind the concept of Jesus despite major differences in religious doctrine and culture where Islam and Judaism are given the same credibility as biblical Christianity, plus an emphasis on not offending others of different faiths and a promotion of tolerance over truth, with some dialogue and life situations given to characters that aren’t necessarily recorded in the Bible; no foul language; crucifixion and death are discussed, but no actual violence is depicted; no sex; no nudity; Passover wine use; no smoking or drugs; and, some immoral acts such as Peter’s denials about knowing Jesus and the betrayal of Judas.

EASTER MYSTERIES is an oratorical musical play before a live audience about the story of Jesus Christ’s death and resurrection, told primarily through the eyes of Peter.

It opens just prior to the Passover supper that the disciples have with Jesus. All 12 of them banter (or sing rather) back and forth about a strange feeling that this night is different than all others, but none can determine why. Jesus sits silently listening to their postulations, then goes into a soliloquy that tries to reassure them and also forecasts His death. Peter becomes upset when Jesus tells him that he’ll deny Jesus three times before morning.

At the supper, Jesus continues to talk to His disciples about remembering Him through bread and wine. He dismisses Judas and makes a point about carrying on His legacy by ministering to others. The disciples become concerned Jesus is leaving them, but Jesus tells them He’s sending the Holy Spirit, and they’ll never be alone.

On the way to the Garden of Gethsemane, Mary Magdalene catches up with Jesus and is all but hysterical at His strange behavior. She utters for the first time what will become her catchphrase, “You ask me to do something, and then you leave.” Jesus comforts her by saying He’s doing His Father’s work, and everything will work out for the good.

Things progress quickly as Judas betrays Jesus. Outside the court where Jesus is being tried, Naomi catches up with Peter, begging him to give up following Jesus and marry her as they’d intended to years before. Frustrated with Peter’s lack of response, she points out to the authorities on three separate occasions that Peter knew Jesus. Of course, Peter denies it, and the rooster crows.

The story moves through the trial, crucifixion and resurrection of Jesus. A good deal of time is spent after the resurrection as the disciples along with Mary Magdalene struggle to accept that Jesus is truly alive. Over the course of several scenes, Jesus reveals Himself to the various characters and makes amends with Peter. He leaves them with an optimistic message of hope for humanity, love for others and a promise that the Holy Spirit will be with them.

This musical is done in the form of a theatrical play, filmed before a live audience. It is very abstract in style with a sparse wooden stage and pale earth-tone costumes that are equally minimalistic. Dialogue and song each get about the same amount of time, but the music is unfortunately more on the drab side, feeling more like opera yet sounding more like a badly composed Broadway musical. Although it’s done purposely for the sake of a more diverse message, it is a little distracting seeing Jesus and the disciples portrayed as everything from African American to California surfer blonde. However, that is the more high-brow, abstract style that’s meant to be presented. In other words, accuracy is not a priority.

Although the story is Christian, Jesus is the central figure, and there is a Resurrection, only the more superficial doctrines of Jesus are displayed and discussed. Things like loving others, remembering His legacy, ministering to others, and feeling the comfort of the Holy Spirit are stressed, but the actual Gospel message of Christ’s divinity and salvation and forgiveness of sins through Jesus and his death and resurrection alone are not. This plays to the title, EASTER MYSTERIES, very well since the point of the musical remains a mystery.

After the musical finishes, there’s a panel discussion with religious leaders of various faiths and faith traditions, including Islam, Judaism, Catholicism, and Protestantism. Through that discussion, it becomes clear that the musical stays away from any substantive Christian doctrine in order not to offend people who might have different beliefs about Jesus and His message to the world. Jesus is talked about as an important figure for all religions that the world can unite behind, even if they disagree on the specific theology of who Jesus is. Consequently, further discussion of specific Christian doctrine will be required for EASTER MYSTERIES.