"A Slave’s Torturous Journey to Freedom" 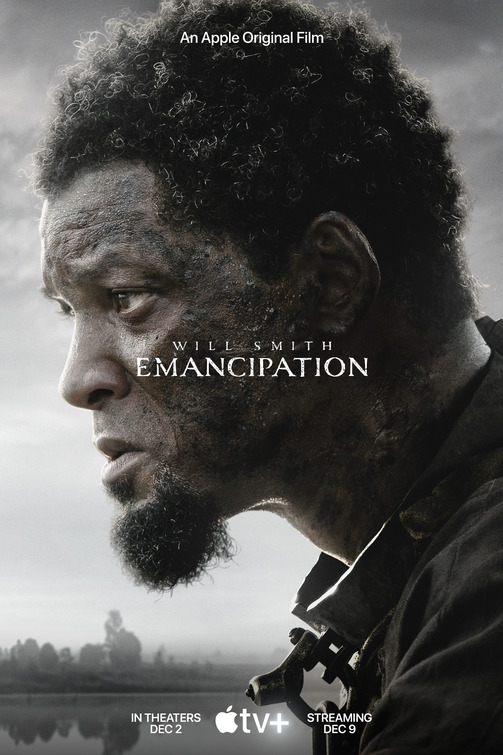 EMANCIPATION is a dramatic thriller about Peter, an enslaved man working on a plantation in the South. The movie is based on a true photo of a slave named Peter’s whipped back. Peter is ripped away from his family and sold to the Confederate Army as manual labor for building a railroad. Peter learns that slaves in the North have been freed. He makes an escape northward. However, a brutal overseer is enraged that Peter has defied him at every turn. He decides to do everything in his power to track Peter down and kill him.

EMANCIPATION keeps viewers on the edge of their seats. Will Smith does an excellent job as Peter. However, the movie doesn’t offer any powerful history lessons about slavery. It makes an enslaved man appear more like an action hero. The good news, though, is that the hero has a strong Christian worldview. He recites Bible verses with his family, is constantly praying and often thanks God for giving him strength and endurance. Sadly, however, EMANCIPATION has too much extreme, graphic, bloody violence. It’s hard to watch.

(CCC, BBB, H, LL, VVV, A, D, MM):
Dominant Worldview and Other Worldview Content/Elements:
Very strong Christian worldview with very strong moral, pro-family elements includes lead character promotes a Christian worldview, recites Bible verses with his family, mentions God as his strength and source of endurance, is constantly praying and thanking God for his ability to endure, but one slave questions lead character’s faith in God after witnessing and enduring brutal treatment, and one soulless slave owner has no belief in God and believes himself to be the highest power and often refers to himself as a god
Foul Language:
Eight obscenities (including one “f” word), three GD profanities and some uses of the “n” word
Violence:
Frequently extremely graphic violence such as bloodshed exploding from all body parts, bombs destroy lives, body parts blown off, dead heads hung on pikes, constant whipping, slave owns beat and kick and punch black slaves, dogs attack enslaved men, obscene images of men being tortured, a woman’s arm is cut off in a cotton machine, bloody war violence
Sex:
No sex scenes or sexual immorality, just light kissing between a husband and wife
Nudity:
Some upper male nudity
Alcohol Use:
Light drinking, slave owners drink beer
Smoking and/or Drug Use and Abuse:
Smoking but no drugs; Miscellaneous Immortality: Lots of racism and really brutal and cruel mistreatment of slaves is depicted (including body parts ripped off and bodies attacked by dogs), and a photo of the hero’s scarred back from suffering many whippings becomes a symbol of heroism in the North during the Civil War, but a Union general scoffs at the photo, saying that he only sees disobedience and doubts the hero has the fighting spirit to become a Union soldier, but the hero responds that the scars are a result of his constant fight against his slaveowners.

EMANCIPATION is a movie of many things, action, thriller, and drama. The movie follows Peter, an enslaved man living in the South. Peter is a loving father, a devoted husband and a man of deep faith. He constantly relies on his faith in God to get him through hard times and encourages those who are also enslaved to do the same. While others enslaved question how he can still believe in God, and brutal slave owners mock his faith, none is as cruel as Jim Fassel.

Shortly into the movie, Peter is taken from his family and sold to the Confederate Army as manual labor for building a railroad. Fassel notices Peter’s fearlessness, his willingness to look his slave owners in the eye, and his endurance during whippings for Peter always helping up slaves who have been beaten. His disdain for Peter explodes. He taunts Peter and orders him to call him a god. When Peter refuses to do so, Fassel chains Peter up and watches as his vindictive dog snarls and growls in Peter’s face, inches from taking it right off. Smith, as Peter, morphs into a believable portrayal of a tortured slave, making it an agonizing experience to watch somebody so abused. Shortly after this encounter, Peter gets word that Lincoln has freed the slaves in the North. So, he decides to get North as soon as possible.

Peter runs into the swampy lands, and other slaves around him follow suit. The Confederate Army begins to shoot and beat any slaved man they can catch. It’s one of the movie’s many horrific, brutal scenes, with horrific shots of body parts falling off, and blood spewing everywhere.

Meanwhile, Fassel, along with a couple others, jump on their horses and race after Peter and a few other slaves, whose endurance has led them far into the swamp lands. With the slave owners on horses, they almost catch up to Peter and the other slaves, when a swampy river comes into view. Peter and the others jump in it, escaping to the other side, except for one young boy, who’s too afraid to move any further. Fassel and his men show up and force their dogs to attack this young boy in a graphic, sickening image. The boy barely survives. Fassel says if he tells him where Peter is headed, he will let him live. The boy reveals Peter’s plan to Fassel. Peter is headed to the North. Fassel thanks the boy, then shoots and kills him.

Back in the swampy land, Peter and the other two slaves have each ran down separate paths. Peter is alone now as the camera follows his journey of survival. Peter injures his leg and only keeps going after he steals a sheet from a plantation home to tie it up. After a young girl, not more than 7-years-old, spots Peter hiding in the yard, she yells, “Runner!” Her cry catching the ears of Fassel. Peter jumps into the swampy water once again and hides, barley getting away from the scent of Fassel’s dogs. Fassel and his men walk away, and just as we think Peter is about to catch a break, an alligator appears. Peter battles the alligator with a stick and ends up killing it. Later, Fassel and his men find the dead alligator. They rip it open, stunned and impressed that Peter got away from it, and the chase continues.

Will Fassel catch Peter? Will Peter ever make it to the North to freedom?

EMANCIPATION will keep viewers on the edge of their seats, but it doesn’t offer any new revelations or powerful history lessons about slavery. Will Smith does an excellent job as Peter, but his actions at this year’s Oscar ceremony may have damaged his credibility playing such a heroic character in the eyes of many movie lovers. Also, though the production values in EMANCIPATION are high, and the movie is engaging, it doesn’t sit well to see a brutal time in American history, slavery, morph into something more like an action thriller and a torturous cat and mouse game. The history of slavery is not I ROBOT (one of Smith’s previous action thrillers), after all. This leads one to ask what kind of statement EMANCIPATION is trying to make about the atrocities of slavery? In their attempt to do something different, the filmmakers have made an enslaved man appear more like an action hero, thus, perhaps, watering down the historical components of this time in American history.

The really good thing about EMANCIPATION, though, is that it has a very strong Christian worldview. Peter recites Bible verses with his family and is constantly praying and thanking God for giving him the ability and strength to endure his trials and tribulations.

However, EMANCIPATION has far too much extreme, graphic, bloody violence, with body parts being ripped apart and gallons of blood being spilled. It’s hard to watch. Also, the violence is so extreme and graphic that some or many viewers may find Peter’s survival somewhat unbelievable, dramatically speaking. That’s the nature of miracles, however. In the end, Peter’s prayers are answered. Finally, EMANCIPATION has one “f” word and three GD profanities.

After a brief, limited theatrical run in a few select theaters, EMANCIPATION is now streaming on Apple TV+.