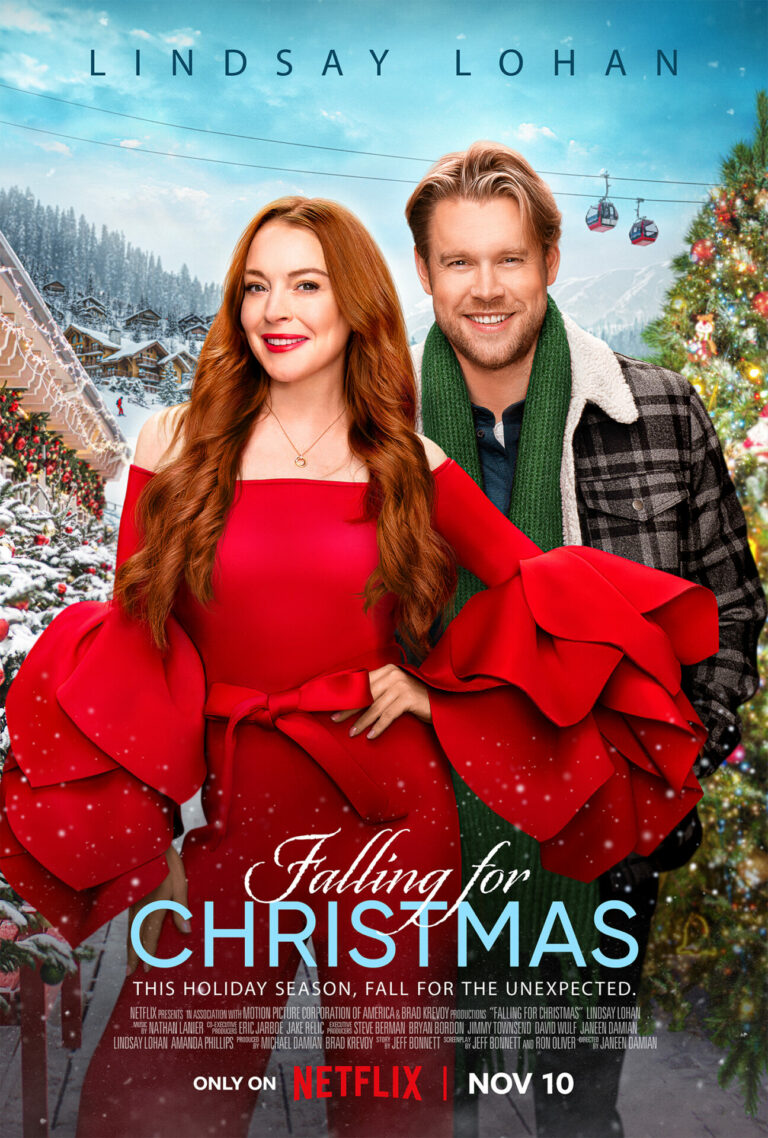 FALLING FOR CHRISTMAS is a romantic comedy on Netflix. Spoiled hotel heiress Sierra Belmont has just been offered a managing position at her father’s expensive ski resort in Aspen. Sierra has all the room service, couture clothing and personal assistants a girl could ever want. To top it all off, her influencer boyfriend, Tad, just became her influencer fiancé! Things change when Sierra and Tad get separated after a skiing accident, and Sierra wakes up with complete memory loss, not even knowing her name. Ironically, she ends up at the North Star Lodge, which is losing guests to her father’s ski lodge. Will someone come looking for Sierra? Can she survive outside her pampered lifestyle?

FALLING FOR CHRISTMAS is a light, fun Christmas movie for families. This is Lindsay Lohan’s debut after a decade away from movies. The Christmas settings are gorgeous, and the positive messages will leave most viewers with a smile on their faces. FALLING FOR CHRISTMAS has a strong moral worldview promoting love, family and compassion. Even when things aren’t looking good, characters are reminded to keep the faith.

(BB, L, A, M):
Dominant Worldview and Other Worldview Content/Elements:
FALLING FOR CHRISTMAS has a predominant Moral worldview that ultimately portrays an extensive list of moral and Biblical virtues and values- such as love, family, generosity, honesty, compassion, honoring one’s parents and more. Family is extremely important. While there are some rude characters, they are still treated with love and compassion by the kind characters, and in the end, they come around to show love and compassion themselves, plus a comment is made about a person being “a Savior”
Foul Language:
One or two “OMG” profanities said in shock, one “for God’s sake” profanity said in frustration, and there’s a scene with a broken toilet that squirts water all over someone's face
Violence:
Mostly comical violence, character flies backwards off a mountain on skis, and one falls off the mountain, they both tumble down hitting trees and bumping into things, girl is found unconscious after hitting tree headfirst, character is so frozen that a fishing bait gets stuck in his face without him feeling it, one character faints
Sex:
No sex scenes or sexual immorality, but there’s brief kissing at the very end
Nudity:
No nudity
Alcohol Use:
Some drinks such as a glass of champagne are seen, portrayed in a very classy manner, just sipping on one glass and nothing more
Smoking and/or Drug Use and Abuse:
No smoking or drugs; and,
Miscellaneous Immorality:
Bad role models with characters who believe they are better than everyone else just because of their money and status, and some characters hold money and fancy food, clothes and cars, etc., in the highest importance.

FALLING FOR CHRISTMAS is a Christmas romantic comedy on Netflix. The spoiled hotel heiress Sierra Belmont has a wealthy future lined up for herself with a new VP position at her father’s popular ski resort in Aspen. Sierra has all the room service, couture clothing and personal assistants a girl could ever want. What more could one ask?

Sierra’s influencer boyfriend has just taken her up to the top of a snowy mountain to propose. Was it more for his followers to see? Probably. Regardless, the two are engaged only moments before a gust of wind sends them both over the edge of the mountain. Tad and Sierra flip and fly down the mountainside on their skis and are separated before Sierra crashes and is later found unconscious.

Ironically, Jake Russell, owner of the North Star Lodge, which is losing guests to the father’s rich ski lodge, is the one who finds Sierra and gets her to the hospital. When she can’t remember who she is, and nobody calling for her, Jake offers to let Sierra stay at his lodge for the time being. Meanwhile, Tad, frozen in the wilderness, stumbles upon a little shelter in the middle of nowhere and finds someone to help get him back into town.

Sierra takes on the name Sarah as she still can’t remember her name. Jake and his family need help at the lodge and figure Sierra (going by Sarah) can help out while she stays there. What they don’t know is that she’s never cooked or cleaned a day in her life! Sierra has a rough time adjusting to this different lifestyle and struggles with feeling that she can’t do anything right. However, as time passes, she seems to learn.

Over time, Sierra begins to enjoy things she would have never done in her previous life. She grows to love Russell, his family, and even the little traditional lodge. At the same time, Tad is out of his influencer comfort zone while trekking through the snowy fields with a man named Ralph, and even he is learning to appreciate new things! Everything seems to be taking a turn for the better until Sierra’s father returns to the hotel and realizes his daughter is missing.

Tad and Ralph are found by the police and brought into the station where Sierra’s father, Beauregard, happens to be looking for his daughter. They try to arrest Ralph, but Tad has a kind moment and urges them to release Ralph. Beauregard and Tad rush off to the lodge to find Sierra, where she’s throwing a Christmas party with Jake to help keep his family lodge alive.

Will Sierra regain her memory? Will Tad and father discover where she’s been?

The production quality in FALLING FOR CHRISTMAS is lacking on the filmmaking side, but media-wise viewers will enjoy this romantic comedy. The plotline is similar to other Christmas movies running on Cable TV or streaming outlets. The twist this time is having Lindsay Lohan of THE PARENT TRAP remake on screen again. The Christmas settings are gorgeous, and the overall sweet vibe keeps the audience watching. Silly, warm and predictable creates the perfect combo for families and lovers of romantic comedies.

FALLING FOR CHRISTMAS has a strong moral worldview, with characters who embody love, compassion, honesty, and more. The plotline and the characters portray numerous virtues that line up with the Bible. Family is held in high importance. Even when things aren’t looking good, characters are reminded to keep the faith. Other characters have different worldly values and may not be the best examples. FALLING FOR CHRISTMAS only has a few minor questionable elements.