FAR FROM THE MADDING CROWD 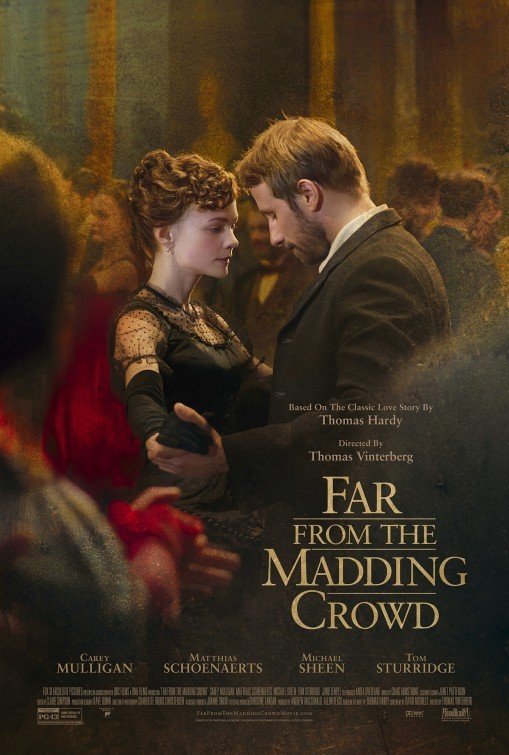 Based on Thomas Hardy’s novel, FAR FROM THE MADDING CROWD tells the story of Bathsheba Everdene, a young woman living in Victorian England who captures the attention of farmer Gabriel Oak. He asks her to marry him, but she turns him down. After inheriting her uncle's large farm, she hires Gabriel as the shepherd. William Boldwood owns an adjacent farm and asks for her hand in marriage, but she resists. Then, Bathsheba falls for the charms of army sergeant Frank Troy and they elope. Frank proves to be an irresponsible farm master and cruel husband. Eventually, Frank is killed, leaving Bathsheba to decide whether to accept Gabriel's unconditional love.

Rather than focus on high-society London, FAR FROM THE MADDING CROWD stays in the small country town of Weatherby. The movie is beautifully filmed. It’s refreshing to see people live with dignity and respect. However, the plot is a little contrived and could be developed better. That said, FAR FROM THE MADDING CROWD promotes Christian values such as respect, unconditional love, hard work, and morality. Some violence and sexual content warrant caution, however.

(CC, BB, Pa, CapCap, Fe, VV, SS, N, AA, M) Strong Christian, moral worldview taking place in a respectful society where people live primarily according to biblical principles, with several scenes of main characters attending church service, mitigated by a couple of characters ignoring moral propriety to get what they want, plus strong capitalist elements involving farm owners running their business, employing many people and selling their harvest to the market, but some feminist elements as heroine refuses to marry to maintain her independence as a woman; no foul language; light and strong violence includes a dog gets spooked and herds a flock of sheep over a cliff where they hit the rocks below, man shoots a dog, but the dog is off screen even though the sound of it falling to the ground is heard, brief scene where dead or dying sheep are lying on a beach after falling off of cliff, woman shoots quail for sport but we don't see her killing any birds, man lets air out of bloated sheep stomach by stabbing it with a hallow tube, two men are boxing bare-fisted at a carnival, man shoots another man in the chest and kills him, man handles wife roughly, a woman and her newborn dies off-screen, a woman and her newborn baby shown in open casket together, and attempted suicide by drowning but boat rescues victim; husband and wife depicted having relations in bed, man gropes woman while they kiss, it’s implied that an unmarried couple has had sex and a child was conceived; upper male nudity during boxing match and while in bed with wife; a group of men get drunk at a party and start singing drinking songs; no smoking; and, man gambles and ends up owing debts, man falsely flatters a woman in order to marry her and gain wealth, man lies to his wife about another woman, man disrespects his wife by forcing her to obey him even if he’s wrong, man tells wife she means nothing to him.

FAR FROM THE MADDING CROWD is about a young woman in Victorian England who inherits a large farm in the English countryside from her deceased uncle and must choose between three suitors asking for her hand in marriage. FAR FROM THE MADDING CROWD is a lovely depiction of Victorian England and a wonderful example of unconditional love, but it contains some strong violence and sexual content unsuitable for children, so extreme caution is advised.

Bathsheba Everdene, a young, independent and headstrong woman, travels to her aunt’s farm to help her for the winter. She captures the attention of Gabriel Oak, who owns a farm on adjacent land and soon asks her to marry him. Though it’s clear Bathsheba is attracted to him, she’s taken off-guard by his candor, as they barely know each other. Gabriel is disappointed when she turns him down, but remains respectful of her wishes.

One night, Gabriel’s dog is spooked and chases his entire flock of sheep out of their pin and over a cliff. As a result, Gabriel loses the farm and heads into town to find work.

Bathsheba receives a letter explaining that her recently deceased uncle has left his farm and fortune to her. It’s the best farm in that part of the country and is rich with grain, livestock and a very large house.

One night, a building on the farm catches fire as Gabriel is passing. He quickly pitches in to put out the fire, so Bathsheba gives him the job as the farm’s shepherd. William Boldwood, a wealthy businessman, owns the adjacent farm. He’s taken with Bathsheba’s independent ways. He offers to merge their farms and protect her interests if she agrees to marry him, but she resists, unwilling to give up her autonomy.

After being jilted at the altar, army sergeant Frank Troy wanders onto the farm and proceeds to woo Bathsheba. Though she’s reluctant to give in to his charms, he convinces her to elope. When they return from their abbreviated honeymoon, things quickly deteriorate as Frank begins irresponsibly tossing orders around as the farm’s new master. Bathsheba tolerates his behavior since she’s expected to be an obedient wife, but this goes completely against her nature.

[SPOILERS FOLLOW] Frank’s immorality catches up to him, causing him to attempt suicide by drowning when he finds out that his former fiancée and illegitimate child have died. However, a boat rescues him. Now, that Bathsheba thinks she’s free of her tyrannical husband, William pressures her again about marriage. Things get more complicated when Frank unexpectedly returns to the farm, but is killed by William when he’s seen rough-handling Bathsheba. With her husband now dead for good and her other suitor behind bars, she must decide whether to accept Gabriel’s unconditional love or lose it forever.

Filmed with much care, FAR FROM THE MADDING CROWD is based on the book by Thomas Hardy and has a fascinating quality to it that takes us into the world of Victorian England. Rather than focus on high-society London, it stays in the small country town of Weatherby, showing the agricultural, aristocratic way of life. As one would expect from this time period, social propriety is observed, and it’s refreshing to see people live with dignity and respect as compared to much of today’s society.

As is the custom of many movies adapted from books, the characters aren’t given as much time to develop. This leads to what seem to be abrupt decisions and actions that are out of place with a character’s pattern of behavior up to that point. The plot is also very contrived. Bathsheba is torn about how to handle her various suitors but it’s clear she and Gabriel are the right match for each other. So, what to do about it? The writer helps her out by conveniently getting rid of the other two men.

That said, FAR FROM THE MADDING CROWD has a lot of good things going for it. There is no offensive language whatsoever, and it promotes biblical values such as respect, unconditional love, hard work, and morality. There are also several scenes of the characters attending church, which shows there’s a Christian source to their values. Gabriel is a perfect example of patience and Christ-like love for other people. Ultimately, Gabriel’s unconditional love for Bathsheba overcomes her pride. Of course, every good movie needs a villain, and Frank serves this purpose. His immoral actions bring despair and heartache to others, but they don’t go unpunished.

FAR FROM THE MADDING CROWD does contain some sexual content unsuitable for children. The violence stems largely from the harsh realities of farm life, such as images of sheep falling to their death, or using a shotgun to kill both animals and people. Because of this content, MOVIEGUIDE® advises caution.

Watch FAR FROM THE MADDING CROWD: