"No Man Can Own a Child of God" 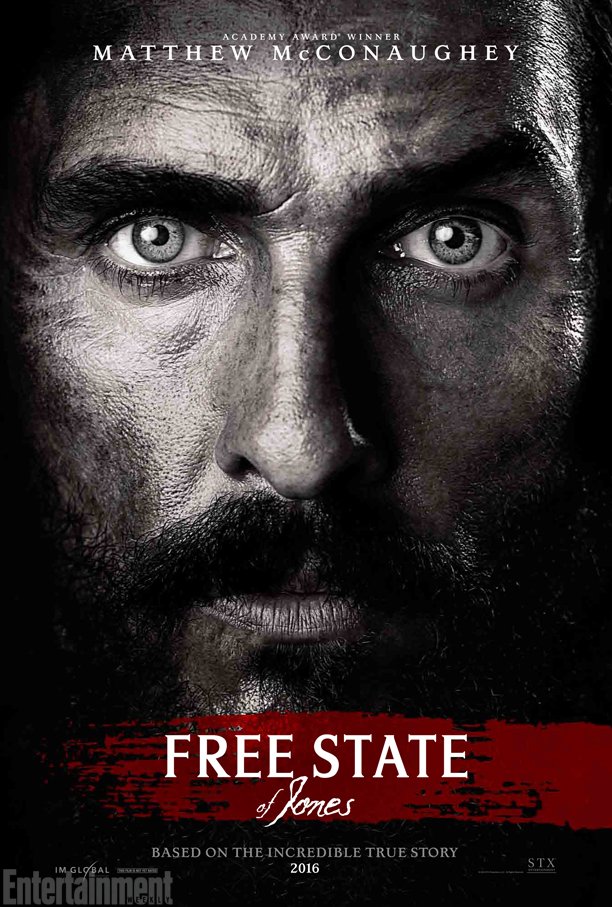 FREE STATE OF JONES is a war movie set during the American Civil War about a real life group of rebels within the Confederacy who decide to rebel. The movie stars Matthew McConaughey as Newton Knight. In 1862 Mississippi, Newton serves in the Confederate army, but not happily. Newton decides the Confederacy is being unjust and sees that the soldiers are stealing from the poor farms back home. So, he deserts and starts up his own mixed race army that eventually takes over three counties and declares themselves “the Free State of Jones.”

FREE STATE OF JONES is a fascinating story that Director and Writer Gary Ross delivers in a dramatic fashion. The movie is overlong, however, and unnecessarily meanders at the end. As usual, though, Matthew McConaughey is terrific. A strong Christian, biblical worldview keeps the movie’s moral positions on a scriptural basis. However, the characters are morally conflicted at times and make some questionable choices. That said, FREE STATE OF JONES has its positive and inspiring moments, but strong or extreme caution is advised due to some graphic war violence.

(CCC, BB, PP, L, VVV, S, AA, M) Very strong Christian worldview with strong biblical, moral elements using Scripture to defend freedom for all men and private property, man tells young boy “Jesus loves him,” and it’s stated that “no man can own a child of God”, a Christian funeral takes place, plus strong patriotic elements of fighting against tyranny and injustice, both in physical and in civic ways; seven light obscenities and two profanities; gruesome war violence includes many men and even women are shot, bloody wounds and men with missing limbs are displayed briefly in hospital tent during a war scene, man is bit by a dog, man is strangled, young boys are hung, and dog is stabbed; no explicit sexual content, but its implied woman was raped, and a man and woman live as if they’re married, though the man is married to another woman; no nudity; moderate drinking and some display of drunkenness; no drug use; racism, vengeance and theft.

FREE STATE OF JONES is a war movie set during the American Civil War about a real life group of rebels within the Confederacy who decide to rebel.

In 1862 Mississippi, Newton Knight (Matthew McConaughey) serves in the Confederate army, but not happily. The Confederacy has instituted an unprecedented draft requiring all white men in the South between the ages of 17-50 to serve in the army. To make the cause of their fight more confused, a law is issued stating that any slave owner that owned 20 slaves or more is exempt from fighting in the war. Newton Knight and his fellow comrades from poor Jones County no longer want to fight a war for rich slave owners, so Newton goes home.

Back at home, Newton discovers that the farms, many of which are being taken care of singlehandedly by women and children, are being ravished. A required 10% tax on all livestock and belongings is an additional law in the South, but many of the soldiers would abuse this, taking nearly everything from these families. Newton is infuriated by this injustice, and begins to arm the women and children to help fend off thieving soldiers.

Eventually, Newton is pursued as a deserter. He’s forced to retreat into the swamps to hide away with some runaway slaves. While Newton is gone, his wife Serena takes their child and leaves Mississippi.

As the war progresses, and Newton continues to hide away, the numbers of Confederate deserters begins to increase, and Newton decides to actively fight against the Confederate soldiers tormenting the women. Before long, battles take place, and Newton and his army will no longer be bullied. They eventually declare that the counties they have taken possession of are a Free State of Jones, which includes equal rights, a moral stand on private property and the idea that “no man can own a child of God.”

Throughout the conflict, Newton grows close with Rachel, a former slave who helped the deserters. As the years continue, many consider her to be his second wife, until years after the war when Serena comes back to him, after he’d already had a child with Rachel.

The war ends, but the movie continues on as it follows the struggle for former slaves to survive in a culture that despises them and to gain the rights that were promised to them by Federal law, including the right to vote (which the Democrats in the South eventually blocked).

FREE STATE OF JONES is a fascinating story that Director and Writer Gary Ross delivers in a slick, dramatic fashion. In a time when revisionist history is predominant and storytellers would rather insert their own prejudices or worldviews on history, Ross clearly tries to stay as close to the facts as possible, no matter how morally nuanced or politically incorrect it may be. That said, if Ross had spent more time polishing up an overlong script that tends to meander and needlessly jumps time to a fictional court case that takes place 85 years later, the movie might have been more effective. As always, however, Matthew McConaughey is terrific as always as the equally brutal and sensitive Newton.

While many characters start off their fight against the Confederacy for economic reasons, the movie argues that it becomes a moral one rooted in the Bible. Throughout the movie, Scripture is used to defend freedom for all men and to defend private property. At one point, Newton even tells a dying boy “Jesus loves him.” The movie provides this Christian, biblical worldview throughout its running time, but it’s not without some morally ambiguous moments as well. For example, Newton has his moments of vengeful rage, and his relationship with Rachel is questionable, due to him already being married. While interracial marriage was illegal at the time, many considered the two to be married throughout the rest of their lives. In fact, Newton left his 160 acres of land to Rachel and their son. The movie ends suggesting that Serena, his first wife, having nowhere else to go, was given shelter with Rachel and Newton.

FREE STATE OF JONES shows the moral nuances of this particular war better than most. Newton wasn’t perfect by any means. As portrayed in this movie, there were things he was willing to fight and die for, like freedom and the ability to “reap what you sow” in your own fields. While society has come a long way since those days, the lesson of compassion and fighting for the rights of others should never be forgotten.

Editors Note:  Director Gary Ross has helpfully listed his sources for many of the movie’s important scenes at http://freestateofjones.info.