"Unique Take on a Timeless Tale" 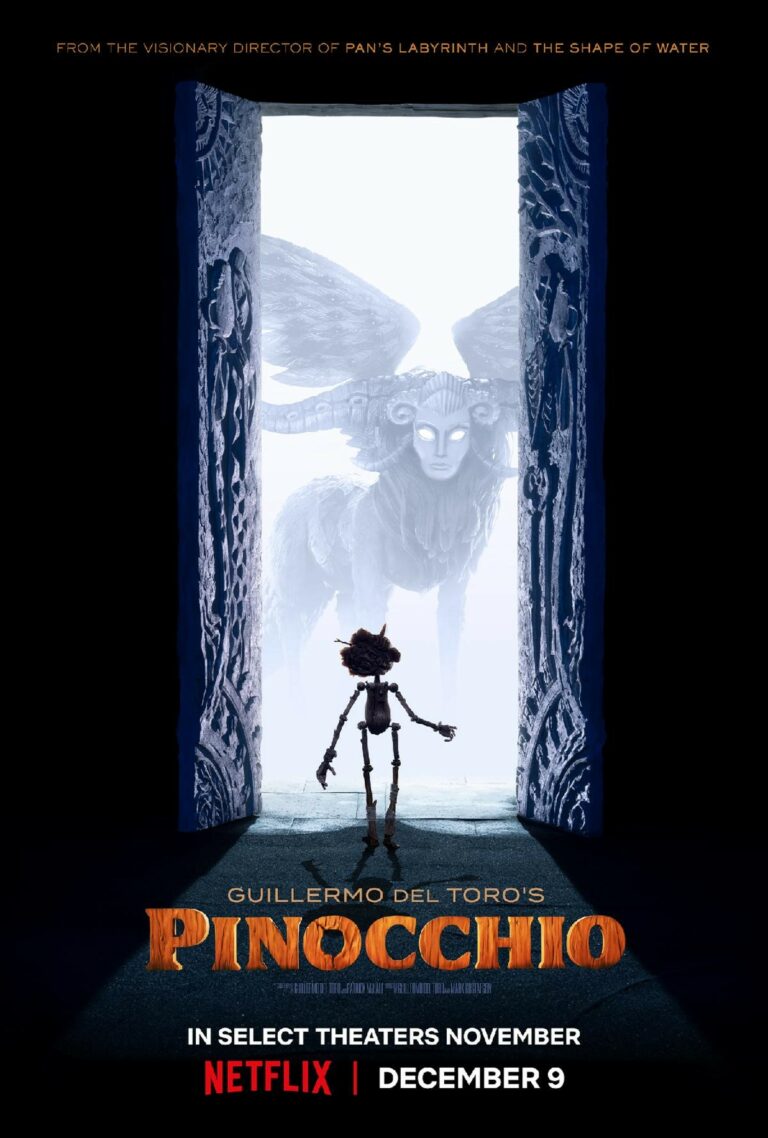 GUILLERMO DEL TORO’S PINOCCHIO, on Netflix, contains familiar characters, but offers a new take on the classic story. Set during Benito Mussolini’s reign in Italy, Geppetto constructs a wooden boy after the war kills his son, Carlo. Geppetto wakes up and discovers Pinocchio has come to life after a woodland sprite visits. In his grief, Geppetto believes Pinocchio will never replace Carlo. Naive to the outside world’s dangers, Pinocchio is captured by an evil circus manager trying to profit off him. Desiring to prove his worth to Geppetto, Pinocchio embarks on a journey with the circus across Italy.

GUILLERMO DEL TORO’S PINOCCHIO tackles themes of grief, family struggle and courage, and the staple of any good Pinocchio story, sacrifice for the ones we love. It has a strong Christian worldview with Christian imagery, including a church and crucifix built by Geppetto. The movie explores war, tragedy and fascism through the lens of a fairytale. DEL TORO’S PINOCCHIO is serious but contains lighthearted musical numbers. Some cartoon peril and violence, adult themes, and a scene of drunkenness warrant caution for older children.

(CC, BB, ACAC, L, VV, AA, M):
Dominant Worldview and Other Worldview Content/Elements:
Strong Christian worldview with Christian, redemptive themes (including images of church and a crucifix) and champions the moral virtues of obedience, love, overcoming grief, and sacrifice, and other themes central to the original story, plus has a strong message about courage against fascism
Foul Language:
Some light foul language like OMG, “crap” and some course humor about flatulence
Violence:
Movie deals with war and death throughout, a boy dies after a bombing, Pinocchio is able to die but come back to life, he is hit by car but does not die, a man abuses his circus animals, children are forced to practice war simulations but using paintball guns, a man falls to his death, a son stands up to his evil father, and his father is killed in the process, Geppetto, Cricket and Pinocchio are swallowed by a sea monster and must escape
Sex:
No sex
Nudity:
No nudity
Alcohol Use:
One scene of strong alcohol drunkenness; Geppetto builds Pinocchio in a drunken stupor, the scene is fairly graphic for a children’s movie
Smoking and/or Drug Use and Abuse:
No smoking or drugs; and,
Miscellaneous Immorality:
Pinocchio lies on occasion and his nose grows.

Streaming on Netflix, GUILLERMO DEL TORO’S PINOCCHIO is the most recent adaptation of the classic children’s fairytale, written by Italian author Carlo Collodi in the 1880s. While Del Toro’s adaptation contains many of the same characters and moral lessons, this stop-motion-animated adventure is a completely new take on the story of Pinocchio.

The movie opens with narration from Sebastian Cricket who explains how he met Geppetto and Pinocchio.

In a flashback, Cricket tells the story of Geppetto and his son Carlo. In many respects, Carlo is the perfect son to Geppetto. They enjoy songs together, and Geppetto shows Carlo how to plant the trees that he uses for his craftsmanship.

One day, while Geppetto and Carlo are working on a crucifix for their local church in a small town in Italy, planes fly over the small town. Cricket says the town wasn’t a target, but the planes drop bombs on the church, killing Carlo.

Geppetto’s grief over the loss of his son mirrors the new presence of Italy’s fascist military in the town. For years, Geppetto wallows in his grief, until Cricket appears as an adventurous author in a tree that Geppetto planted in honor of his son.

In a drunken stupor, Geppetto crafts a wooden puppet that resembles a boy. After he passes out, a blue spirit, which looks a little like biblical description of an angel, appears and makes the boy come to life to help Geppetto in his grief. However, when Geppetto discovers that his creation, Pinocchio, has come to life, he sees him as a burden.

It should be noted that when Pinocchio dies several times, the sister of the angel who is a chimera with a somewhat human face sends him back after a preordained period to the land of the living, because wooden puppets cannot die. Later in the movie, the angel has more of the look of a chimera with a human face.

Despite Pinocchio’s naivety about the outside world, he knows that he loves Geppetto and wants to prove his worthiness as a real boy. However, Pinocchio disobeys his father after being deceived by a traveling circus manager named Dottore. Dottore sees that Pinocchio could help revitalize his circus, and he tricks the wooden boy into signing a binding contract.

With Geppetto angry at him, Pinocchio decides to work for Dottore so long as Geppetto gets part of the profit. Dottore and Pinocchio quickly make a name for themselves and soon schedule their biggest performance yet, a show in front of Benito Mussolini himself. While Pinocchio discovers Dottore’s dishonesty, he must summon the courage to stand up to fascist Italy who also wants to use Pinocchio for war.

Throughout his adventures throughout war-time Italy, will Pinocchio learn what it means to obey his father and stand up for what is right, which are sometimes at odds with one another?

Guillermo Del Toro envisions a dark world with heavy themes balanced by touching musical numbers and endearing characters from the original story. The movie succeeds in its message of standing up to fascist leaders like Mussolini. With war as the backdrop, Pinocchio learns the true meaning of sacrifice when his father is in danger from a great sea monster, and Geppetto learns how to heal from past grief and tragedy.

Much like many fairytales, Del Toro doesn’t shy away from tragedy or death. The movie balances this with some child humor and heartfelt musical numbers. However, while there are many moral lessons that Pinocchio learns, the final lesson is the very Christian one that we only have one short life to live with the ones we love. At first glance PINOCCHIO has a hopeless ending, but it’s meant to open up the discussion of life and death, and how to live an honorable life.

GUILLERMO DEL TORO’S PINOCCHIO tackles themes of grief, family struggle, courage in the face of fascism, and the staple of any good Pinocchio story, sacrifice for the ones we love. There is a strong Christian worldview and some very strong Christian imagery like a church and crucifix built by Geppetto. Much like his movie PAN’S LABYRINTH, Del Toro explores war, tragedy and fascism through the lens of a fairytale. DEL TORO’S PINOCCHIO is dark but contains lighthearted musical numbers that are echoed in the movie’s score. Some cartoon peril and violence, adult themes, and a prolonged scene of drunkenness warrant caution for young teenagers and below.