"This Party’s Off Limits" 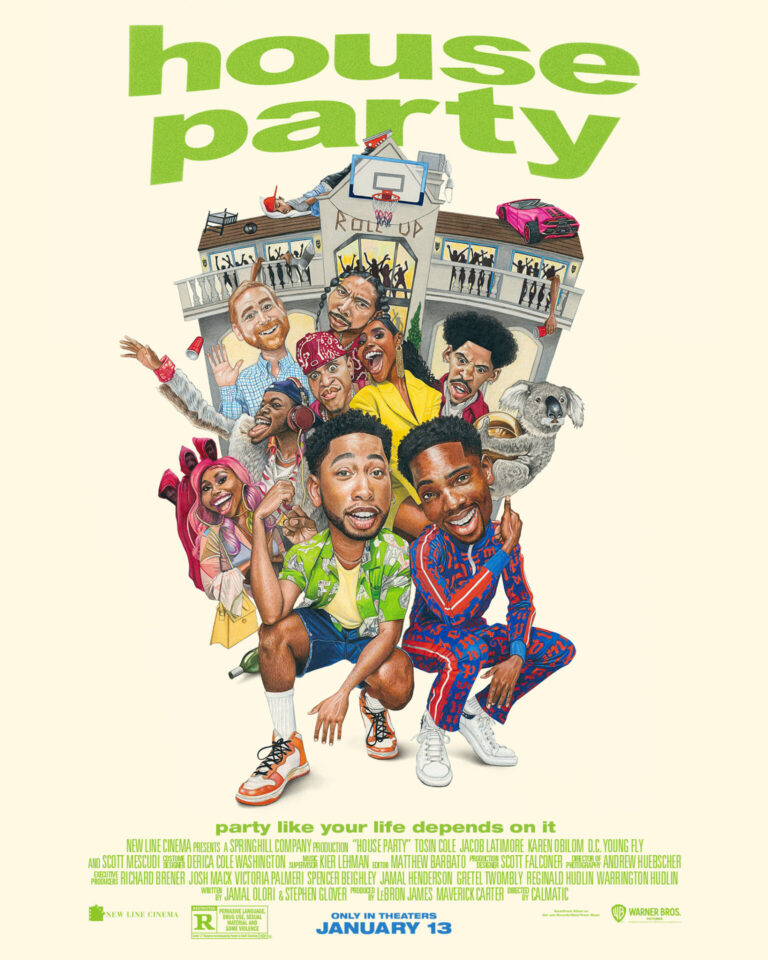 HOUSE PARTY is a comedy about two black men, Kevin and Damon, who decide to “borrow” a rich man’s house while he’s away to hold a money-making party. Kevin and Damon are best friends, but they need lots of quick cash. Though Damon always seems to be getting Kevin into trouble, Kevin accepts his friend’s suggestion to host the party at their last cleaning job, an exclusive mansion. The mansion happens to belong to none other than basketball star LeBron James, who’s gone to India to take part in a two-week meditation retreat. What could go wrong?

HOUSE PARTY has some chuckles, even some clean funny moments. However, there are too many expository scenes mixed with the comedy. So, the comedy, and the movie, never really soars. HOUSE PARTY ends on a positive note, with an act of sacrifice that solves the plot problem. There are also two scenes of forgiveness. However, the movie has more than 210 obscenities and profanities, lying, stealing, a scene with extreme comical violence, and some jokes about marijuana use. So, MOVIEGUIDE® rates HOUSE PARTY as unacceptable.

(PaPa, B, C, LLL, VVV, S, N, AA, DD, MM):
Dominant Worldview and Other Worldview Content/Elements:
Strong pagan worldview with some moral, redemptive elements where two men use a man’s house without his permission to hold a big money-making party, but they are punished for it, a man sacrifices his wellbeing to protect his friend, and there’s some forgiveness and reconciliation, plus some references to false religion where a famous basketball player goes on a two-week meditation retreat in India, but he returns in only a few days because he’s so talented that he became “enlightened” in less than a week, which is a joke about such New Age, Eastern activities so the joke ultimately sort of mocks the idea of Eastern meditation
Foul Language:
At least, 206 obscenities (including many “f” words), five GD profanities, seven OMG profanities, and a few “n” words
Violence:
An extreme slapstick violence scene when the two male leads are forced to engage in a gladiator contest to the death, but their friend comes to the rescue and chops off the head of one of their opponents, the friend is killed but he’s brought back to life, some physical contact during a one-on-one basketball game
Sex:
Some dirty dancing, and a few sexual comments, plus woman invites man over to her house, but he declines because he has to help his friend out of a jam
Nudity:
Upper male nudity, girl wearing only underwear is in a bed with a man when they are interrupted by the man’s friend, some female cleavage
Alcohol Use:
Alcohol use and drunkenness
Smoking and/or Drug Use and Abuse:
No tobacco smoking but there is some marijuana smoking and a koala bear gets high from the smoke in one scene and is shown passed out and groggy later; and,
Miscellaneous Immorality:
Strong miscellaneous immorality includes stealing, two men use a man’s house without his permission, but they get caught, lying, and a corrupt secret society is played for laughs.

HOUSE PARTY is a comedy about two young black men who decide to hold a party in basketball star Lebron James’ mansion while Lebron is in India for a two-week meditation retreat. A reboot of a popular 1990 comedy, HOUSE PARTY has some chuckles, with some light moral, redemptive elements, but the laughs are interspersed with too many expository scenes, and the movie has more than 210 obscenities and profanities, lying, stealing, and some jokes about marijuana use.

Kevin and Damon, are best buds, but they’re having some problems. They want to be promoters of clubs and musical concerts, but Damon owes a lot of money, and they’ve just lost a job to promote a party at a club they like. Things go from bad to worse when they’re fired from their jobs as house cleaners.

Though Damon always seems to be getting Kevin into trouble, Kevin accepts his friend’s suggestion to host the party of the year at their last cleaning job, an exclusive mansion. The mansion just happens to belong to none other than basketball star LeBron James, who’s gone to India to take part in a two-week meditation retreat. By using LeBron’s celebrity phone list and charging a high cover fee, they hope to make enough money to get Damon out of debt and help Kevin pay for his daughter’s private schooling and college fund.

What could possibly go wrong?

HOUSE PARTY has some chuckles, even some relatively clean funny moments. However, there are too many expository scenes mixed in with the comedy. So, the comedy, and the movie, never really soars.

HOUSE PARTY ends on a positive note, with an act of sacrifice that solves the plot problem. Also, at one point Kevin becomes upset at Damon for taking things too far, but the two men eventually reconcile.

Despite this positive content, the new HOUSE PARTY has a constant barrage of “f” words and other gratuitous foul language, including several strong profanities. Also, a scene of extreme slapstick violence occurs at a party of “The Illuminati.” In the scene, Kid Cudi takes Kevin and Damon to an Illuminati party to steal a replica of one of LeBron’s NBA championship rings, which was stolen during the party by three of Kevin and Damon’s rivals. Kid Cudi is a member, but Kevin and Damon are not. After stealing the replica, Kevin and Damon are exposed. They’re forced to engage in a gladiator fight to the death, but Kid Cudi gruesomely comes to their rescue by chopping off the head of one of the men fighting them. Finally, HOUSE PARTY also has some marijuana use. Characters are shown smoking marijuana, and a pet koala bear is shown getting high off the smoke.

HOUSE PARTY is excessive and, therefore, MOVIEGUIDE® rates it as unacceptable.