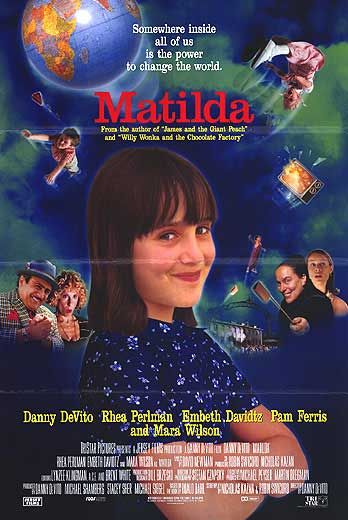 The next adaptation of a Roald Dahl book is MATILDA. It tells the story of an extraordinary but neglected girl with stupid parents who send her to a school with a wicked headmistress. Funny with a good message to love your children, it nevertheless, has many scary moments, and some elements of occultism and presents parents as stupid.

(Pa, B, O, V, A, D, M) Pagan worldview with moral elements encouraging reading, learning and friendship and discouraging child neglect with elements of telekinesis and extraordinary powers & a portrayal of parents as stupid; no obscenities or profanities but lots of name calling; many scary scenes including threats to children, woman spin girl by hair & throws girl, woman throws boy out window, woman kicks cat, threats to lock-up children, & threats with a whip; no sex; no nudity; brief alcohol use; smoking by disreputable parents; and, spitting & punishing child by force-feeding him until he almost vomits

The next adaptation of a Roald Dahl book is MATILDA. Matilda Wormwood is a six-year old girl of great intelligence. Her parents send her to school at the terrible Crunchem Hall, operated by the fearsome Agatha Trunchbull , who abuses the children. Matilda’s kind-hearted teacher Miss Honey, stands quietly by, unable to do anything about the cruelty. Matilda discovers that she has the power to move objects with her mind. As her parents neglect her and Ms. Trunchbull abuses her and her classmates, Matilda begins to execute a plan highlighting her powers which will teach all the stupid and mean adults a lesson.

Director Danny DeVito crafts an artistic and stylistic story about child neglect, child abuse, learning, love, and regrettably magic. Little children will be scared by Ms. Trunchbull . Her cruelty can be unrelenting. Many parents will be concerned about the portrayal of parents as stupid and the use of telekinetic powers in the movie. Matilda makes it appear that a deceased person from Ms. Trunchbull’s past will come back and haunt her, if she doesn’t leave the school. If she was so smart, she could have thought up a plan without floating objects or ghost threats. It is an intelligent movie, more intense than HARRIET THE SPY, and similar to JAMES IN THE GIANT PEACH in mood and creativity.

Writer: Nicholas Kazan & Robin Swicord BASED ON THE NOVEL BY: Roald Dahl