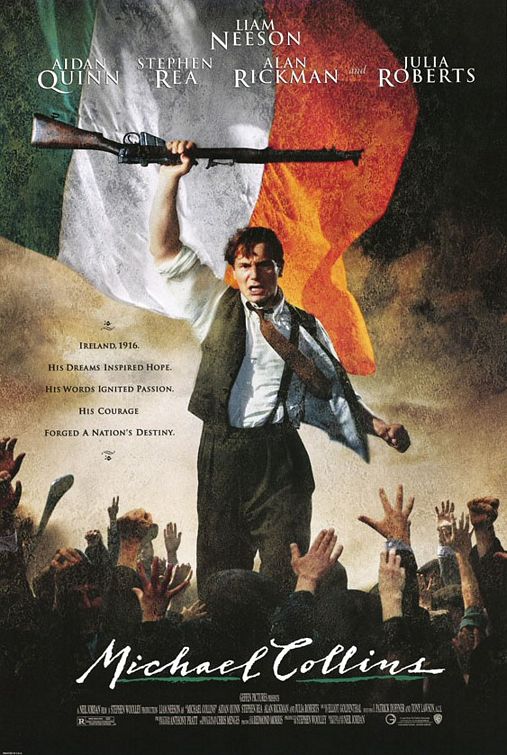 MICHAEL COLLINS, the story of Irish leader who incorporated terrorist tactics to bring about the Irish Free state in 1921, unintentionally supports biblical truths but under the umbrella of a nihilistic worldview. Hate does not make hate necessary, as Michael Collins states, nor does it justify terrorism, no matter what the desired goal. This movie would warrant four stars for production quality, if not for the poor performance by Julia Roberts. Graphic violence and offensive language warrant extreme caution.

(H, B, LLL, VVV, A, M) Nihilistic, humanist worldview where freedom is gained by destroying existing political institutions through anarchy & terrorism countered by the biblical reality that evil begets evil & profits nothing: 25 obscenities, 18 profanities & 7 vulgarities: graphic & extreme violence demonstrated through tortuous beatings, firing squad executions, numerous assassinations of government authorities, including a man shot through the head, a car explosion killing four, a molotov cocktail used to set a group of soldiers on fire, hangings, a man shot to death as he leaves church, another assassinated while he prays, war, killing, purposeful attacks on civilians, & a massacre at a rugby game; alcohol consumption; and, theft

MICHAEL COLLINS presents the story of the title character, ably portrayed by Liam Neeson. Beginning at the Easter Rising of 1916, we follow Michael Collins as he is thrust into the leadership role of the Irish Republican Army and initiates the terrorist tactics that eventually led England to the negotiation table and brought about the partition of Ireland and the Irish Free State. Today, the bloody terrorist tactics initiated by Michael Collins are still being employed by the IRA to accomplish political goals. The movie demonstrates that evil begets evil and not only destroys those who participate in it, but many innocents as well.

Production quality is high, except for a very weak performance by Julia Roberts. Graphic violence and offensive language warrant extreme caution for anyone who may wish to see the movie. Nihilism never proves itself as the high road to freedom. Evil does not necessitate evil in return. Hate does not necessitate hatred in response. To the contrary, Jesus Christ said to love our enemies and do good to those who hate us. Michael Collins will remain a controversial figure. To some he is a hero for having forced a change, to others a traitor for having settled for compromise. It all depends upon one’s worldview.