"The Rise of Genghis Khan" 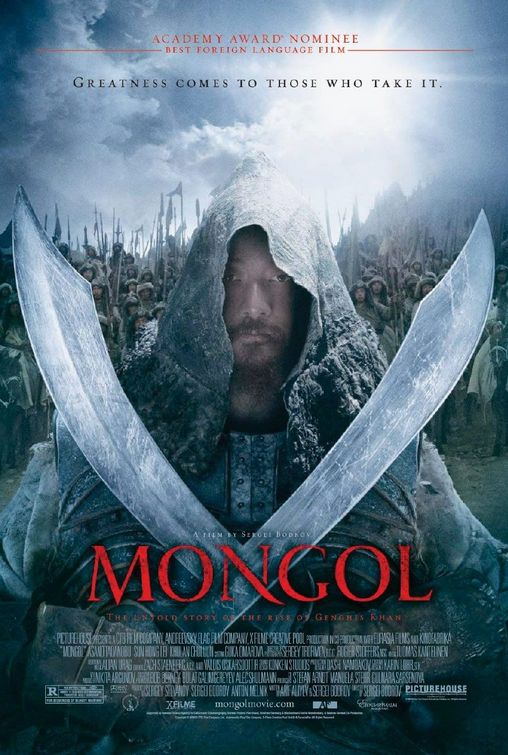 MONGOL is the first movie in a trilogy about the life and death of Genghis Khan, whose Mongol hordes began conquering China in 1206 and eventually conquered other lands, including Russia, under his sons and grandsons. This movie deals with Genghis Khan’s early life, including his marriage to a strong woman and his early battles with enemies and friends. Through long portions of the story, Genghis Khan is held as a slave, from which he escapes numerous times. Eventually, he faces a confrontation with a former ally, who became upset when his warriors began leaving him to serve the more benevolent Genghis Khan.

MONGOL gives a more nuanced portrayal of Genghis Khan than many people are used to getting. It sometimes slips into hagiography. The movie also relies upon a conjecture about a missing 10-year period in his life that slows down the story a little. This sequence is too long and passive. MONGOL contains some strong foul language, very strong violence at times, mature themes, a sex scene in shadow, and a vague homosexual allusion in one scene. Therefore, although it is often an impressive epic, it warrants extreme caution.

(Pa, B, RH, FRFR, Ho, L, VVV, SS, N, AA, D, M) Matter-of-fact, mixed pagan worldview about an historical figure that extols marriage, courage, fortitude, resilience, and liberty as opposed to slavery and mentions Hell at one point, but the history may be a little too revisionist, though it also seems to serve as a proper correction of some false assumptions, plus some strong false religious aspects such as hero worships a sky god (who may be a primitive de-evolution of Adam’s knowledge of the One True God of the Bible) as well as some historical allusions to Buddhism in Mongolia and China and a vague homosexual allusion in one scene after two men become drunk in celebrating a victory one night; seven obscenities, including a few “s” words; some very strong battle violence with spraying of blood includes troops battling, forced imprisonment, sword fighting, cavalry charging, man poisoned to death, and arrows shot and hit people sometimes; depicted sex in shadow and man’s wife is kidnapped and there is a question about the paternity of her first son, but husband accepts son as his own child, plus a vague homosexual allusion in one brief sequence when two men get drunk while celebrating a victory; brief upper male nudity at times; alcohol use and drunkenness; no smoking; and, kidnapping, slavery, jealousy, and attempted stealing, but mostly rebuked implicitly.

Sen. John Kerry, who once disparaged Genghis Khan while berating American troops in Vietnam, would not be pleased with the foreign language epic MONGOL, the first in a planned foreign language trilogy about the great Mongolian conqueror. The movie gives a positive spin to Genghis Khan’s early life.

Directed by Russian director Sergei Bodrov, the movie starts in 1172 with 9-year-old Temudgin, Genghis Khan’s real name, riding with his father to find a bride for Temudgin to marry later. His father wants to make amends with the Merkits, a fierce tribe from whom he kidnapped Temudgin’s mother by making an arranged marriage with one of their girls for his son. On the way to the Merkits, however, Temudgin picks out another girl from a friendly tribe. Her name is Borte.

On the way back to their tribe, Temudgin’s father is poisoned to death by an enemy group of Tartars. The other men of Temudgin’s clan shun Temudgin and his mother. Their leader, Targutai, even threatens to kill Temudgin when he grows up. Targutai enslaves Temudgin while Temudgin’s mother lapses into poverty.

Then, a cocky tribal prince named Jamukha discovers an escaped Temdugin lying unconscious in the snow. The two boys become blood brothers, but Targutai finds Temudgin and enslaves him again. Temudgin breaks free again and makes his way to a Sacred Mountain to worship Tengri, God of the Blue Sky.

Temudgin manages to elude his enemies until 1186. Now a young man, he is nevertheless captured by Targutai again. Temudgin finally manages to secure a horse, however, and goes in search of Borte. Borte has not forgotten him, so the two are married. They go to Temudgin’s mother, but the Merkits learn of the marriage, and the Merkit khan or chieftain kidnaps Borte.

Temudgin enlists Jamukha’s help to free his bride, even though Mongols do not wage war over women. A great battle ensues. They free Borte, but Jamukha takes his share of the booty mostly for himself while Temudgin distributes his share equally to the others. This kindly action bemuses Jamukha, but not when two of his own warriors leave Jamukha’s clan for Temudgin’s. Jamukha’s real brother decides to take revenge secretly by raiding Temudgin’s horses, but he is killed in the attempt. This sets Temdugin and Jamukha on a collision course that eventually will lead Temudgin to become Genghis Khan, Supreme Ruler of all the Mongols.

MONGOL gives a more nuanced portrayal of Genghis Khan than many people are used to getting. It sometimes slips into hagiography, however. Then again, Genghis Khan was definitely a man of his times — times that could indeed be brutal. In fact, one thing you learn researching his biography is that he allowed for a certain degree of religious freedom, even to Christians.

Of course, much of Genghis Khan’s early life is based on conjecture and legend. Thus, director Sergei Bodrov relies greatly on one Russian source, which surmises that, during one missing 10-year period of his life, Genghis Khan, or Temudgin, probably was captured and put in prison. In MONGOL, therefore, Bodrov has Jamukha sell Temudgin to slave traders, who take him to a prison in the Buddhist state of Tangut. Apparently, the other two movies in this trilogy will describe how Genghis Khan conquered Russia and began to conquer China, including Tangut.

Regrettably, this conjecture about the missing 10 years of Genghis Khan’s life slows down the movie. Thus, it takes a long time to get to the final battle between Temudgin and his old friend Jamukha.

There is some strong foul language in the English subtitles to MONGOL. The violence in the battle sequences is very strong at times, with some blood spraying. Furthermore, there is a sex scene in shadow and one scene where the movie vaguely implies that a drunken Temudgin and Jamukha have a homosexual encounter one evening. This negative content requires extreme caution. Otherwise, this is an impressive movie about a historical figure of whom most people know little.