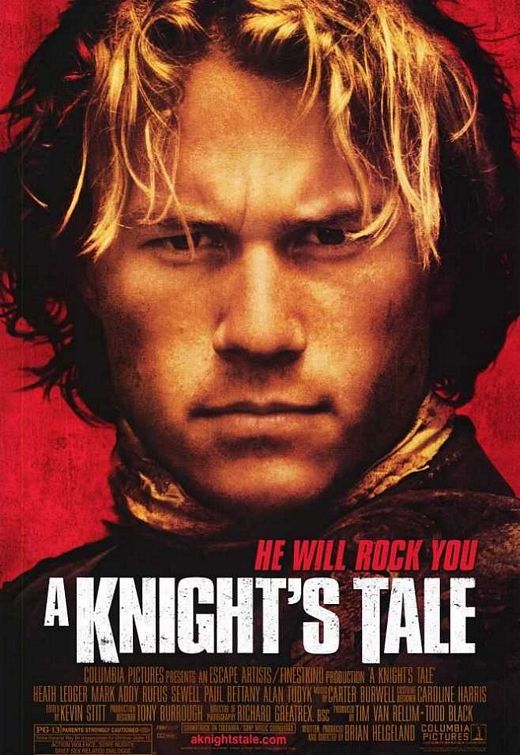 Heath Ledger of THE PATRIOT stars in A KNIGHT’S TALE, where he plays a commoner named William who enters jousting tournament as a knight to help feed himself and his friends, even though posing as a knight without a noble lineage puts his life in jeopardy. William falls for the witty Jocelyn. Jocelyn has kept her virtue because she doesn’t want to be a medieval wife. The rotten Count Adhemar also has his eye set on Jocelyn and tries to defeat William’s plans to win the grand tournament and take Jocelyn’s for himself.

A KNIGHT’S TALE is a warm, friendly, entertaining movie with lots of good things in it, including a great father-son relationship, a woman of virtue, bad behavior rebuked, and many positive references to God. However, the movie is flawed: it is too long; it tries in a very guarded way to push the envelope (even inserting a naturalistic nude scene); the jousting sequences are often too tame; and, the addition of rock music and modern dancing does not succeed. Even with all its flaws, however, A KNIGHT’S TALE entertains the audience with its tale of knights and Christian chivalry

Any movie that ends with the line, “God save you, if He so wills,” must have some merit. So it is with A KNIGHT’S TALE, a warm, friendly, entertaining movie with lots of good things in it, including a great father-son relationship, a woman of virtue, immoral and ill-conceived behavior rebuked, many positive references to God, and even some Christological allegories. However, regrettably, the movie is also flawed: it is too long; it tries to prove to the audience that it is not prudishly moral by pushing the envelope in a very guarded way, such as several naturalistic scenes of male nudity; the jousting sequences, which are the heart of the movie, are often too tame and lack jeopardy; and, the anachronistic insertion of rock music and modern dancing, the very elements that are being used to promote the movie, detract from the story, even though they almost succeed at times.

The movie opens up at a jousting match, while the audience, storybook fashion, is told that jousting was the favorite sport of medieval times. Like a modern audience at a WWF wrestling match, the crowd breaks into a rock song incorporating a wave, but soon the mood returns to Chaucerian times.

The knight who is in first place, Sir Ector, is mortally wounded. When Sir Ector dies, his squires are desperate because they’re out of money and out of food. One squire, William, played by Heath Ledger of THE PATRIOT, decides that he will wear Sir Ector’s armor and ride for him in the last joust. If William can just keep his seat on the horse, he will win the purse. Moreover, he has always wanted to be a knight. The other squires, Roland and Wat, tell Willaim that he is putting his life in jeopardy, because only knights who are of noble blood can joust in a tournament. As they argue, two men hang on the gallows behind them.

William rides in the tournament anyway, and just for barely keeping his seat, he wins 15 coins. William demands that they use the money to enter another tournament.

On the way to the next tournament, they meet a man walking naked down the road. This man turns out to be Geoffrey Chaucer himself, of CANTERBURY TALES fame, although they have never heard of him. Quite obviously, Chaucer has lost absolutely everything gambling. He makes a deal with the three young men: if they dress him and take care of him, he will draw up phony papers of heraldry, giving William a royal background as Sir Ulrich of Lichtenstein, and, Geoffrey will serve as Sir Ulrich’s personal herald to announce his jousts.

Riding through town, William sees the noble Jocelyn and falls for her immediately. Jocelyn has kept her virtue and doesn’t want to be a subservient medieval wife. The rotten Count Adhemar, played well by Rufus Sewell, also has his eye set on Jocelyn. He tells her that he will win the tournament for her. A master of witty repartees, She responds that he is just saying that because he wants her as another trophy. Count Adhemar is furious that William, without any style or finesse, proceeds to win some of the tournaments. William also is the only one with the courage to take on the Black Knight, Prince Edward, and yet, is so noble of heart that he allows the Black Knight to finish well after he has beaten him.

As they proceed to the grand tournament in London, it is revealed that William is the son of a poor thatcher, who gave William to Sir Ector to serve as his squire so William would improve his lot in life. Count Adhemar discovers William’s true family history and has William arrested and put in stocks. In these poignant scenes between William and the Count, there are some clear Christological allusions, and there is no doubt that a miracle needs to take place, or Count Adhemar will win the tournament and the hand of fair Jocelyn.

A KNIGHT’S TALE, like FIRST KNIGHT (starring Sean Connery and Richard Gere) before it, defines the nature of a Christian worldview, in the sense that these people live and move in a culture defined by Christianity. Even the minor characters reflect this Christian worldview. For instance, as William and his friends ride to a tournament, a common man in the background is waxing elegant about Peter’s denial of Christ. Thus, Christianity and the church is a central part of the story, and prayers and references to God are consistent and constant.

Regrettably, there’s also some very mild humor revolving around the church. When William rides a horse into a church to follow Jocelyn, a stuffy bishop rebukes him and makes comments about Jocelyn that are dripping with innuendo. Also, when a Frenchman challenges one of William’s English squire with the comment, “The pope is French,” the squire responds ignorantly, “Well, Jesus was English.” None of this humor is presented in a blasphemous way, however. Furthermore, although there are a few ribald moments, they too are very muted.

Brian Helgeland, the director, writer and producer, has written great screenplays such as L.A. CONFIDENTIAL (not a recommended movie because of its extreme violence) and CONSPIRACY THEORY (which is recommended for mature audiences), but, A KNIGHT’S TALE is not one of them. Here, he tries valiantly to be nice, kind and genteel, but he fails to tell a compelling story because he does not build the suspense and invoke the jeopardy which made his other stories so superb. He does, however, make a lot of moral and redemptive points, and he shows a great deal of joie de vivre. He directs the actors well, although he is helped by Rufus Sewell, who gives another great performance as a truly evil Count Adhemar, and Paul Bettany, who gives a brilliant performance as Geoffrey Chaucer.

In spite of its defects, A KNIGHT’S TALE is entertaining. At times, the movie plays like a toned-down MONTY PYTHON AND THE HOLY GRAIL meets FIRST KNIGHT. One wonders if Mr. Helgeland was editing the movie and discovered it was too soft, and therefore added the rock music to give it a dimension it lacked, or perhaps, Mr. Helgeland was just trying to capture the eclectic spirit of Chaucer. Even with all its flaws, however, Mr. Helgeland has entertained the audience well with his tale of knights and Christian chivalry.