A RAGE IN HARLEM 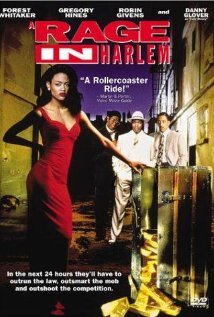 A RAGE IN HARLEM is a demeaning portrayal of Christianity that begins with a shoot-out over a trunk of stolen gold down South and ends up in 50s Harlem, where a churchgoer enlists the aid of his con man brother to track down a seductress who's stolen his life savings. The offensive elements run the gamut: multiple and graphic murder; crooked police; transvestites and prostitutes; revenge; a hundred obscenities and profanities; and, a grotesque striptease/simulated-fornication scene.

Depicting that “the love of money is a root of all kinds of evil” (with emphasis on ALL kinds of evil), A RAGE IN HARLEM is an action comedy set in 1950s Harlem in which a churchgoer enlists his con man brother to track down a seductress who has stolen his life savings.

The story begins way down South in a little juke joint in Mississippi, as a slimy bad dude named Slim, his vamp girlfriend Imabelle and a small band of thugs try to unload a trunk of stolen gold on some good ol’ boys. Several racial slurs and shotgun blasts later, Imabelle flees with the gold to Harlem.

Imabelle seeks out Easy Money, a crime boss who will buy the gold, but suffers a setback, then meets Jackson, a dutiful accountant at the neighborhood funeral parlor. Portrayed (laughingly) as a God-fearing, naive young man, Imabelle seduces the virgin Jackson at the undertaker’s ball. Under the influence of the corrupt Imabelle, Jackson’s moral fortitude quickly fades, and they fornicate again, this time under wall pictures of Jesus and Jackson’s mother, which are superimposed intermittently on the screen as the two copulate.

After stealing Jackson’s virginity and his life savings, things take a turn for the worse for Imabelle when Slim and his bad boys come looking for the gold. Jackson reluctantly enlists the aid of his shiftless stepbrother Goldy, who agrees to help Jackson rescue Imabelle upon learning that a trunk of gold is involved. However, when Goldy’s transvestite lover Big Kathy gets killed in the action, he is overcome by a rage that cannot be contained.

Set in the jazz clubs and ballrooms of Harlem in 1956, a RAGE IN HARLEM is a trip through the seamier side of life. The offensive elements run the gamut: multiple and graphic murder; crooked police who shoot first and ask questions later; transvestites and prostitutes; revenge; a hundred plus obscenities and profanities; and, a grotesque striptease/simulated-fornication scene.

According to Zakes Mokae who plays Big Kathy, the message in this dark world (and in the film) ends up being not so much that the underdog can outwit the system, but that the pleasure is sweeter when there is someone with whom to share it. “It’s about brotherhood,” he says, “it’s about relationships, man to man, it’s about humanity.”

“What causes fights and quarrels among you? Don’t they come from your desires that battle within you? You want something but don’t get it. You kill and covet, but you cannot have what you want. You quarrel and fight. You do not have, because you do not ask God. When you ask, you do not receive, because you ask with wrong motives, that you may spend what you get on your pleasures. You adulterous people, don’t you know that friendship with the world is hatred toward God? Anyone who chooses to be a friend of the world becomes an enemy of God.”

A RAGE IN HARLEM is pure unadulterated immorality and should serve as a reminder to plead with God to pour out His Spirit so that revival will cleanse our nation.