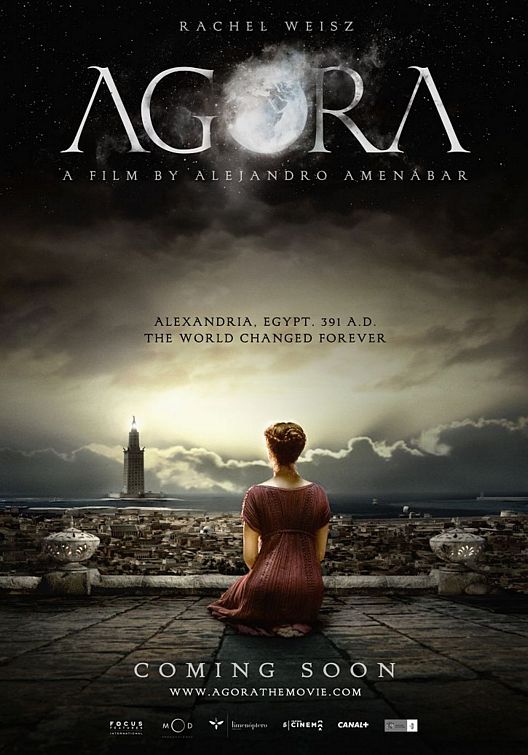 AGORA is a well-made attack on Christianity that’s also a biography of the female pagan philosopher Hypatia, who lived between about 370 and 415 A.D. The movie falsely claims that Christians burned down the ancient library in Alexandria in 391 A.D. after a pagan mob started killing Christians. It also falsely claims that the Christian Patriarch of Alexandria, Cyril, declared Hypatia to be a witch, which led to her murder by some Christian zealots under Cyril’s rule in 415 A.D. This historical period is set against the backdrop of an unrequited love triangle between a slave and Hypatia, and Hypatia and Alexandira’s mayor at the time, a Christian named Orestes.

In reality, Julius Caesar accidentally burned down the great library when he attacked Alexandria in about 48 A.D.!!! Also, there is no evidence that Cyril directly had anything to do with Hypatia’s murder. The sets in AGORA are awesome, the crowd management is superb, and the acting is excellent. But, all this good work is designed to promote slanderous lies and foment venal, abhorrent Anti-Christian hatred. The title of the movie refers to the marketplace in Alexandria where religious debates took place.

(HHH, AbAbAb, RHRH, C, B, VVV, SS, NN, A, MM) Very strong humanist, Anti-Christian worldview full of propaganda and blatant historical falsehoods mixed some historical truth, which depicts some historical Christian figures in the worst possible light but leaves a couple other real-life Christians alone; no foul language; one extreme shot of a decapitated corpse and some strong violence with some blood includes mob riots, people (including woman) stabbed, older man has terrible head wound, younger man hit in head with a stone, people are stoned, and naked women is strangled to death and then stoned, mob storms gates and enters pagan temple area to destroy statues and deliberately burn scrolls (though the latter activity never took place historically as the movie claims in its effort to slander Christians and Christianity); man takes woman into his arms and gropes the dress over her breasts but does not assault her otherwise; obscured upper female nudity, rear female nudity as woman comes out of bath, and mob takes off woman’s clothes but viewers mostly see her rear end; alcohol use; no smoking or drugs; and, bigotry exposed but some of it is propaganda filled with historical inaccuracies to make some Christians look worse than they actually were, although they did indeed do some bad things, and lying and deceit.

AGORA, an historical drama set in Alexandria at the turn of the Fifth Century is an international production in English that distorts history and slanders Christianity by making the church leaders in the city at the time much worse than they really were.

The story centers on the female Neo-Platonic pagan philosopher Hypatia who was murdered by a small, angry Christian mob in 415 A.D. because they believed that she was preventing a reconciliation between the Roman mayor, or prefect, and the Bishop, the famous theologian Cyril of Alexandria, also known as the Pope of Alexandria (back then, the Pope of Rome was only considered first among equals). The movie conflates historical details with purely made-up historical fiction that paints the Christians in Alexandria and Cyrus in the worst possible light.

The movie opens in 391 A.D. where Hypatia is teaching astronomy to a mixed class of Christians and pagans. One of her slaves is Davus, a young man (a fictional character) who worships Hypatia from afar. Davus is also impressed by the Christian preachers in the marketplace, called the Agora, though the movie paints the ringleader, Ammonius, as a charlatan.

The preaching of the Christians upsets the pagans. So, sanctioned by Hypatia’s mathematician father, Theon, the young pagans turn into a mob that starts killing Christians in the streets. The Christians start to fight back. By this time in history, their number is larger than the pagans, so, in the movie, they eventually storm the gates of the famous library of ancient writings and the pagan temple nearby. Led by the bishop at the time, Theophilus (Cyril’s uncle), the Christians overrun the library and the temple, destroying the pagan statues and the ancient scrolls in the library. By this time, Davus is now one of the Christians. He physically declares his love for Hypatia by taking her in his arms and groping her breasts, but she frees herself from him and leaves.

Some years pass, and one of the young pagans, Orestes, is now the Roman mayor of Alexandria. Like Davus, Orestes too loves Hypatia, but Hypatia is obsessed by her astronomical studies. She is trying to figure out what is really happening in the solar system because Ptolemy’s convoluted system of the sun travelling around the earth doesn’t make mathematical sense. His view about the orbit of the other planets also offends her Platonic sense of symmetry.

By this time, Davus is part of a group of Christians who defend Christianity and Cyril by persecuting Jews and pagans. The group is led by Ammonius. Orestes, who also has become a Christian, tries to control the passions in the city, but the Christian zealots stone the Jews attending a musical concert, and the Jews retaliate by luring the zealots into a church, locking the doors and stoning many of them to death. This latter action enrages Cyril who, with help from Christian mobs led by the zealots, instigates attacks on the Jews in the city, killing and burning many, looting their possessions, and driving the rest out of Alexandria.

Next, Cyril and the zealots turn their attention to Hypatia. They try to force Orestes into bowing before one of Paul’s writings that Cyril says shows that women like Hypatia, who Cyril says is a witch, should remain silent. Orestes refuses, despite the cries of the Christian mob gathered by the zealots. Ammonius throws a stone that hits Orestes on the forehead, and Orestes has him executed. In retaliation, the zealots plan to murder Hypatia, but Davus eases her pain before they can stone her by strangling her to death.

If Mel Gibson had made a movie like AGORA depicting the Jews like AGORA depicts Cyril and the Christian leaders in Alexandria, the filmmakers of AGORA would call him a hateful Anti-Semite. While it is true that Cyril’s uncle did destroy pagan statues in the pagan temple area of Alexandria in 391 A.D., in reality it was Julius Caesar, way back in 47 o4 48 B.C., accidentally burned down the library when he attacked Alexandria in pursuit of Pompey. Thus, by the time this movie takes place, there was no library of ancient Greek texts in Alexandria!!! Furthermore, there is no evidence whatsoever connecting Hypatia to any library in Alexandria at all! In fact, the movie’s contention that Hypatia was connected to the famous library is a lie spread by Carl Sagan in his infamous COSMOS program on TV (“The Mysterious Fate of the Great Library of Alexandria,” http://www.bede.org.uk/library.htm)!

Also, although Cyril did indeed have a harsh rule in comparison to other Christian leaders before and after him, and did indeed expel the Jews out of Alexandria against the wishes of Orestes, there is no solid evidence that he led a murder campaign against the Jews or that he had any role in the murder of Hypatia. In fact, the actual historical record shows that the Jews, not just the Christian mobs, also willingly took part in the fighting that often occurred among the religious factions in the volatile city of Alexandria. Also, Hypatia’s murder apparently was instigated by a minor layman in Cyril’s church named Peter. Apparently, Peter and his cohorts thought, wrongly, that Hypatia was preventing Orestes and Cyril from reconciling with one another.

The question arises, what was Cyril of Alexandria really like?

Well, some Catholic scholars like Alban Butler tend to view Cyril in a more favorable light than Protestant scholars like Philip Scaff (THE HISTORY OF THE CHRISTIAN CHURCH) or secular scholars like Edward Gibbon (THE RISE AND FALL OF THE ROMAN EMPIRE, a book full of slander and lies like this movie, AGORA). In reality, Cyril probably was much too harsh in his rule and did not always live according to his faith, but some of his theological works and efforts helped to support some important theological doctrines established by the Bible, the Word of God. That said, it becomes clear in doing the historical research for this movie that the filmmakers have invented many lies about the history in AGORA so that they can depict Cyril and the vast majority of Christians in Alexandria at the time in the worst possible light. Ultimately, the movie aims to falsely accuse Christians and Christianity of being opposed to the kind of scientific investigations that scholars like Hypatia enjoy doing. The biggest false claim is that the fictional burning down of the library in Alexandria is what led to the so-called Dark Ages, another exaggeration or lie against Christianity that atheists and other Non-Christians like to tell.

When it comes down to it, therefore, this well-made movie succumbs to the worst form of propaganda and Anti-Christian bigotry. If the filmmakers had set aside their lies and Anti-Christian bigotry, they could have made a truly great movie, especially considering the $50 million they reportedly had at their disposal. The sets are awesome, the crowd management is superb, and the acting is excellent. But, all this good work has been wasted to serve the venal, abhorrent Anti-Christian hatred of pagan and atheist liars like the late Carl Sagan, Christopher Hitchens, Richard Dawkins, and Bill Maher.

What these people forget is that the Bible and Jesus clearly warns people that there will be alleged followers of God and Christ, who is the Word of God made flesh, who don’t have a personal relationship with Jesus and fail to follow his commands. That doesn’t excuse non-believers, however, from rejecting Jesus Christ. And, it certainly doesn’t excuse them from making up lies about Christians, including lies about Christians who fail to follow Jesus perfectly. As Paul writes in Galatians 5:6, “The only thing that counts is faith expressing itself through love.”