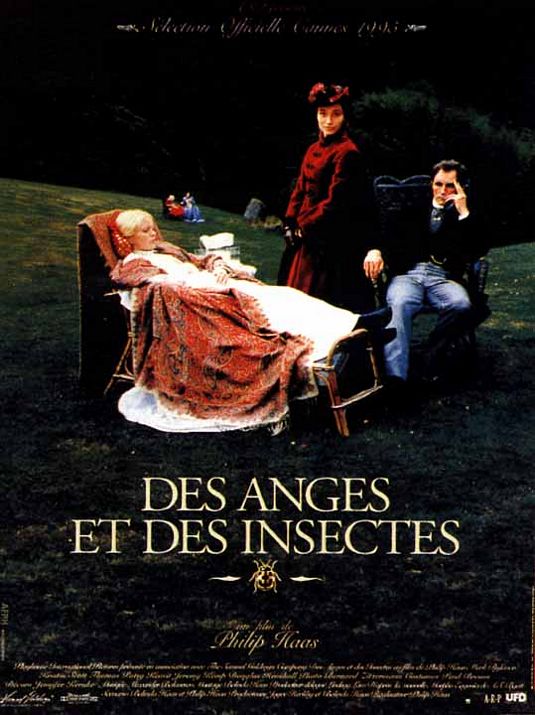 ANGELS AND INSECTS is set in the repressive Victorian era of the 1800s. A shipwrecked naturalist finds himself sheltered by the wealthy Alabaster clan who also gives him permission to marry their eldest daughter. The film has unsavory themes of suicide, incest and excessive human indulgences. It extols Darwinism and shows several graphic and explicit sexual scenes.

The film ANGELS & INSECTS explores the high-strung formalities of the Victorian era. William Adamson has just come from the Amazons into the sprawling mansion of the Alabaster clan after being shipwrecked. Kind but ineffective Lord Alabaster gives him a job and permission to marry his daughter. As the euphoria of their marriage wanes, William develops an attachment to the nanny Matty, who shares his passion for red ants. Even as the ants show cohesiveness in their habits, the Alabaster clan is falling apart. Lady Alabaster seals her fate with her voluptuous appetite, Lord Alabaster is increasingly dispirited, and son Edgar alternates between insulting William and fornicating with servant girls.

ANGELS AND INSECTS is a formidable tale of privileged excesses that has carried its indulgences too far. The Alabasters’ ruinous tragedy is self-created, and the outsiders rise above the Alabasters’ web of decadence because of the good found in themselves. From cast to costumes, the film is precise to the emotions and the drama without ever resorting to cinematic excesses. The themes of promiscuity, adultery, incest, suicide, extreme self-indulgences, and a sympathy to Darwinism theories are augmented by several explicit sexual scenes.