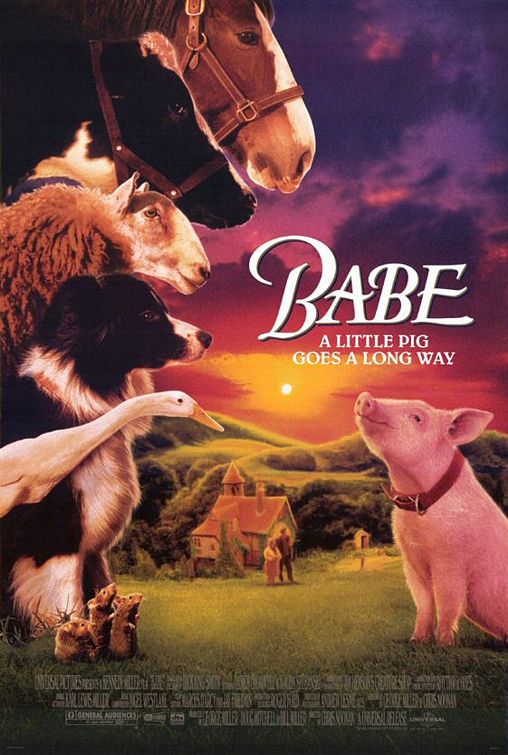 BABE is a winsome pig who has a knack for rounding up sheep. Using clever computer animation, the animals in Babe's world speak English to one another and sort out a most unusual occurrence. Babe, being a naive little pig doesn't realize there is a pecking order in the barn yard, and so he has to patch up dissention among the jealous sheepdogs. BABE has many moments of purity and pleasure that will virtually compel its viewers to love their neighbors.

On his arrival to the farm, a piglet, BABE, explores his world with abandon. First, Babe makes friends with a duck named Ferdinand, who thinks he is a rooster. Every morning, Ferdinand lets out a cockle-doodle-do, waking up Farmer Hoggett and his wife. Babe helps Ferdinand capture the competition: an alarm clock. Then, Babe begins to develop skill as a sheep herder. The sheep dog, Rex, is infuriated and attacks Babe. Yet, in a stunning climax, Rex learns to appreciate Babe when Farmer Hoggett decides to enter Babe in a sheep herding competition. Babe performs beautifully with Rex’s help, giving him high points at the judge’s table, cheers from the crowd and the admiration of all.

Although the human actors occasionally speak, 80% of the soundtrack is the animals talking. With seamless computer animation, the animals appear as if they are talking quite naturally. This realism is augmented by a barnyard reminiscent of old world charm, yet set in modern times. BABE is winsome and heartwarming because it is created with care and tenderness. Regrettably, BABE contains a few mild vulgarities. On the other hand, it has many moments of purity and pleasure that will compel its viewers to love their neighbors.