BACK TO THE FUTURE III 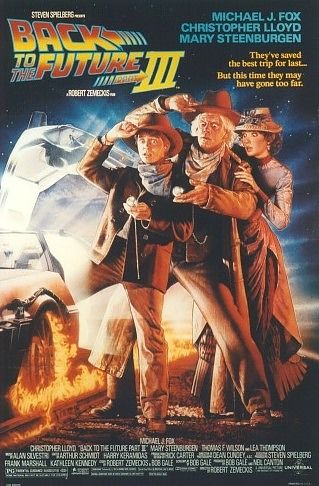 Half-dozen obscenities and some violence including gunfights and a barroom brawl.

Picking up where Part II left off, Part III begins with Marty, who’s been left behind in 1955, taking an 1885-dated letter from Doc Brown to his 1955 counterpart. The letter states that the DeLorean time-machine has been buried and warns them not to come after him as further time disruptions could have serious repercussions.

However, when Marty and Doc uncover a library article describing Doc’s death in 1885 and later stumble upon his tombstone, Marty resolves to go after his friend. The DeLorean is unearthed and restored, and Marty travels alone to Hill Valley of the Old West. After a brief encounter with his Irish great-grandparents, Marty locates Doc, now the town blacksmith, and informs him that he’s going to be shot in a few days by Buford Tannon, the outlaw ancestor of Biff.

To complicate matters, the DeLorean is out of gas, but they devise a plan to use a locomotive to push it up to time-breakaway speed. Furthermore, Doc is reluctant to leave because he has fallen in love with Clara, a schoolteacher who shares his passion for science and Jules Verne.

It’s pure fun as Marty and Doc again race against the clock in the final moments to get back to the future. There are some great lines, such as when the duo commandeer the locomotive and the engineer asks, “Is this a hold-up?” “No!” they exclaim. “It’s a science experiment!”

Doc’s zany inventions, 1885-style, create an element of comedy, as do Marty’s figures of speech and movie cliches. For example, Marty goes by the name “Clint Eastwood”. He learns, too, a lesson to not let name-calling affect his judgment, a character flaw he was not able to overcome in the first two episodes.

Unfortunately, a half-dozen obscenities occur, but no profanities. There is some violence, but it’s relevant to the story line of the good guys defeating the bad guys. The movie concludes in 1985 with Doc announcing that no one’s future has yet been written: he exhorts: “Make it whatever you want… make it a good one.”

RECOMMENDED ACTION: Because of the obscenities, exercise caution if you see the film.

Watch BACK TO THE FUTURE III: