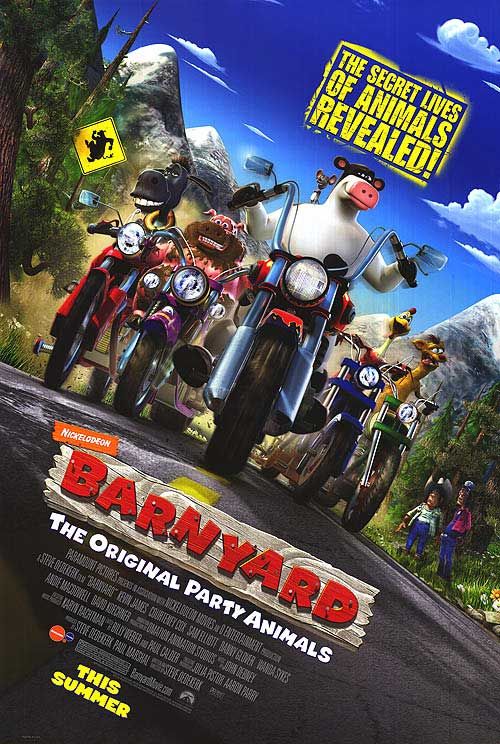 In the animated comedy BARNYARD: THE ORIGINAL PARTY ANIMALS, Otis is a bull (with a weird udder) and adopted son to the respected protector of the barnyard, Ben. Ben raises Otis hoping he will succeed him as leader and protector, but Otis rebels. He desires to live a life that is fun. When Ben is killed by coyotes while protecting the chicken coop, Otis is voted in as leader and needs to find his place and purpose. Otis must decide whether he will pursue his own selfish desires or step into his place and his responsibility to the barnyard.

BARNYARD has some laugh out loud moments and moments that bring you to tears. Sadly, it has some difficulties, including property destruction, stealing, gambling, drunkenness, and the fact that there is no such thing as a “male” cow in nature. The humor is sometimes crude, but the main story and messages are moral and uplifting. The movie stresses responsibility, mercy, protection of the weak, maturity, good parenting, caring, and good leadership. It also has a pro-adoption message. The fighting scenes with the coyotes and other elements may be too much for younger children, however.

(BB, Pa, Ab, E, Ho, L, VV, N, AA, MM) Ultimately strong moral worldview stressing responsibility, mercy, protection of the weak, maturity, good parenting, caring, and good leadership, mitigated by some pagan, off-color and bizarre, "Loony Toons," "Far Side," and "Silly Symphonies" elements such as male bull characters (called cows in the movie's production notes) have udders too while female cows with udders can give birth (giving the movie a weirdly androgynous, somewhat asexual tone except that when the cows dance or run, their udders may flop), animals seem to get drunk on "milk and honey" and use milk like alcohol, selfishness finally rebuked with greater good and self sacrifice as large focus, plus possible anti-Christian reference as pizza delivery boy with a stoner, San Fernando Valley voice saying “I'm a Lutheran” and brief animal-rights type environmentalism when animals say their farmer is a compassionate vegan who doesn't even use dairy products and apparently doesn't put the animals to work; one heck, one reference to the "Gates of Hell," a few words like "geez," and some crude bathroom humor such as anxious mouse poops on pig's head; lots of slapstick violence includes cows steal and bang up a car during chase scene and joyride to get revenge on a young, cow-tipper, cows scare mean boy, coyotes attack and try to strangle chickens, cows protect weaker animals by fighting coyotes and grabbing their necks, mule knocks farmer out three times to hide the fact that the animals can talk and stand on two legs, one animal killed, animals surf on a block of ice and get oil and chicken feathers on them, hitting, ferret struggles with his desire to eat chickens, and scary coyotes bite; no sex scenes and nothing salacious but widowed female cow is pregnant and later gives birth, brief points where male and female animals are attracted to one another; partial rear male nudity as boy's pants slip down, female cleavage seen when cows pass near a bar, cows have prominent, goofy-looking udders, and cows not accurately depicted as obnoxious udders occur even on the male cows (in reality there is no such thing as a male cow, a male cow is a bull so movie has created a new trans-gendered bovine, though the word "transgender" is not used and without today's perverted, feminist homosexual movement and other politically correct, Christophobic Neo-Marxists, the word "transgender" would be considered a wrong, irrational use of the English language); human man holds beer cans, animals appear to get drunk on milk and honey, husband is depicted as using beer to tune out annoying wife with mental issues; and animals treat milk like alcohol during joyride in stolen car; no smoking or illegal drugs, but woman says she takes medication; and, implied gambling when animal throws dice, car stolen and damaged extensively but not replaced, joyriding animals in stolen car try to evade police, revenge on mean boy who likes to "tip" cows but heroes show mercy to their evil enemies, motorcycles borrowed without asking, cow likes to play practical jokes, one incident of disrespect towards parents, and animals deceive humans and like to throw wild parties but they are forced to be more responsible.

BARNYARD is a fast paced, animated feature that tells a story of the relationship between a well-respected, responsible and honorable father, Ben, and his unruly, decidedly irresponsible adopted son, Otis. Otis has no desire to follow in his father’s footsteps and instead desires to be the life of the party. Otis lives to have fun, and although he loves his father, feels no responsibility to him. Ben, who emulates a loving and caring father, is also the protector of the barnyard. This story resembles the story of the prodigal son, as Ben gives his son over to his desires.

Otis talks his father into taking his shift as nightly guard of the barnyard and proceeds to the barn, where there is a makeshift bar complete with barrels of milk and honey, a stage, a band, wild music of all kinds, dancing, gambling, poker playing and ‘party animal” behavior. Ben is later killed by the coyotes while protecting the chicken coop. Otis is voted in as the perfect barnyard resident to take over his fathers position of being in charge, and he reluctantly accepts his new position, trying to make it his own.

As the barnyard grows out of control, Otis feels the burden of caring for his barnyard fighting against his desire to continue in his pagan, hedonistic lifestyle. He struggles with filling the BIG shoes left by his father, as he realizes his selflessness and the great man that his father was. He learns that “the best leader is the one who cares the most,” from a new pregnant cow who was rescued from a flood and brought as a new resident to the barnyard. Otis quickly develops a relationship with Daisy and is encouraged by her to be the best that he can be.

As the coyotes continue their attacks and threaten the barnyard, Otis must decide between meeting his own needs or seeing the needs of others as a greater purpose.

BARNYARD has laugh out-loud moments as well as moments that evoke tears. The characters are well developed, and engaging, and many smaller plots are evident. One example is a weasel struggling against his own baser instincts trying to not eat his friends from the barnyard. Another is a mouse who struggles with what it means to stand by your friend. Finally, an old and wise mule directs Otis in his quest to find and take his proper place in the barnyard and learn to “Stand his ground.”

What helps make BARNYARD work is the voice work by such actors as Kevin James as Otis, Sam Elliott as Ben, Danny Glover as Miles the Mule, Courtney Cox as Daisy the Cow, and Jeffrey Garcia as Pip the Mouse. Amid all the jokes and crazy behavior, a solid story about a caring group of characters emerges. The animation is serviceable and could have used some of the beauty, sheen and detail of the JIMMY NEUTRON movie, another Paramount cartoon movie from Nickelodeon.

Despite the strong positive messages in this movie, there are many problems and moral difficulties. There is unanswered stealing, glamorized gambling, drinking, sneaking out, disobeying the rules, defiance against authority, a strong party mentality, drinking, poking fun in one brief scene at those who might struggle with issues of mental health, using alcohol to tune out an annoying wife, unanswered destruction of property, and some obnoxious, but brief, potty humor.

The animation is Nickelodeon style, and very inaccurate with bulls not being bulls but unnatural “male” cows with udders, the udders are greatly oversized and very obnoxious and exaggerated. One wonders what the filmmakers might have been thinking in creating this transgendered bovine species. This is, of course “udderly silly” (pardon the bad pun), but, still, the male cows or bulls with udders behaved like males and there were no references or even insinuations of homosexuality. Attraction was very clearly between male and female. The characters in the movie spoke very fast making it hard at times to understand the dialogue. The story in BARNYARD was effective in emoting feeling and connection with the characters.

Ultimately, despite the off-color and bizarre elements, including a sequence about stealing a car and getting revenge on a mean human boy, BARNYARD contains a strong moral worldview through much of its conflict. The movie stresses responsibility, mercy, protection of the weak, maturity, good parenting, caring, and good leadership. Positive moral statements also are made such as: “A strong man stands up for himself, a stronger man stands up for others”; and, “The best leader isn’t the biggest leader or the strongest. The best leader is the one who cares the most.” The movie also has a pro-adoption message.

The fighting scenes with the scary coyotes and miscellaneous elements may be too much for younger children, however. Even so, pointing out the story’s positive moral messages will help media-wise parents encourage all their children to focus on how we all can be better, responsible and caring people. Also, tell your children that in reality there is no such thing as a male cow. A male cow is a bull so the movie has created a new transgendered bovine.