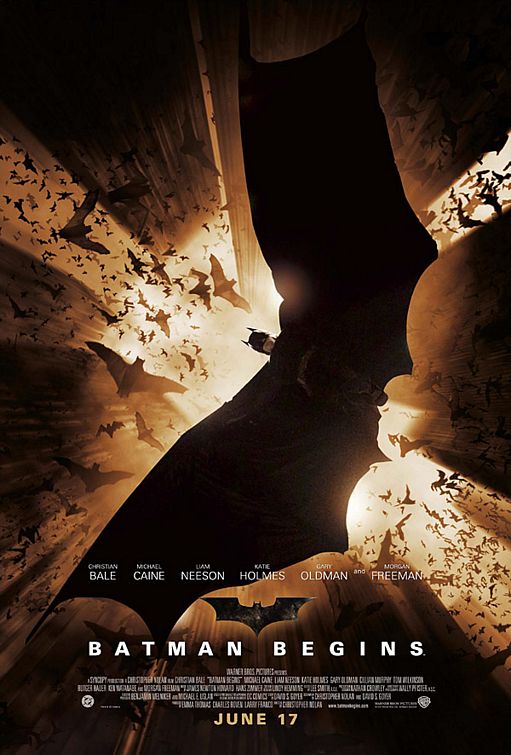 BATMAN BEGINS opens with Bruce Wayne’s parents being killed by a mugger. Inspired by this event, he researches the criminal mind and trains to be an expert fighter. After many years, he returns to Gotham City to find it a cesspool of crime and corruption. With help from his dedicated butler Alfred, Bruce becomes Batman, which allows him to get rid of his own reservations while giving criminals something new to fear. Batman begins his fight again injustice and corruption at breakneck speed, going after the biggest drug lord and his first villain, The Scarecrow.

BATMAN BEGINS is expertly made and acted, with little foul language and no sex, and a very positive noblesse oblige view of Christian responsibility that rebukes false religious notions. However, its bleak vision of Gotham City and some action violence make it too intense for children. Admirably, Batman seeks both justice and compassion and wants to save his home from drug dealers and crime bosses. He hates evil but does not believe in revenge. Instead, he works hard to make good triumph over bad. Entertaining and surprisingly thoughtful, BATMAN BEGINS offers a hero audiences can appreciate.

(BB, CapCapCap, CC, FRFR, Ab, L, VV, A, DD, M) Strong moral worldview that extols justice, compassion, “hatred of evil,” and hopefulness, and eschews revenge, with very strong pro-capitalist views supporting noblesse oblige (the Christian notion that those who are better off have an obligation to those who are less well off), strong individual responsibility, and strong false eastern religion combined with world conspiracy notions and man trying to force harmony on the world that is in fact rebuked by the fact that the practitioners are the bad guys, as well as one negation of God's supremacy by Batman; four light obscenities and two strong profanities; lots of hand-to-hand combat, guns fired, several explosions, parents shot in front of son but no blood shown, train derailment, car chase with crashes, city infected with non-deadly poisonous gas, man crushed, man’s protective suit set on fire, man hangs off cliff but is pulled to safety, and child falls down well where many bats fly past him; no sex; no nudity; alcohol served at party; illegal drug shipment is intercepted by Batman and stopped, hallucinogen used and drug traffickers are shown to be evil; and, petty theft, many police and government officials are corrupt and take bribes (strongly rebuked), cult shown to be false and evil, and good guys are against revenge.

Tim Burton’s BATMAN, starring Michael Keaton and Jack Nicholson, came out when I was a child. I was incredibly excited about seeing it and finally manipulated my dad into taking me. Maybe it was the movie’s dark tone, maybe it was the paranoia-inducing plot about Gotham City being poisoned by household goods, maybe it was just Jack Nicholson in that scary makeup, but I had some bad nightmares after seeing that movie.

The new one, BATMAN BEGINS, might have a similar effect on a new generation of elementary schoolers. Its bleak vision of Gotham City is probably too intense and surreal for most children. Director Christopher Nolan of MEMENTO clearly set out to make a Batman adventure that adults can enjoy as much as the younger audiences that typically get excited about a superhero movie. As a result, BATMAN BEGINS is a much more somber, slower paced movie than the colorful SPIDER-MAN.

The movie begins in the first chapters of Bruce Wayne’s life, when his goodhearted parents gave lots of their wealth back to the city that embraced and supported their business. After his parents are killed by a mugger, Bruce (played by Christian Bale) is emotionally scarred and eventually travels the world to learn more about the criminal mind. He is plucked out of an Asian jail by a mysterious man named Ducard (Liam Neeson), who helps train Bruce to be a virtually unbeatable fighter. Once Bruce learns the subversive nature of Ducard’s organization, however, he deals a sharp blow to their plans and returns to Gotham.

Remembering his parents’ penchant for charity and compassion, Bruce Wayne wants to restore Gotham City to its former grandeur by wiping out the corrupt cops and sleazy crime bosses. He gets help from his dedicated butler Alfred (Michael Caine) and an engineer at Wayne Enterprises, Lucius Fox (Morgan Freeman). Bruce invents a new identity allowing him to get rid of his own fear while striking fear into criminals.

It doesn’t take long for everyone in the city to know about Batman. The criminals learn even quicker, after the most notorious drug transporter in the city is strung up and arrested. Batman begins his fight against injustice and corruption at breakneck speed, encountering his first villain, The Scarecrow.

The bad part about fighting criminals is that they fight back, so BATMAN BEGINS contains a lot of hand-to-hand combat and several big explosions. There is gunfire, but no one is hit except for Bruce’s parents at the beginning of the movie. Batman is never cruel when fighting enemies, as he wants only to subdue them, not kill them. This fact tempers the violence. Batman practices compassion alongside justice, and the movie makes this explicit to viewers who might otherwise have missed it.

Bruce’s flame Rachel tells him, “It’s not who you are underneath, but what you do that defines you.” Although the statement could be interpreted to mean that good acts can earn righteousness, it agrees with the Bible in so far that men will be known by their fruit. The fruit, in this case Bruce Wayne’s defense of the good people and pursuit of the bad, should be seen as an extension of his deep desire to help others. Bruce Wayne/Batman is mostly admirable for his idealism and the steps he takes to enact it.

It is also a joy to see a movie that is pro-capitalism and revives the Christian principle of noblesse oblige, which is the Christian notion that those who are better off have an obligation to those who are less well off. Of course, this is part of strong individual responsibility. Interestingly, there are strong false eastern religion doctrines combined with world conspiracy notions presented in the beginning of the movie that include an elite group of men trying to force harmony on the world. The great news is that this false religion and philosophical view is in fact rebuked by the storyline that the practitioners are the bad guys whose views turn out to be megalomaniacally insane.

What’s very impressive about the movie is that, for a superhero blockbuster, Bruce Wayne’s transformation into Batman is gradual and organic, recalling little of the silliness of comic books or the 1960s television series. Serious, skilled performances by all of the actors further enliven the movie. Everyone in it is a professional, and their work combines for an enjoyable, believable, absorbing fantasy adventure.

Again, for its intense moments and frequent action violence, BATMAN BEGINS is not suitable for young children. However, with little foul language, no sex or nudity, and some very solid filmmaking, many people will have fun in this summer popcorn flick.