BEYOND THE FARTHEST STAR 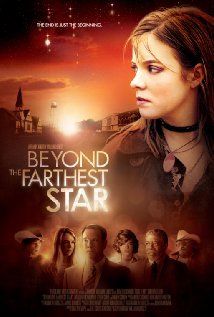 BEYOND THE FARTHEST STAR tells the story of Adam Wells, a small town preacher running from a disappointing past. Adam’s wife, Maureen, is being destroyed by secrets. Their teenage daughter, Anne, is rebellious and depressed to the point of possible suicide. Family secrets are unearthed as the national media arrives to publicize the pastor’s fight to protect the church’s public nativity display from a powerful retired senator. As each character wrangles with his or her personal demons, Anne finds out a family secret and searches for her identity.

BEYOND THE FARTHEST STAR is artistically produced, with compelling performances. The plot twists and subplots are hard to follow at first, but everything comes together eventually. Ultimately, BEYOND THE FARTHEST STAR is a dark but moving drama about the importance of truth and family for people’s spiritual and physical wellbeing. Though the movie’s tone is sad and serious, the characters find redemption in their love for one another and in God’s faithfulness. Caution is advised for children, however, due to some violence and mature subject matter dealing with alcoholism, unwed pregnancy and adultery.

(CCC, BBB, L, VV, S, AA, D, MM) Very strong Christian, moral worldview in dark but touching and redemptive story; three light profanities; moderate violence as a teenager shoots his abusive father after being beaten, next, he shoots at a pastor, and then shoots repeatedly through a wall in an attempt to shoot a friend; mild sexual content, such as girl asks if boy is going to “put his lips on” her mouth, they kiss once later, characters mention rape and dancing on tables, and a wife is seen sending secret emails and is later kissed on the forehead by an old high school boyfriend; no nudity; moderate alcohol use, a wife is seen drinking secretly, her husband is later mildly drunk and angry, a father becomes abusive when intoxicated and is stopped by the police and threatened with a breath test; some smoking, a teenage girl is told to stop smoking and is seen afterwards with a cigarette in her mouth, an older man is seen smoking; and, a boy is under parole, arson is committed and prosecuted, and multiple families, friendships, and marriages are dysfunctional and broken.

BEYOND THE FARTHEST STAR tells a dramatic story of beauty from brokenness and the freedom of truth and forgiveness.

Although famous as a child prodigy for his preaching ability, Adam Wells is now a disappointed pastor who has moved his wife and daughter to yet another small town, this time in Texas. Soon the national news has arrived in their tiny community to cover Pastor Well’s fight for freedom of religious expression against an angry retired senator living in the town. Strong Christian, biblical themes draw the fractured characters to eventual redemption in this dark but touching tale.

Adam Wells married his childhood sweetheart Maureen after she was raped in a local parking lot. Years later, their only daughter Anne is struggling with suicide and a frustrated, gloomy outlook on life as she assimilates into a new school and joins a trio of troubled young men with whom she forms a rock band. Adam’s wife Maureen is also fighting temptation to connect with an old high school flame and is a closet alcoholic.

Meanwhile, Adam faces a challenge in the new community as a powerful retired senator blatantly burns down the church’s nativity. The senator is angry that his wife, whom he rescued from a strip club, now believes the senator is the one in need of saving by God.

While Adam fights for the church’s damaged nativity scene, Anne grows close to Stephen, one of the boys in the band. However, Stephen’s best friend, Kyle, feels threatened by their relationship and is simultaneously injured by his abusive alcoholic father.

As the media descends on the Wells family, secrets begin to emerge. This causes intense family conflict. Then, two characters make decisions that bring everything to a head.

With multiple twists and subplots, BEYOND THE FARTHEST STAR proves somewhat difficult to follow at first. Eventually, though, the threads are woven together into a redemptive ending where the truth provides freedom and new life for a broken family.

The production quality in BEYOND THE FARTHEST STAR is good, with artistic flashbacks and authentic costuming. The acting includes touching performances by the main actors as they convey pain and frustration with the secrecy in their lives. Best of all, Christian themes of redemption and new life pervade the story. However, moderate violence, discussion of sexual promiscuity, drunkenness, and an overall dark tone merit a caution for children.

Watch BEYOND THE FARTHEST STAR: