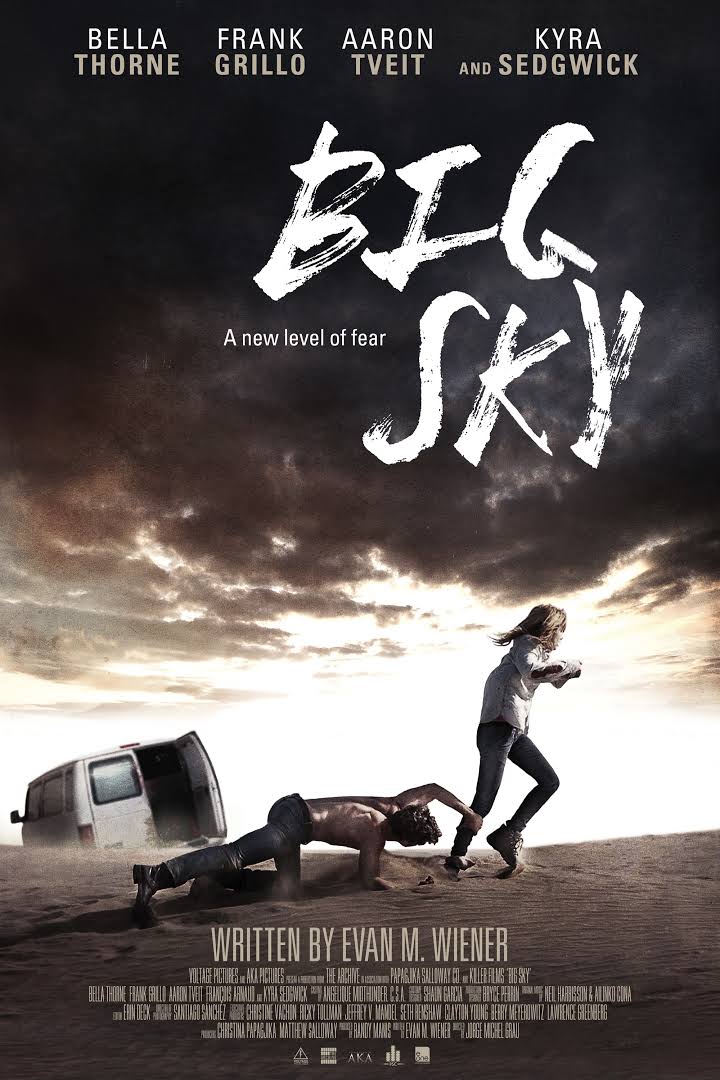 In BIG SKY, an 18-year-old agoraphobic teenager, Hazel, and her mother travel with a van full of occupants to a treatment center. Without warning, the van’s front tires are blown out, and everything comes to a screeching halt. Hazel is hidden in the back, but two gunmen shoot everyone else and kidnap one of the other patients to hold her for ransom. Hazel finds her mother alive despite being severely injured by a gunshot. Hazel must now face her fears about the world and trek five miles alone across the rugged desert to find help before her mother dies.

From the start, BIG SKY is ambiguous about its story and the characters. No exposition or character development is attempted. Another problem is the slow pace. Long stretches pass with hardly anything happening. The dialogue sometimes rambles, getting off track from the action. Violence is the main issue with BIG SKY. It’s very graphic, with people being brutally shot multiple times with machine guns. BIG SKY ALSO contains some strong foul language and innuendo. So, despite a light moral worldview, BIG SKY is excessive.

(B, PaPa, Ho, LLL, VVV, S, N, DD, MM) Light moral worldview where violent acts and murder are punished, and strangers help a girl recover from injury and see that she gets back to her mother safely, but many characters don’t live by moral standards, and man homosexually mocks another man by saying he looks like he wants to be “bent over”; 26 profanities and obscenities, slang term for human excrement used, girl shown vomiting; man shown dead on the desert ground with a pool of blood next to him, a bloody hand reaches around a door, gunmen with machine guns ambush a van and shoot most of the occupants, people are shot multiple times and bloody wounds are shown, blood splatters everywhere due to gunshots, a woman struggles to stay alive after being shot, man describes his mother hitting his head with a rake when he was a boy, a girl tumbles down a small cliff and injures herself with a bloody wound, a man sprays mace in his own face, a standoff happens at gunpoint, and multiple people are shot; girl says she heard a “man moan” during the night, implied unmarried couple sleeping together, a man hits on a woman and suggests they might fool around, a woman jokingly tells a corpse on top of her multiple times that he “feels good”; a man has his shirt off in the desert revealing multiple tattoos; no alcohol; a man carries a hypodermic needle for injecting illegal drugs, man talks about a friend taking LSD, man offers to get drugs for a girl if she wants; and, a girl is kidnapped and held for ransom, a girl steals a man’s watch but gives it back to him, a girl’s parents are divorced.

In BIG SKY, an agoraphobic teenager and her mother are on their way to a treatment center in the middle of a desert with other patients when their van is ambushed by two gunmen, who threaten their lives. BIG SKY has a light moral worldview where murder is punished, but it’s very slow moving and contains some extreme violent content, lots of strong foul language and other immoral behavior, so extreme caution is advised.

As the movie opens, 18-year-old Hazel has been living in her room for months due to a severe case of agoraphobia. With her parents divorced and her mother frequently seeing different men, she has no real structure at home. Her father has stopped child support, making things even more difficult financially. There seems to be no other alternative than to check into a treatment center so that she can move past her mental illness and build a life for herself. Although her mother hates to see Hazel go, she wants what’s best.

The next morning, a man from the sanitarium comes to pick up Hazel and her mother decides to ride with her to help calm her fears. Along the way, they must stop to pick up other patients, so Hazel rides in a box in the back of the van, separated from everyone else. Along for the ride is an overly stressed businessman, an anorexic and a kleptomaniac, who’s also the daughter of an extremely wealthy man.

Without warning, the van’s front tires are blown out and everything comes to a screeching halt. Two masked men threaten everyone with semi-automatic machine guns, but things quickly get out of hand, and nearly all passengers in the van are shot dead. The kleptomaniac is kidnapped, and the men drive away.

Hazel, still hidden in her box, was shielded from the violence and finds her mother miraculously still alive after being shot. There are no supplies, and their phones were taken by the gunmen as well. With no other option available to them, Hazel must face her fears of the outside world and trek five miles across the rugged desert to find help before her mother dies. Can she survive the journey and save her mother’s life?

From the get go, BIG SKY decides to remain ambiguous about the story and the characters. Only little hints are dropped during each scene about what’s happening or who the characters are. No exposition or character development is attempted. The other problem is the slow pace. Scenes drag out far longer than necessary, and there are completely unnecessary scenes altogether. Long stretches pass without anything of consequence happening.

Another major weakness is the subplot of the gunmen. Only a very brief explanation of their motives is tucked away into a line of dialogue. The other dialogue during the movie is rambling at times, getting off track from the action in the scene. When Hazel’s mother is dying and in dire need of emergency medical treatment, they decide to have a nonchalant chat about maps.

Violence is the main issue with this movie. It is very graphic, showing people being brutally shot multiple times with machine guns. Blood splatters everywhere, and many bloody wounds are shown. Although the gunmen are upset because they hadn’t planned on shooting anyone, they aren’t remorseful in the least for their act of murder. They also kidnap a girl and hope to hold her for ransom.

Language is a concern as well with 26 profanities and obscenities. At least half of them are the “f” word. In addition, several scenes contains some sexual innuendo. So, despite a light moral worldview where murder is punished, BIG SKY is excessive.