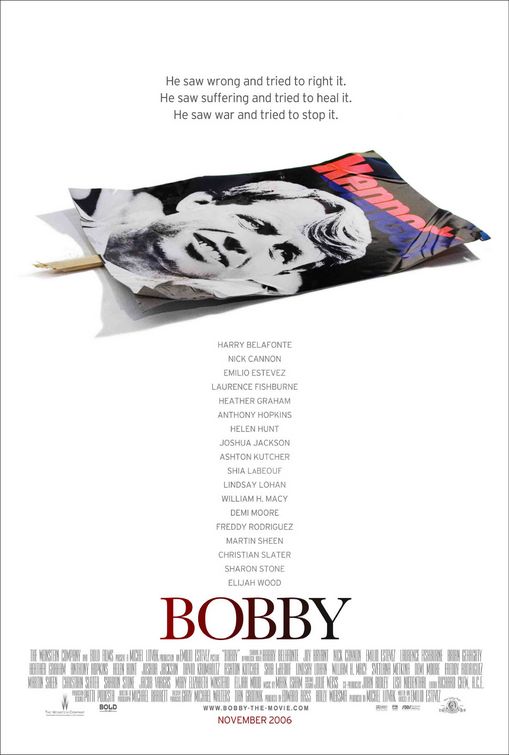 BOBBY is a fictional presentation extolling the last major public statements of Robert F. Kennedy. It is set in the context of Kennedy's campaign for President in 1968 and the day of his assassination in June of that year, at the Ambassador Hotel in Los Angeles. Rather than focus on Kennedy and his campaign staff, the movie also zeroes in on a multitude of fictional characters. They include an alcoholic singer, her husband, the hotel manager, the manager's wife who works in the beauty salon, the manager's mistress, the manager's white racist assistant, a black female hotel phone operator, two Latino busboys, a business executive and his artistic wife, and a retired hotel doorman (played by Anthony Hopkins).

There are just far too many characters in this movie. This makes for boring viewing at first, but the movie picks up in the second half. The ending is inspiring and contains some positive Christian references. But, real speeches from Bobby Kennedy in the movie contain only vague platitudes. BOBBY preaches a strong Romantic, liberal worldview with strong politically correct attitudes. It also has too much foul language and makes light of drug use.

(RoRo, H, FR, PCPC, Co, FR, Ab, C, B, LLL, VV, S, N, AA, DDD, M) Strong Romantic, liberal, utopian (in a secular humanist way) worldview idolizing Robert F. Kennedy and his vague liberal platitudes about ending hatred and violence, bringing Americans together and teaching that all human beings are, at bottom, good rather than sinful as the Bible actually teaches, with some strong politically correct, Cultural Marxist (or Neo-Marxist) content from the 1960s lauding liberal multiculturalism and racial identity politics, including pro-Latino attitude that borders on a kind of racism and argues obliquely in favor of the invasion of illegal immigrants into the United States and their ultimate takeover of the American Southwest, plus minor character argues that taking LSD brings people closer to God (a false, anti-biblical teaching that's treated in a comical fashion), mitigated by some solid positive Christian and positive moral content and references, including character makes the Sign of the Cross, character places a rosary with a crucifix into Bobby Kennedy's hand as he lies shot on the floor, a reference to the phrase "The Once and Future King" that makes Bobby Kennedy and young Latinos into Christ figures who will one day return to America to rule and vague comments about compassion, love and peace; at least 32 obscenities (including some "f" words, three strong profanities, two light profanities, and stoned young man goes to the bathroom in a litter box; strong violence includes the assassination of Bobby Kennedy with people lying bleeding from gunshot wounds and the struggle to stop Sirhan Sirhan and take his gun away, plus man punches another man and newsreel images of war violence from the Vietnam War; implied adultery with partially nude couple in bedroom and some brief crude sexual comments; brief upper and rear male nudity, and semi-nude woman with back to camera, but nothing really salacious; alcohol use and drunkenness; smoking tobacco and movie makes light of marijuana use and LSD use (including selling drugs), but there are some slightly negative connotations to this drug content but not enough to keep children and adults away from experimenting with such drugs; and, lying and politician uses poverty and misery in America to make political points.

BOBBY is a utopian, liberal presentation extolling some of the last thoughts of Robert F. Kennedy. It is set in the context of Kennedy’s campaign for President in 1968 and the day of his assassination on June 4 of that year. The assassination ended Kennedy’s life on June 6. The movie also has some references to the assassination of Martin Luther King, Jr., the Civil Rights leader, earlier that year. It even has a reference to the attempted assassination of art icon Andy Warhol, the day before Kennedy was shot.

The movie focuses on the day of the assassination at the Ambassador Hotel in Los Angeles. California Primary voters are deciding between Kennedy and another liberal candidate, Eugene McCarthy, who forced President Lyndon B. Johnson out of the Presidential race earlier in 1968. Of course, the charismatic Kennedy, ever the opportunist, saw his chance and joined the race after McCarthy had laid the political groundwork for challenging Johnson.

There are just far too many characters in this movie. Thus, the first half of BOBBY is a bit dull, and the movie doesn’t pick up until everyone starts to gather to hear the primary results, and Kennedy is about to make his appearance in the hotel. That said, despite the tragedy that occurs, the movie ultimately inspires the viewer as the crowd of characters comes together to mourn the mortally wounded Kennedy and give comfort to one another. Meanwhile, over the soundtrack viewers hear Kennedy giving his famous speech against violence and hatred the day after Martin Luther King’s assassination.

Although the ending is inspiring and contains some positive Christian references, the words of Kennedy are, in the final analysis, empty political platitudes about love and compassion. The filmmakers are obviously trying to fight the political and social cynicism of America today by citing Kennedy’s emotional delivery. Kennedy’s words as portrayed here, however, are ultimately empty, for four reasons.

First, they are utopian and, hence, unworkable. Second, they reflect a false Romantic worldview which teaches that human beings are inherently good instead of inherently evil and sinful as the Bible, the Word of God, teaches, and as the facts of history and psychological studies of human beings clearly show. Third, though they are emotionally compelling, they offer no solutions as to how Kennedy proposes to accomplish his plea for compassion, love and peace. Fourth, Kennedy’s words at the end don’t focus on Jesus Christ, who is the only person who can truly bring compassion, love and peace into our hearts through His vicarious atonement and triumphant resurrection.

BOBBY also contains plenty of foul language, including some “f” words, and some references to sexual immorality. The movie doesn’t rebuke this profane content strongly enough. And, it makes light of three characters use of illegal drugs, including marijuana and LSD. Finally, despite some positive Christian and moral elements, the movie includes lots of politically correct content. For example, it supports illegal immigration, reverse racism, multiculturalism, and the radical Marxist politics of the street demonstrators in the 1960s. Thus, the movie’s Romantic worldview gives far too much support to the Marxist cultural theories at the time which have destroyed the moral integrity of the Civil Rights Movement and liberalism.

All in all, therefore, MOVIEGUIDE® believes BOBBY will lead many people astray, morally, politically and theologically. Please don’t let your family, friends, children, church, or country be fooled by this movie’s false Romantic, Neo-Marxist liberal ideology and emotional compelling, but ultimately empty and hence shallow, rhetoric.