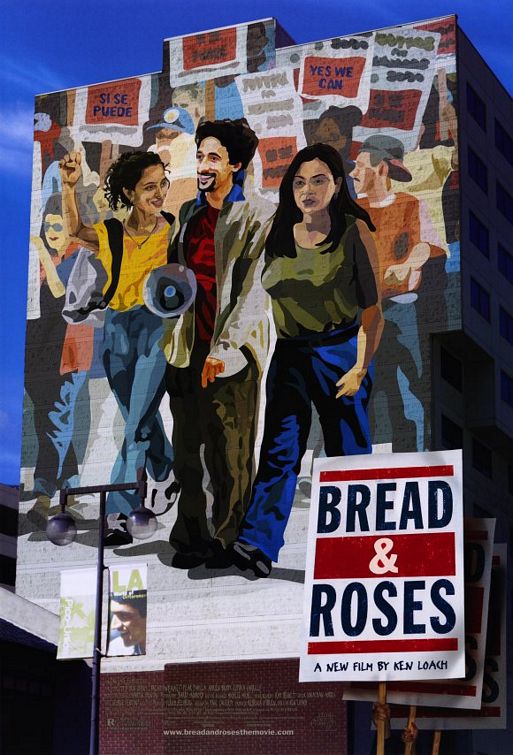 BREAD AND ROSES is the story of the plight of illegal Latino workers in Los Angeles and a union organizer’s attempt to give them a better life. The movie opens with a young illegal immigrant, Maya, escaping from one of the men who helped her get into the United States, only to rape her. Maya to finally gets to her sister, Rosa, who gets her a job cleaning offices. On her first day on the job, she rescues a union organizer, Sam, from the building’s security guards. A romance develops, and Maya starts to help Sam organize the workers. Maya robs a gas station, however, to help another illegal alien, and gets into numerous fights with her sister.

Ken Loach, whose dedication to the lost cause of Communism knows no limits, has combined the worst elements of bleeding heart Trotskyite Communism with the worst elements of Leninism. It is highly doubtful that this is going to be a popular movie, but just as violent movies too often beget violence, confused young idealists may see this as a call to the barricades. They need to be shown the internal contradictions in the logic of BREAD AND ROSES.

Communism had been around for 30 years when Karl Marx gave it an ideological framework. Lenin took Marx’s grandiose and inhuman ideas and gave them political structure. While doing so, Lenin defined bleeding heart communism as abhorrent to real communism. In his book LEFT WING COMMUNISM IS AN INFANTILE SYNDROME, what Lenin failed to note, and the Austrian school of economics pointed out, is that right-wing Communism, or Leninism, is an adolescent syndrome based on the politics of envy, as executed by the party as the ultimate gang.

Ken Loach, whose dedication to the lost cause of Communism knows no limits, has combined the worst elements of bleeding heart Trotskyite Communism with the worst elements of Leninism. Loach, who has made a career with this type of propaganda, ventures forth from his native England, where the government is suffering from the drastic consequences of listening to this muddled thinking, to the United States to make BREAD AND ROSES, the story of the plight of illegal Latino workers in Los Angeles and a union organizer’s attempt to give them a better life.

The movie opens with some unscrupulous coyotes leading their Mexican immigrants across the border. When they get to LA, they take exorbitant amounts of money from the relatives of their prey but refuse to give up a young woman named Maya. Instead, they flip a coin to see who’s going to rape her. Maya, however, is too smart for the winner of the coin toss. She tells him that he needs to take a shower. Disrobed, she starts to wash his back. Behind his back, she takes his clothes so that she can leave him there, stranded in the buff.

Maya finally gets to her sister, Rosa, and begs Rosa to get her a job cleaning offices. Her first day on the job, she finds the supervisor, Perez, along with the building security guards, chasing a union organizer named Sam around the offices. She rescues Sam by putting him in the garbage can. From there, a romance starts. She starts to help Sam organize the workers. A poignant moment comes when the workers are watching news footage from a famous 1990 incident in Century City, one of the many small cities near downtown L.A., where hundreds of union workers were ruthlessly beaten by police.

When the cleaning contractor fires all the employees, Maya robs a gas station so that she can give the money to one particular immigrant so he can go to law school. Her sister gives the supervisor, Perez, the names of the trouble makers. When Maya confronts her, they have a powerful screaming match, where Rosa tells how she prostituted herself for several years to send money back to feed Maya and the rest of the family. In the process of this confrontation, the illicit details of the skin trade are presented.

By the end of the movie, the company relents and allows the workers to unionize. Maya is sent back to Mexico, in lieu of being sent to prison for grand theft.

Ken Loach is known for letting his actors improvise their lines. In some of the scenes, this works brilliantly, as in the many scenes showing the friction between Maya and Rosa. In other scenes, it seems like amateur night at the movies. This lack of self-discipline in taking the time to develop a workable script produces the major defects in the ideological confusion in the movie. In the Marxist tradition, prostitution is seen as equivalent to marriage and theft is justified. In the Leninist tradition, anything is permissible to overthrow the system. In the Trotskyite tradition, there’s an idealistic sympathy for the illegal immigrants. This confounding of several different doctrines, combined with the improvised dialogue, diminishes instead of enhances the entertainment and propaganda value of this movie. Of course, all of the supervisors and “corporate bosses” are stereotypical, evil capitalists.

On one hand, there’s a lot to be said for fair wages as well as other benefits the immigrants want. On the other hand, BREAD AND ROSES ignores the fact that they want the benefits of America without citizenship and without responsibilities. Listing all of the double standards that are presented would take up the entire MOVIEGUIDE® magazine. It is highly doubtful that this is going to be a popular movie, but just as violent movies often beget violence, confused young idealists may see this as a call to the barricades. They need to be shown the internal contradictions in the logic of the movie, but after all, this is the defect in most propaganda.