CHEAPER BY THE DOZEN 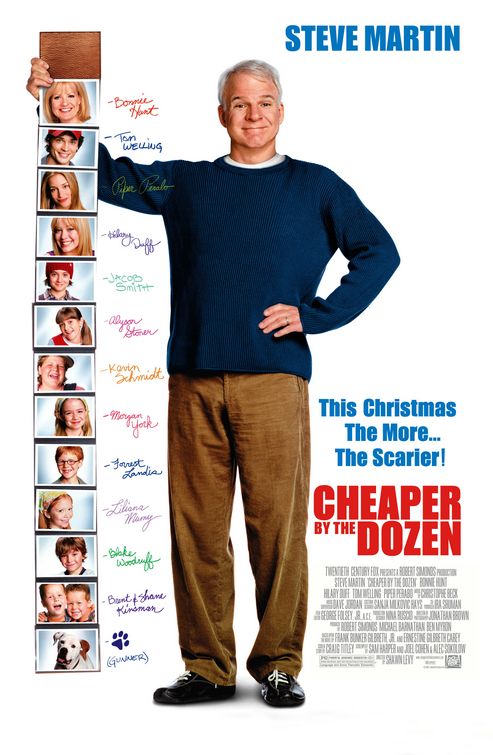 The very funny CHEAPER BY THE DOZEN stars Steve Martin and Bonnie Hunt as parents of 12 children who must confront their priorities when their careers get in the way. CHEAPER BY THE DOZEN is highly entertaining. Although it is not the beloved original novel, it makes a tremendous number of positive, redemptive, and moral points including affirming the resurrection of Jesus Christ in the midst of messy situations.

The very funny CHEAPER BY THE DOZEN begins with Kate Baker (Bonnie Hunt), writing her novel CHEAPER BY THE DOZEN. She explains how she had 12 children over 23 years. Although their lives are in constant flux and pretty messy, they all love each other. They live in a small town where the father, Tom (Steve Martin), is the winning high school coach. Life changes when Tom gets an offer to coach his college team in Chicago. The children do not want to move, but Kate supports him. Soon after they move, Kate has to head to New York for her publisher. She has never left her family before this. Of course, once she leaves, pandemonium breaks out in the household.

Although CHEAPER BY THE DOZEN is not the classic novel, it is a wonderful movie which makes a positive, redemptive, and moral points including affirming the resurrection of Jesus Christ in the midst of messy situations. Forgiveness, love, family, decency, and morality triumph in a big way. The director keeps all the balls in the air, which makes the movie the most enjoyable feature film that’s been released so far this Christmas season.

Rent or Buy CHEAPER BY THE DOZEN: