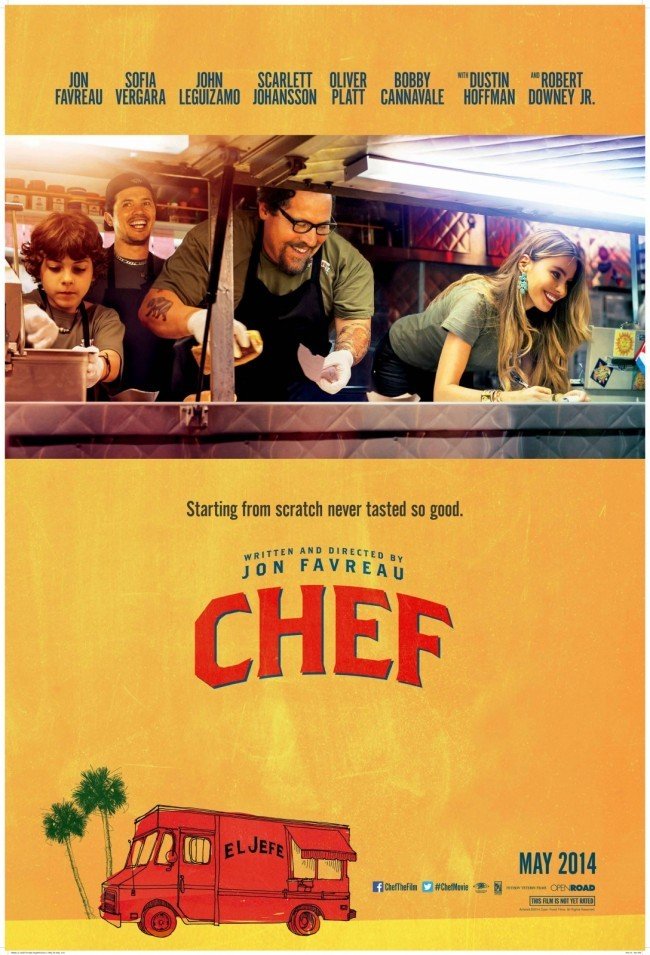 CHEF is a fun, uplifting movie with positive themes, but it has some strong negative content, especially lots of foul language. Carl Casper was once celebrated as a unique chef, but now he’s stuck cooking someone else’s menu. When a food critic gives Carl a terrible review, Carl says harsh things to the critic via Twitter that sends his career down the drain. With no job and few options, Carl decides to start a food truck serving Cuban sandwiches. Starting in Miami, Carl drives the food truck from Miami to Los Angeles. He brings his 11-year-old son with him and teaches him about hard work and being passionate about the things you love in life.

CHEF isn’t a perfect movie, but the dialogue is witty and the characters are enjoyable. Best of all, CHEF has a very family oriented theme revolving around a man reconnecting with his son and his ex-wife in a beautiful, even inspiring, way. Sadly, these positive themes are undercut by many strong obscenities and a few crude references. Because of this, Movieguide® advises extreme caution for CHEF.

(BB, CapCap, LLL, S, N, A, D, M) Strong moral worldview extolling fatherhood, marriage, hard work, and entrepreneurship; at least 100 obscenities (most “F” and “S” words), one use of “JC,” one light profanity, and some crude references; no violence; light sexual, crude content includes Carl and a female hostess nearly kiss, but instead, he just cooks for her, they sing the song “Sexual Healing,” and a crude scene where two men and a young boy put corn starch down their pants due to the humidity; upper male nudity plus women wear some cleavage bearing dresses, and some bikini clad women on the streets of Miami; some drinking; some smoking of cigarettes (possibly weed, though not clear); and, a boy talks back to his father in a disrespectful way and man goes on an angry tirade.

CHEF is a fun, uplifting movie with positive themes, but it’s negated by some strong, negative content, especially lots of foul language.

Carl Casper (Jon Favreau) was once celebrated as a unique chef, but now, he’s stuck cooking someone else’s menu at a trendy restaurant called Gauloises, owned by Riva (Dustin Hoffman). Carl deeply cares about his 11-year-old son Percy, but his focus on work keeps him from really bonding with him, so Percy spends most of his time with Carl’s ex-wife, Inez.

With an astute food critic visiting, Carl plans a unique and creative meal just for him, but Riva wants Carl to serve the regular menu for which the restaurant is known. Carl unhappily agrees and serves Riva’s food to the best of his ability. When the review of Carls food appears, it’s anything but pretty, and Carl is devastated.

To make things worse, Carl learns how to use Twitter with the help of Percy and sends out harsh tweets publicly that Carl thought were private. It doesn’t take long before Carl’s public beef (pun intended) with the food critic goes viral, with angry video tirades and heated Twitter exchanges. Carl’s career meltdown becomes an Internet sensation.

With Carl’s professional career looking like it’s over, Inez convinces Carl to join her and Percy on a trip to Florida to find creative inspiration and reconnect with his son. Creativity does indeed spark as he visits his Cuban roots and, with some prodding, Carl decides to open up a food truck serving the comfort food of his Cuban childhood.

Carl, his longtime grill chef, and Percy take the truck across the country back to Los Angeles, stopping by cities on the way to serve their food. With the help of Percy’s social media savvy, every city they stop in is a huge hit. Along the way, Percy learns what it looks like to work hard at your passion, and Carl realizes the importance of spending time with his son.

CHEF has slow moments and could have been shorter. A lot of the character interactions do a lot to develop the main character. Also, the buildup leads to a satisfying resolution. However, the story seemingly skips over the climax. Thankfully, the characters play off each other well and keep things interesting, but additional conflict would’ve helped. Jon Favreau does an exceptional job as the star, writer and director of CHEF. Here, he’s clearly trying to tell a more personal story in comparison to his previous superhero epics IRON MAN 1 and 2. Whether it’s fine cuisine or grilled cheese sandwiches, everything is mouth watering in CHEF.

Best of all, CHEF has a very family oriented theme revolving around a man reconnecting with his son. Carl passes down his passion for food and teaches his son what it means to work hard and the importance of doing things to the best of your ability. (SPOILERS FOLLOW) Additionally, Carl learns how he failed not just as a father, but as a husband. Beautifully, the movie ends with Carl remarrying his ex-wife and recommitting to his family who’s come along side to work with him at his business, as a family.

Sadly, however, all these themes are undercut by heavy amount of strong foul language and a few crude references. It’s a terrible shame, because what could have been a great family movie is now inappropriate and offensive for many viewers. So, Movieguide® advises extreme caution for CHEF.