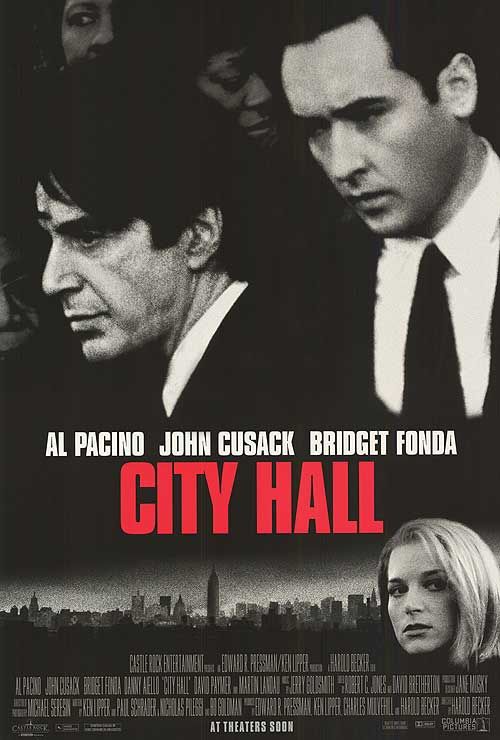 CITY HALL is a tense and intelligent political thriller that examines duty, conscience and political gain in modern New York City. Starring the always excellent Al Pacino and a surprisingly good turn by John Cusack, this detective drama is stimulating and smart. Caution should be noted in its brief depiction of murder and its hardball, hard language dialogue.

In CITY HALL, New York City Mayor John Pappas, played by Al Pacino, and his southern-fried Deputy Mayor Kevin Calhoun, played by John Cusack, have an apparently strong lock on the public’s affection. Together, they handle all adversity with tact. One morning, a cop and a drug dealer shoot-out, and a stray bullet kills a six year old black child. That begins the unravelling of the Mayor’s reign. The child was killed by a bullet from Tino Zapatti. Tino’s father Paul is a Mafia cheiftain. Abe Goodman is the Mayor’s able Chief of staff. He sees the court file for Tino Zapatti and notices that he was let off on probation for a crime that should have put him in jail for 10 to 20 years. Goodman smells a fix, which may implicate presiding judge Walter Stern. Kevin Calhoun and police benevolent attorney Marybeth Cogan do gumshoe work which uncovers the repercussions of the murders. The result is more murders and shocking evidence which includes the Mayor himself.

CITY HALL is excellent and professional in every way. The acting is superb. CITY HALL has a tight script with a thought-provoking, rather than climatic ending. It should be rightly noted as a movie only for adults. It is brainy and intelligent but contains a little violence and some hardball, hard language. It is a good testament to the power of goodness over corruption.