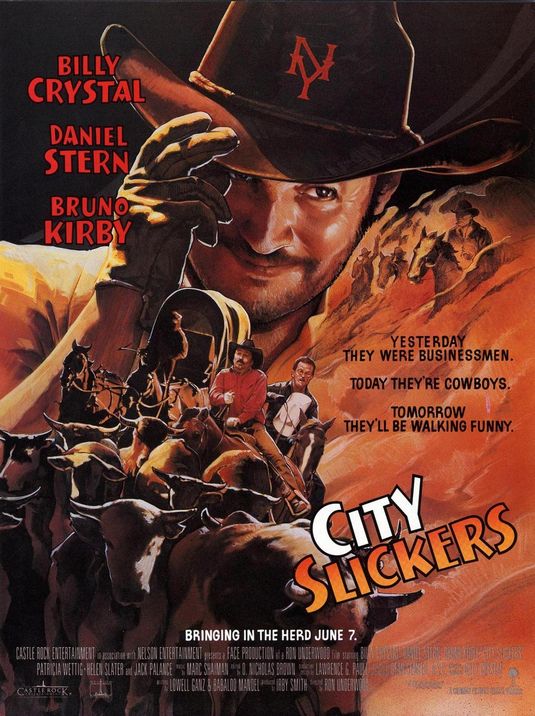 Fairly funny comedy about three New Yorkers who go on a cattle drive as an antidote to mid-life crisis, and learn about life, love and really smelly animals. Contains humanistic message about the secret of life being whatever is most important to you.

As an antidote to mid-life crisis, three New Yorkers go on a cattle drive from New Mexico to Colorado in CITY SLICKERS, and learn about life, love and really smelly animals.

Mitch Robbins sells air time for a radio station but, turning 39, feels depressed and thinks “this is the best it’s ever gonna get, and it ain’t that good.” His two friends, Ed, a seller of sportswear, and Phil, a grocery store supervisor whose adultery with a checkout girl has just been exposed, ask Mitch to join them on a two-week cattle drive vacation package.

Mitch’s wife gives the OK for him to “go find his smile.” Some other city folk join the trio of would-be cowboys, and, with a “yeeha,” set out on the trail to drive a herd of cattle from New Mexico to Colorado. Trail boss Curly (played to the prickly-pear hilt by Jack Palance) presides over these vacationers as a tough, no-nonsense real cowboy who disdains city slickers.

Much of what you’ve seen in serious westerns turns up as fair game for satire in CITY SLICKERS: the stampede, the duel and the art of lassoing to name a few. There are also those things you haven’t seen on the trail, like mobile car phones and discussions about VCRs. (Definitely not for the squeamish is a live-calf delivery).

Unlike BLAZING SADDLES (which was the ultimate western spoof filled with inside jokes, toilet humor, several puns, and enough laughs to cover over the fact that it was, essentially, an inane movie), the satire in CITY SLICKERS gives way to situations about male bonding, as well as philosophical musings over the best and worst day of life.

However, the message the picture mainly wants to communicate seems to reside with Curly, namely, what is the secret of life? Mitch gleans the answer by film’s end. Unfortunately humanistic, it turns out to be whatever is most important to you, and something each one of us must find for himself. For Mitch, it is his family.

It is not surprising that one who does not know Jesus would come to such a conclusion. For those who do, the secret of life is found in Him, and the best day of life is that day when we “crossed over from death to life” (John 5:24). The film rebukes the idea of adultery, even if you can get away with it, but overall cannot be recommended, due to over 70 instances of obscenity or profanity, humanism and its tilt toward sexually lewd joking.