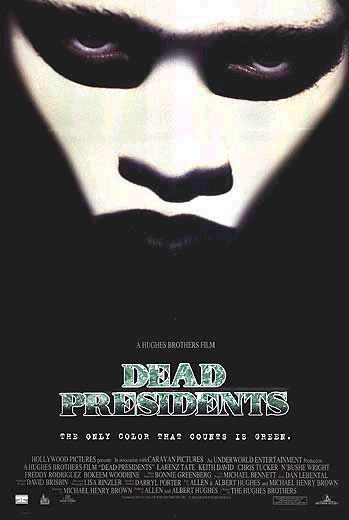 The film DEAD PRESIDENTS describes the changes that happen in the life of Anthony Curtis when he leaves his Bronx home for the Vietnam war. He returns to find his neighborhood changed and unsympathetic to the brutal years spent fighting for his country. While the action sequences are skillfully handled, the film is blatantly violent and gory, with over 300 obscenities, 20 profanities and a string of vices from small-time betting to a major heist of US currency.

DEAD PRESIDENTS features an explosive confrontation between robbers and the law in a major planned heist of old US currency. It also tracks the life of 18-year-old Anthony Curtis. He decides to forego college, join the Marine Corps, leave his family and girlfriend behind, and fight the war in Vietnam. After the war, Anthony returns to his Bronx neighborhood, only to discover that sympathy is hard to find, as well as jobs. His girlfriend has been raising his daughter and with another baby on the way, she is not living her dream. Anthony resorts to the one big chance of making it by robbing an armored truck carrying old US currency destined for burning.

DEAD PRESIDENTS succeeds in its action sequences. The excitement and pacing are well handled and skillfully placed, but Anthony’s character development was compromised along the way. The talent of the Hughes brothers are very evident. While DEAD PRESIDENTS may not prove to be their best work, it is paving the way for other efforts. Regrettably, the movie revels in its own violence. There are lots of blood, gory mutilations, a severed head carried around, people bashing, and gunfire. Also, the film is marked by over 300 obscenities and 20 profanities. The film does ultimately punish crime, but the lack of moral or religious conscience rings clear in DEAD PRESIDENTS.