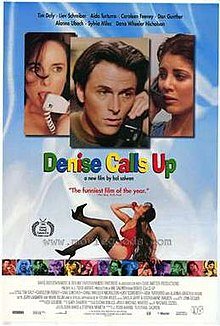 DENISE CALLS UP explores the modern phenomenon where people can develop a relationship without seeing each other through the use of the telephone and computers. The film raises many questions about intimacy, and although it is comical at first, it eventually presents a desperate view of life -- earmarked by loneliness. Including some phone sex, it is a desperate commentary on the role of technology in today's social world.

(Pa, L, SSS, M) Pagan worldview; 1 obscenity, 2 exclamations & 2 vulgarities; two scenes involving sexual innuendoes in which two people have a sexual experience over the phone, never actually meeting each other in person; and, some discussion of sperm donation

DENISE CALLS UP is a genuinely original concept wherein a cast of eight people interact with each other almost exclusively over the phone. The majority of the movie involves one person on screen at a time either on the phone, or working on a laptop, or both. It is a portrait of the struggle of each of these single 30-somethings to establish normalcy in their lives. From the outset it seems that everyone is trying to set up someone with a date, but nobody ends up meeting anyone else. The most bizarre twist of the story line shows the complete dysfunction of these characters. This occurs when Gale, while talking on her car phone to Linda, is killed in an accident. Suddenly, the film’s comic demeanor takes a sharp turn.

The movie raises many questions about intimacy and belonging, but it offers few answers. There is one attempt for all of the characters to actually meet, but they never do. The movie states that technology can be a shield that we can hide behind when fears of reality arise. It is legitimate to understand the role of the telephone and technology in today’s society, but this point of technology as alienating could have been more powerful in a short film. Here, it just drags. DENISE CALLS UP will make you want to reach out and touch someone — literally