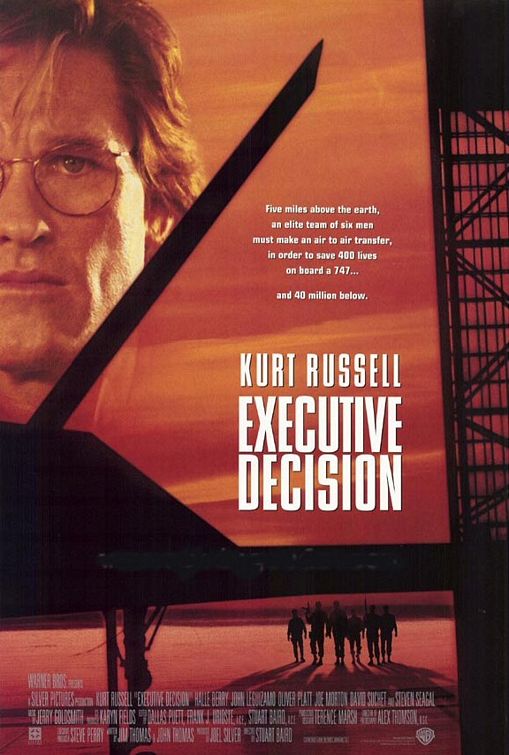 When a 747 carrying highly poisonous nerve gas is hijacked by Islamic terrorists, an EXECUTIVE DECISION needs to be made. Kurt Russell stars in this mile-high thriller as he attempts to stop the terrorists before they cross into US air space. Containing violence and mayhem, it is a thrill ride mixed with violence for adults.

In EXECUTIVE DECISION, Lt. Col. Austen Travis, is the crack leader of an anti-terrorist unit who are commanded to recover a deadly toxic nerve gas called DZ5. Travis and his team go into the Middle East to recover the gas, but find it missing. Angered, they believe their intelligence report, issued by David Grant, played by Kurt Russell, was incorrect. The DZ5 is actually being loaded onto an American 747 by Islamic villian, Nagi Hassan, who threatens to hold hostages on the plane until a fellow Islamic leader is freed. Secretly, Hassan plans to fly the plane into Washington and nerve gas all of the eastern United States. Our heroes race against the clock to disarm the bomb before the president decides to blow up the plane before it gets to U.S. air space.

This action packed movie has the suspense of a PREDATOR and the action of a DIE HARD. Kurt Russell delivers an impressive performance. This film is completely Hollywood from its inception to its conclusion. Many will find the plot quite a stretch. The villain is eccentric, heartfelt believer in Islam. There are no positive portrayals of Islamic people. They are all terrorists. Overall, the film will disappoint a few, shock many, entertain some, mesmerize others, and make some laugh.