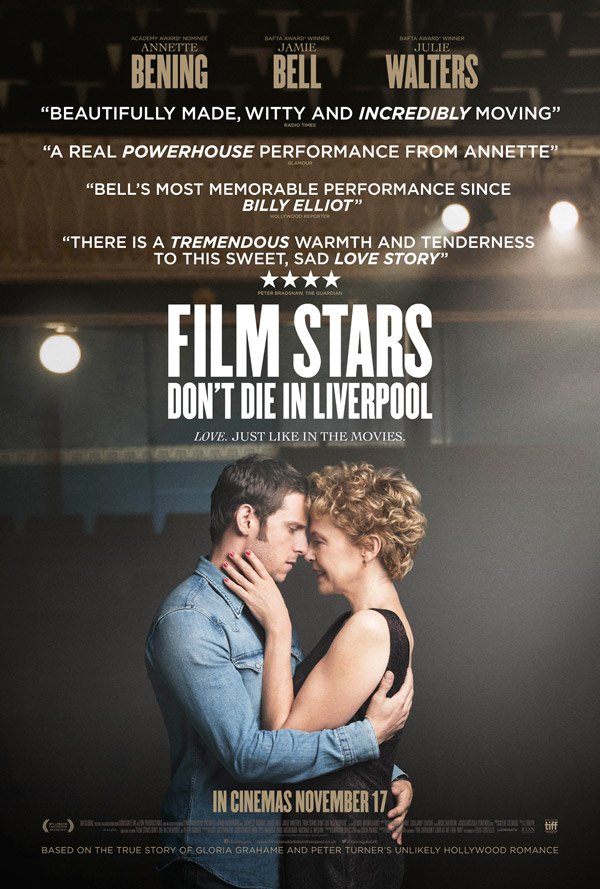 FILM STARS DON’T DIE IN LIVERPOOL tells the biographical story, from the memoir of Peter Turner, of the passionate affair between himself and famed 1950s Hollywood starlet, Gloria Grahame, of OKLAHOMA! and several other movie classics. Beginning with a phone call concerning news about Gloria’s health, Peter remembers the time they spent together, starting in 1978. Gloria was 29 years older than Peter, but something clicked between them. Told with cleverly intertwined flashbacks, FILM STARS shows the last years of Gloria’s life with the young stage actor in Peter’s home town, Liverpool.

FILM STARS DON’T DIE IN LIVERPOOL is told with authenticity and some poignancy. However, it’s dominated by a Romantic worldview and exhibits an excessive mixture of questionable content. First, it centers on a May-December affair between two unmarried people who had no intention of ever being married. The movie also contains plenty of foul language, explicit nudity, bedroom scenes, brief homosexual references, and other objectionable content. Gloria and Peter justify their unconventional relationship just because they’re in love. MOVIEGUIDE® suggests moviegoers stay away from FILM STARS DON’T DIE IN LIVERPOOL.

Dominant Worldview and Other Worldview Content/Elements:
Very strong Romantic worldview as moral conviction or even social standards of morality are practically ignored in order to pursue love, romance and the characters’ hearts, the entire synopsis centers around the love affair of an unlikely couple, a woman who is older enough to be her lover’s mother, with some homosexual content as both main characters admit to have had enjoyed same sex relationships as well as heterosexual relationships in their past.
Foul Language:
At least 41 obscenities, two strong profanities and two light profanities, plus some vulgar language.
Violence:
Light violence when two brothers get into a scuffle in the kitchen while arguing, but nothing more than a bit of wrestling, with no blood shown.
Sex:
Strong sexual content includes multiple scenes where couple shown in bed kissing while topless and young man kisses older woman’s breasts on one occasion and begins to grope her in bed.
Nudity:
A few examples of upper female nudity include main female character bares her breasts while in bed with her younger lover, multiple views of upper male nudity, and rear upper female nudity.
Alcohol Use:
Main characters drink together quite often, main male character shares a beer with his dad in a pub, man and woman go to a bar to have a drink, and male character goes into a casino where everyone is consuming alcohol and shares a drink with a friend, but no drunkenness.
Smoking and/or Drug Use and Abuse:
Many of the main characters smoke cigarettes, and the main female character is constantly taking prescription medication.
Miscellaneous Immorality:
Very strong miscellaneous immorality includes a few examples of lying and deception as the main female character lies to her lover and everyone else in order to hide the fact that she is sick, multiple examples of family dysfunction as the children and their parents constantly bicker, the main female character and her sister have a spat over the fact that her male lover is only a couple years older than her oldest son, main female character has four children with four different husbands, and many examples of moral relativity as the main characters are portrayed as the ones doing the right thing because they love each other.

FILM STARS DON’T DIE IN LIVERPOOL tells the biographical story of the famed movie star from the 1940s and 50s, Gloria Grahame. Told from the perspective of her young lover, Peter Turner, the story is told flashing back and forth between 1981 and the time Gloria and Peter spent with each other when they were together and in love.

As the movie opens, Peter is living in his hometown of Liverpool, England in 1978, pursuing a career as an on-stage actor when a fascinating woman moves into his apartment building, and suddenly into his life. This woman is Gloria Grahame, the famous Hollywood actress known for movies such as IT’S A WONDERFUL LIFE, THE BIG HEAT and OKLAHOMA!. Seeing Peter in the mail room alone one day, Gloria invites him into her apartment for a drink, if he will help her practice disco dancing. The attraction is instant between the two people, despite their age difference of 29 years. They begin to spend more and more time together, going to the movies and the local pubs. Old enough to be his mother, Gloria begins to feel a bit self-conscience about their age difference, but Peter assures her he’s in love with her, and their love affair begins.

Fast forward three years. Peter is contacted by a hospital close to his home in Liverpool, where he finds out Gloria has been there, is sick and refuses to receive treatment from the doctors. Loved by his entire family, they shelter her and begin to try nursing her back to health. During this time of reunion, Peter begins to remember all the things that happened when they spent their time together years before. Because Gloria refuses to contact her family, or seek treatment, Peter calls the hospital to find out more about her condition. Upon learning the truth, he sets out to make the rest of their time together the best that he possibly can.

FILM STARS DON’T DIE IN LIVERPOOL is a biographical story surrounding the real love affair of these two people. The viewer is captured immediately by the story, told with cleverly intertwined flashbacks, causing the audience to easily empathize with the characters. Annette Bening is practically indistinguishable as an older version of the real Gloria Grahame, and plays her with grace and ease. Although it’s hard to agree morally with Gloria and Peter’s choices, the events are real and told with authenticity and some poignancy.

However, FILM STARS contains a high degree of questionable content throughout the entire movie. Besides the fact that the entire storyline centers around a love affair between two very unlikely, and unmarried, people, the movie includes strong sexual content and explicit nudity. In addition, there’s an excessive amount of foul language, including at least 30 “f” bombs and a couple strong profanities. FILM STARS DON’T DIE IN LIVERPOOL also contains lying, dysfunctional family elements, moral relativism and brief homosexual references. So, while only one or two of these problems might warrant extreme caution, the mixture of them is excessive.