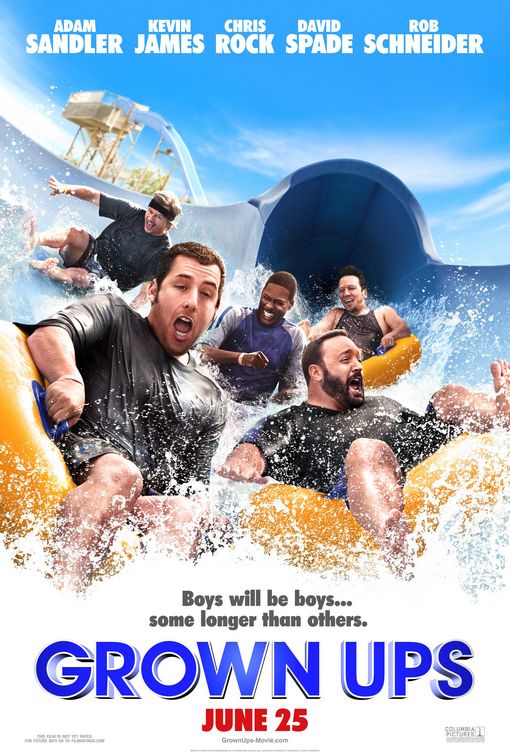 GROWN UPS stars five popular male comics, including Adam Sandler, Chris Rock and Kevin James. They play five childhood friends who reunite at a funeral 30 years after they played together on a middle school basketball team. With their families in tow, they spend an eventful Fourth of July weekend at a lake house. At the lake, they enjoy the outdoors, reminisce about the past and discover things about one another, and themselves, which they never knew existed.

GROWN UPS is full of lowbrow laughs, including lots of slapstick comedy, but it’s enjoyable nonetheless. Some moral, biblical values, such as marital faithfulness, honesty and maintaining parental authority, are affirmed. Also, violent video games are denounced, while playing outside and partaking in traditional games and pastimes are encouraged and shown to be fun and enjoyable for all ages. Some characters hurt themselves by engaging in stupid activities, however. So, parents should tell their children that such behavior is not advisable for them to copy. Brief foul language, several scenes with alcohol and brief rear nudity also warrant caution. Please check out our reviews of other movies, including classic ones, at movieguide.org.

(BB, Pa, C, LL, V, S, N, AA, M) Strong moral worldview overall stresses marital faithfulness, honesty, and parental authority and responsibility, as main characters seek to invigorate their friendships with one another as well as rejuvenate their relationships with their wives and children, the only single character leads a pagan lifestyle that directly opposes that of his married comrades, but his immoral behavior is treated as buffoonery and his antics are not encouraged by the other characters who are hopeful he will one day “grow up,” plus some minor, light Christian content in a Cross displayed in a chapel and one character gives an overly dramatic but serious rendition of “Ave Maria” that causes other characters to laugh; 12 obscenities and no profanities, plus jokes about a grandmother passing gas; some violence and slapstick violence includes violence and bloodshed on video game children are playing but children’s father discourages them and urges them to play Chutes and Ladders instead, arrow pierces one character’s foot, another character swinging from a rope overhanging a lake hits a tree before falling to the ground, and a man moronically zip-lines into a metal building; sexual promiscuity is alluded to as a unmarried character sits on the edge of a bed talking on the phone as a woman sleeps beside him covered by a sheet, one man’s wife is much older and he shamelessly kisses her, unmarried man flirts with married friend’s daughters but makes it clear he is not serious, and some verbal allusions to sex, including some comic ones to one May-December married couple’s sex life; rear male nudity after man (who’s hung over) wakes up and partial rear male and female nudity at a water park, plus some upper male nudity and some skimpily dressed young women are ogled by main characters and, at other times, by their pre-teen sons; light alcohol use and one display of drunkenness; no smoking; and, main character lies consistently throughout movie, but he is confronted about this and genuinely apologizes, and several scenes and comical references of a mother breastfeeding her 4-year-old son, but her breast is covered.

GROWN UPS is a fun, light-hearted, but sometimes off-color, comedy that tells the story of five childhood friends who reunite after 30 years to attend the funeral of their beloved basketball coach, Coach “Buzzer” Ferdinando. The somber occasion quickly turns into a full-blown reunion as the friends and their families pack into a lakeside cabin/former funhouse for the Fourth of July weekend.

Lenny Feder, played by the affable Adam Sandler, is a successful Hollywood agent married to a beautiful fashion designer, Roxanne (played by Salma Hayek). In their Los Angeles mansion, Lenny’s spoiled children play a violent, shoot ’em up video game while texting their nanny to bring them Godiva hot chocolate. It quickly becomes evident that the Feder family needs a breath of fresh air from the great outdoors.

At Coach Buzzer’s funeral, the gregarious gang introduces each other to their families and pick up right where fifth grade left off as they poke fun at one another’s bad hair, weight gain, and even one friend’s (David Spade’s) resemblance to the Olsen Twins. Eric (played by Kevin James) rolls up in a convertible Cadillac with the family dog in the front seat. After fibbing about his profession, he introduces the others to his gorgeous wife (played by Maria Bello) and two young children, one of whom is gluttonous and retaliatory, and the other 4-years-old and still breastfeeding. Kurt (played by Chris Rock) has two kids of his own and one on the way with his no-nonsense wife Deanne (played by Maya Rudolph). Also among his clan is his boisterous, wise-cracking mother-in-law, Mama Ronzoni (Ebony Jo-Ann), whose role in the movie seems to have been written solely for facilitating superfluous flatulence jokes.

Rob (Rob Schneider), a sensitive, serene, maize-loving hippie, introduces everyone to his seventy-something wife, Gloria (Joyce Van Patten). Throughout the movie, their passionate love life is alluded to and subtly demonstrated, starting with an awkward “kiss” in which their tongues seemingly dance with one another without touching.

David Spade’s character Marcus (is the only bachelor in the bunch who, out of all of the men, has the most growing up to do as he tries to set up shots of alcohol for his non-compliant buddies, flirts with Rob’s attractive teenage daughters, and dances with a beer bottle while his married counterparts sway to the music of a soft pop song.

Inside the chapel, a cross is prominently positioned behind the choir loft, and Rob Schneider’s granola character performs an overly dramatic but serious rendition of “Ave Maria” that causes other characters to laugh. No other mention of God, Jesus, church, or the afterlife is made, however.

At the lake house, Lenny laments the fact that his sons and the other children are behind closed doors instead of outside enjoying the grandeur of their surroundings. Literally taking matters into his own hands, he bombards the cabin and returns outside carrying his sons over his shoulders. The other dads follow suit, and some outdoor shenanigans ensue.

Much of GROWN UPS focuses exclusively on the five guys and their humorous commentaries on aging, children and, of course, marriage. These scenes do little to enhance or develop the movie’s already lacking plot, and rather serve as opportunities for the actors to showcase their comedic talent, rooted in years of stand-up performances in nightclubs.

A conflict does occur, however, when a confrontational former basketball opponent, Dickey (played by Colin Quinn), tries to provoke Lenny and his old teammates to a rematch. Lenny resists until the end, when, during the Fourth of July festivities, the two teams reawaken their 30-year-old rivalry.

Despite the frivolous – perhaps forgettable – nature of this movie, with its poorly drawn characters and insubstantial story, it is enjoyable and does contain plenty of heart. Lenny is a man who sees what negative effects privilege and wealth have had on his children, and realizes the benefits of quality family time and discipline. Kurt and his wife are deeply in love, but they learn that the busyness of life shouldn’t get in the way of their intimacy and affection for one another. Eric confesses he was untruthful about his job and is encouraged that what kind of car he drives is no indication of how great a father and husband he is. Rob overcomes his fears of failing in another marriage and acknowledges that every marriage encounters obstacles that are daunting, but not impossible to surmount.

GROWN UPS is a fun movie that ultimately affirms family and highlights the importance of quality time, honesty and sincerity, as well as the value of faithful friends who support and encourage, no matter the circumstance. Some characters hurt themselves by engaging in some stupid activities, however. So, parents should tell their children that such behavior is not advisable for them to copy. Also, some foul language, several sexual innuendoes, brief rear male nudity in two scenes, accidental partial rear female nudity at a water park, some skimpily dressed women, and a scene of drunkenness also warrant caution. Please see the CONTENT section above for more details.