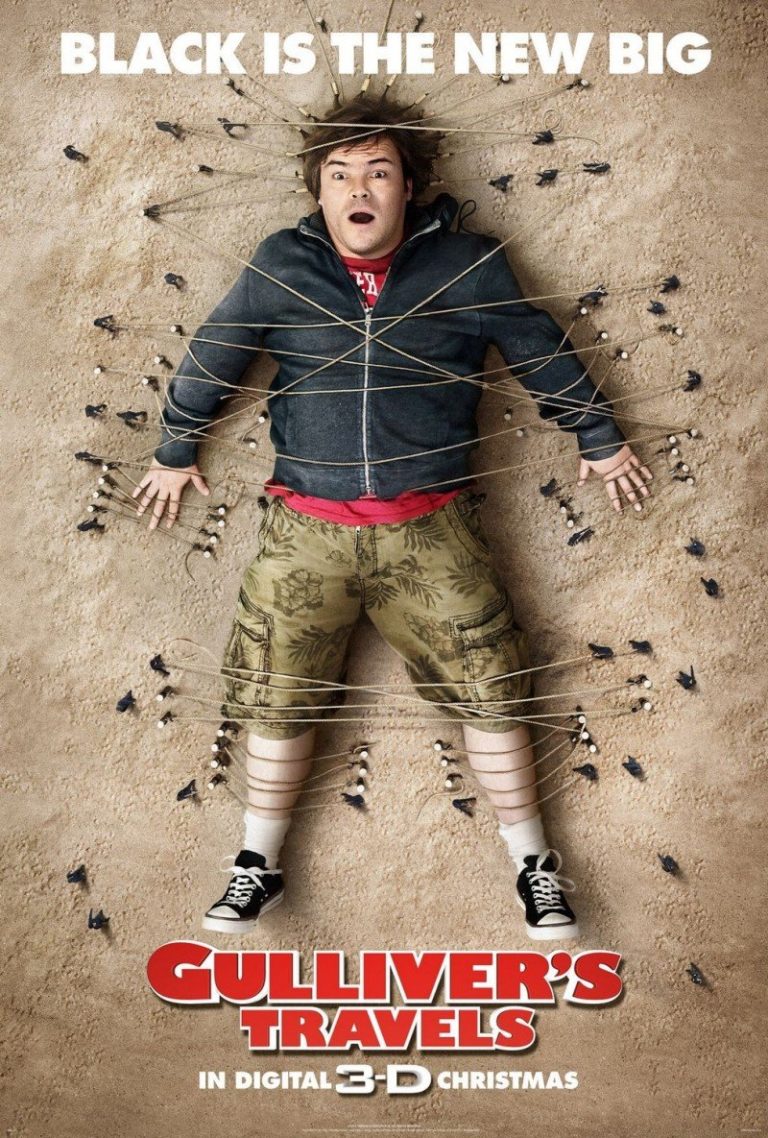 GULLIVER’S TRAVELS stars Jack Black as a goofy mailroom worker for a newspaper. Gulliver has a crush on Darcy, the travel editor, but is too shy. To impress her, he plagiarizes some travel stories, so Darcy sends him to do a story on the Bermuda Triangle. Gulliver gets swept into a different dimension, landing on the island of Lilliput, full of tiny people. He gets involved in a war and saves the king by urinating on the fire burning down the castle. The Lilliputians learn about his lies. Darcy shows up to write the travel story. The king banishes Gulliver, but General Edward defects, captures Darcy and attacks his own people: the Lilliputians.

This version of Jonathan Swift’s GULLIVER’S TRAVELS is a love story. The message is follow your heart. Along the way, there’s lots of scatological humor, including urinating on people, some funny moments and many disconnected vignettes. This is not a PG movie. Despite some positive messages, Jack Black pretends to cuss, painful silly violence occurs, and rear end and fat jokes abound. There is also some sexual innuendo and liberal anti-war sentiment. Media-wise families will not like GULLIVER’S TRAVELS.

(Ro, HH, B, Ho, LL, VV, S, N, A, M) Slightly Romantic worldview with strong humanist elements, one positive statement mixed with a lot of scatological offensive humor where nebbish finally gets the girl, stripping the original story of all Christian value, plus little girl dresses up tiny man as a girl, treating him like a doll; staccato repetition of a word that sounds like the “f” word, three uses of b-u-t-t, six obscenities (including five “a” words to make fun of pompous villain), and four uses of My God, plus groin kick, urinating on the castle, the king and many others, and wedgie with man exposing a little of his rear end; strong, somewhat slapstick violence such as giant man gets shot with cannonballs, kicked, fighting, people get caught in a fire and building falls around them, giant man whipped and treated like a beast, and little people pretend to be characters in a violent video game; some light innuendo and kissing at end, plus and man dresses up as a girl and man points to woman’s breasts; female cleavage; alcohol use; no smoking or drugs; and, lying and plagiarism but somewhat rebuked.

Jonathan Swift was a satirist. He used satire to expose the plight of the Irish at the hands of the English, who had occupied Ireland. Also, he used satire to advance the true Christian faith as opposed to the watered down religion of his day. He was also an Anglican priest who wrote prayers and theological tracts.

Most of this gets lost in this modern retake of Swift’s GULLIVER’S TRAVELS, which becomes a not very well plotted movie showcasing Jack Black’s sometimes funny, sometimes adolescent humor.

Jack plays Gulliver, who’s been in the mailroom at a newspaper for 10 years. He has a big crush on the travel editor, Darcy, played by Amanda Peet, but is too embarrassed to say anything. He fantasizes a lot, plays the air guitar and plays with STAR WARS dolls in his room.

When a new bright young man comes into the mailroom, he tells Gulliver to man up and talk to Darcy. Through a series of funny encounters, he instead asks to be a travel writer, and she asks for a writing sample. He plagiarizes some major travel sites, and she sends him to do a story on the Bermuda Triangle. The Bermuda Triangle turns out to be an inter-dimensional hole that carries Gulliver to the Land of the Lilliputians.

General Edward and his Lilliputian army capture Gulliver, thinking he’s an enemy and a beast. He treats Gulliver like a beast of burden.

In prison, Gulliver befriends the only other prisoner, Horatio, a commoner who had the audacity to look at the Lilliputian princess whom General Edward is courting. When the enemy Blefuscudian army comes to kidnap the princess, Which they do on a regular basis, they set fire to the castle. As in the book, Gulliver extinguishes it by relieving himself on the castle, on the King, the Queen and many others.

Edward wants to throw Gulliver back into prison, but the King sees him as a hero, and makes him the new general. Gulliver frees Horatio from prison and tells him how to court Princess Mary.

The Lilliputians set Gulliver up in style, and he starts telling far-fetched stories, such as he was President Awesome of the United States, with his vice president Yoda. He says he died on an ice flow after saving a girl from the Titanic, but was revived.

Eventually, however, the Lilliputians find Gulliver’s ship and his iPhone. The iPhone contains angry messages from Darcy who found out that he plagiarized his writing sample, so now she has to come to do the story. When the Lilliputians find out he’s lying, they banish him to an island where he’s little and a giant very young girl dresses him up in dresses.

Then, General Edward defects to join the enemy Blefuscudian army. He finds and captures Darcy who has followed Gulliver to the Land of the Lilliputians and then attacks the Lilliputians.

How will Gulliver escape to save Darcy and the Lilliputians?

At its most fundamental level, this version of GULLIVER’S TRAVELS is a love story between Gulliver and Darcy. The message is follow your heart. Within this love story is the love story of Horatio and Princess Mary. In both cases, the commoner gets the princess or the unattainable beauty. Along the way, there’s a lot of scatological humor, some funny moments and a lot of disconnected vignettes.

Like several Will Farrell movies, this movie only seems intended to feature Jack Black doing his routines. One of the routines seems to be a highlight for the filmmakers, which seems to be an anti-war song Gulliver creates.

How this movie got a PG rating is beyond explanation. Jack Black pretends to say the “f” word; an “a” word is used several times to describe the general; wedgie, rear end and fat jokes abound; and, painful silly violence is throughout the movie, which also contains some sexual innuendo and liberal anti-war sentiment. What’s worse is that Gulliver relieves himself to put out the fire in the castle and sprays almost everyone, who end up drenched in his urine. None of these things are things that media-wise parents will want their children to see.

That said, the movie does rebuke lying, does tell people to be honest about who they are, and does have a fuzzy romantic ending that brings a tear to the eye. Since the ending saves the movie, this ending may just do that.

MOVIEGUIDE®, however, urges extreme caution for showing this to children, or even adolescents who are vulnerable to picking up these scripts of behavior. This is not a pleasant movie overall, and the audience at the screening didn’t seem to think it was very funny either.