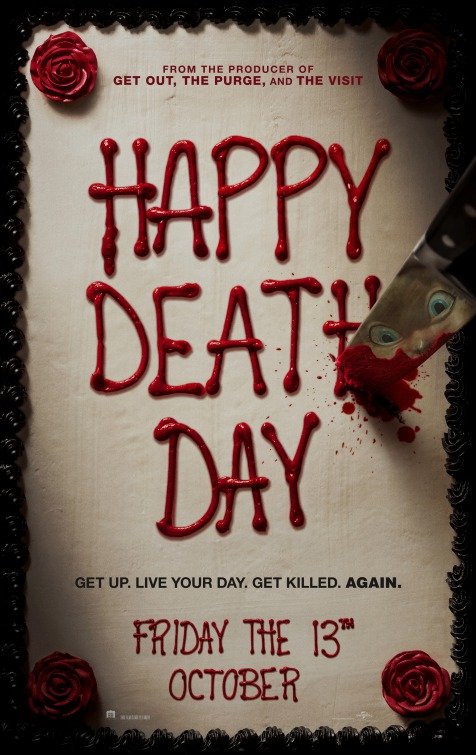 HAPPY DEATH DAY is a thriller about a troubled female college student trapped in a time loop repeating the same day, her birthday. Known for stealing other boyfriends and engaged in an affair with a married teacher, she is murdered repeatedly by an unknown assailant. A friendly, gentlemanly male student suggests she spend her time investigating the people on campus who hate her, to find the killer and stop him. His suggestion gives her a new lease on life. The problem is, each time she’s murdered, she wakes up weaker and weaker.

Based on the plot of GROUNDHOG DAY, HAPPY DEATH DAY is surprisingly entertaining and even morally uplifting. Although the basic story device reminds one of false beliefs about reincarnation and karma, it’s fun and inspiring to watch the heroine become a better, less selfish, more compassionate person. Jessica Rothe does a great job as the heroine. Despite its morally uplifting, redemptive premise, HAPPY DEATH DAY deserves extreme caution for several reasons. It contains lots of foul language, some intense and scary violence, and politically correct dialogue promoting homosexuality in one scene.

(Pa, FR, BB, C, PC, HoHo, LLL, VV, S, AA, M) Light pagan worldview where a female college student is trapped in a time loop where she can change her behavior from bad to good, with a minor reference to “karma” in one scene and an antinomian (or lawless) definition of love in another scene, but movie has a strong moral premise with redemptive qualities supporting repentance, forgiveness and moral sanctification where selfish heroine changes her ways and becomes a better person, including reconciles with her father (she and her father never got over her mother’s death, and it caused them to become estranged and resulted in the daughter’s bad behavior), plus there’s a politically correct subtext in one scene where the heroine encourages a man she dated once to celebrate his hidden (up to now) homosexual desires and “love” whomever he wants to love; about 31 obscenities (including one “f” word), one strong profanity, 14 light profanities, and an obscene gesture; strong, intense, often scary violence include implied stabbings, killer lights a car on fire with victim inside, gunshots, masked killer with knife chases and fights people, murder, suicide to save someone else’s life, image of a dead body with a bullet wound, image of a bloody knife, people hit with objects and thrown against walls two or three times, character kicked out of glass window, lunch tray is spilled twice on another person, woman deliberately pours chocolate milk over snobby person’s head, car suddenly slams into traffic officer; college student kisses married teacher and is having an affair with him, girl has a reputation for being loose, man watches two men kissing on computer video and is apparently getting ready to abuse himself, acceptance of homosexuality promoted; rear female nudity when woman deliberately walks outside wearing no clothes, and some images of female cleavage; alcohol use and drunkenness includes young man says college girl was “wasted” last night; no smoking or drugs; and, fat shaming but rebuked, young woman steals policeman’s gun to stop killer, young woman has a reputation for stealing other people’s boyfriends but changes, and young woman ignores her father’s phone calls but changes.

Though promoted like a horror movie, HAPPY DEATH DAY plays more like a thriller. The story is about a troubled female college student trapped in a time loop repeating the same day where she ends up being murdered repeatedly by an unknown assailant, so she’s forced to find the killer and stop him. HAPPY DEATH DAY is surprisingly entertaining and sometimes even morally uplifting, and not as gruesome as expected, but there is a lot of foul language and intense, scary violence. Also, the movie includes a scene where the heroine encourages another student to publicly announce his alleged homosexual “identity.”

The movie opens with sorority femme fatale Teresa “Tree” Gelbman waking up in a strange dorm bed. A guy named Carter is there and informs her she was pretty “wasted” the night before.

Tree assumes she slept with Carter, as does the viewer, but it’s revealed later that Carter is actually a gentleman and just let her crash in his room because she was too drunk to go back to her sorority house. However, it’s also revealed later that Tree has been sleeping with other guys, partly because she’s troubled by the sudden death of her mother and her estranged relationship with her father, who’s been unable to cope with the death of his wife. Tree is also having an affair with one of her teachers, who’s married.

Tree returns to her room at the sorority house. Her roommate, Lori, produces a cupcake with a candle on it because it’s Tree’s birthday. Tree blows out the candle but dumps the cupcake into the trash because she’s trying to stay slim.

That night, Tree walks alone to a party on campus, but before she gets there, she’s attacked and killed by a knife-wielding masked stranger. The viewer only sees the killer raise the knife when Tree suddenly wakes up in Carter’s dorm room again.

Tree soon figures out that, for some supernatural reason, she’s waking up and experiencing her birthday all over again. No matter how she changes her routine, she ends up being killed by the masked stranger.

Naturally, this experience is making Tree grow more and more distraught. Carter finally notices her distress. She confides in him about what’s happening to her. He suggests that she try to unravel who’s trying to kill her by investigating all the people who hate her. Carter’s suggestion gives her a new lease on life. The problem is, each time Tree is murdered, she wakes up weaker and weaker. The good news is that her experience is also making Tree a better person, less selfish and more caring.

This plot obviously echoes the plot of GRODUNHOG DAY, the classic 1990s comedy starring Bill Murray. HAPPY DEATH DAY is surprisingly entertaining. It has many nice twists as the heroine tries to figure out her situation and escape the killer stalking her. Like Bill Murray before her, Jessica Rothe does a great job going through all the changes that her character experiences as she tries to cope with her crazy but deadly situation in new ways. Eventually, her character learns how to reconcile with her father and gets to know Carter as the one person, other than her father, on whom she can rely.

The concept of repeating one day in your life and learning how to become a better person in the process is a pagan one that reflects the nominalism and belief in reincarnation of Eastern religions. Even so, however, the movie’s premise is morally uplifting. The premise argues that compassion or empathy leads to sacrifice and, eventually, is able to overcome evil, especially hedonistic, selfish desires and actions. In the process of playing out this premise, HAPPY DEATH DAY argues in favor of the idea that it’s never too late to repent, to turn away from evil and decide to do good. Israel Broussard also does a nice job playing the appealing young man who helps the heroine. The filmmakers develop a surprisingly positive romance between the two characters.

First, there’s lots of foul language. Second, although the filmmakers cut away from the more gruesome implications of the murders and deaths that occur in HAPPY DEATH DAY, the movie does contain a lot of intense, scary violence. The violence includes some bloody images and scenes where a killer in a scary mask attacks people, especially the heroine. There’s also a reference to the false Eastern idea of karma in one line of dialogue, but the reference isn’t repeated. Also, it becomes clear in the movie that the heroine has an implied reputation for sleeping with many people, including trying to steal the boyfriends of other girls. In fact, she’s even having an affair with a married teacher. Finally, the heroine finds out that one guy she dated one time is really interested in men, not women. She finds this out when she catches him watching homosexual porn on his computer, which involves the guy watching two men kissing on a video. Later, there’s a brief scene where she confronts the guy and urges him to publicly announce that he’s homosexual. You should “love” whom you want to love, she tells the guy. Of course, unlike the biblical definition of love, the movie’s definition of love here is irrational and antinomian, or lawless, with no objective truth or standards behind it.”

That said, the moral, redemptive elements of repentance, compassion and sacrifice are unexpectedly strong in this movie. It’s too bad the filmmakers chose to leave in so much foul language and insert the politically correct homosexual agenda into HAPPY DEATH DAY. As a result, the movie reminds MOVIEGUIDE® of the mistakes Disney made with its live action version of BEAUTY AND THE BEAST, mistakes which seem even more egregious and gratuitous in retrospect.