"Leftist Lies for All" 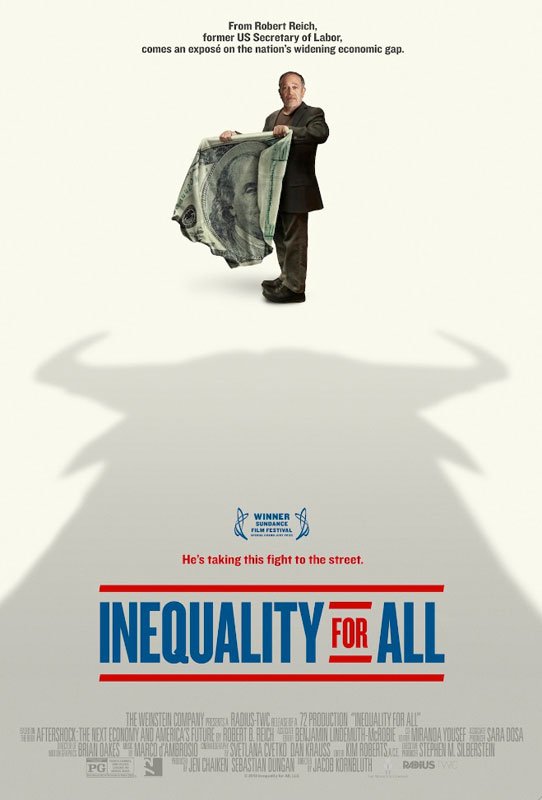 INEQUALITY FOR ALL is a one-sided documentary featuring former Secretary of Labor Robert Reich. Useful deceitful statistics, Reich falsely claims that the average income level adjusted for inflation has remained flat since the late 1970s while that of the Top One Percent has skyrocketed. He blames this alleged income disparity on tax cuts, de-regulation, and attacks on labor unions. He argues for higher taxes, stronger labor unions, more money for education programs that haven’t worked, and more welfare. The movie’s website also supports a $15 per hour minimum wage.

The production quality in INEQUALITY FOR ALL is good, but it’s a documentary about economics. That can be a dry topic, but the filmmakers try to liven it up with graphics and personal interviews. However, all that goes for naught because the filmmakers don’t interview even one expert who disagrees with Reich and can support their position with logical arguments and other facts. For example, economist Thomas Sowell has refuted all of Reich’s points in Chapter 5 of his brilliant book ECONOMIC FACTS AND FALLACIES. INEQUALITY FOR ALL is deceitful, abhorrent leftist propaganda.

(HH, RoRoRo, PCPCPC, CoCoCo, SoSoSo, AcapAcapAcap, Cap, L, V, MMM) Strong humanist worldview with very strong Romantic, politically correct propaganda that’s a Neo-Marxist, crypto communist, and socialist attack on American capitalism and a defense of the welfare state starring former Secretary of Labor Robert Reich, a radical leftist, and though Reich says he’s really pro-capitalist, all of his attacks and solutions seem the opposite; one or two light obscenities; brief violence as fights and tensions break out during employee and student protests; no sex; no nudity; no alcohol; no smoking or drugs; and, one-sided discussion that mentions none of the strong counter-arguments to the Neo-Marxist, socialist arguments and worldview of the protagonist and the filmmakers.

INEQUALITY FOR ALL is a one-sided, simplistic documentary featuring former Secretary of Labor Robert Reich. The movie basically offers Reich’s Neo-Marxist, socialist attack on the free market and conservative solutions to economic downturns and the current economic malaise. It offers none of the counter arguments and facts against Reich’s position, so it’s not a real “documentary.” Instead, it’s really just deceitful propaganda. Other than higher taxes, stronger labor unions, more money for education programs that haven’t worked, and more welfare, the movie points to a website for ways to support and enact these general solutions. The website also wants to raise the minimum wage to $15 an hour(!!!), which will just raise prices and increase unemployment.

Reich’s mantra throughout INEQUALITY FOR ALL is to stand up for those he feels are being “economically bullied” in the U.S. economy, the poor, the middle class, and workers. He purports that a strong middle class keeps an economy stable, which is true enough, but he wonders why, then, does there seem to be a growing disparity between the average worker’s income and that of the Top 1%? Reich also points to a statistic showing that the average money income level adjusted for inflation has remained flat since the late 1970s while that of the Top 1% has skyrocketed.

During INEQUALITY FOR ALL, Reich asks three questions: 1) What is happening with the distribution of wealth in America? 2) Why? 3) Is it important? As he begins to answer these questions, various people are interviewed who are either in the middle class, unemployed, or in the Top 1% of the wealthiest people in America. He claims that many middle class families are struggling – even those in two-income households. Over the years, he claims, the middle class has tried to cope with this income stagnation by: 1) women going to work; 2) men and women working more than one job and/or longer hours; and, 3) borrowing more, going into higher debt, and taking equity out of their homes.

The production quality in INEQUALITY FOR ALL is good, but it is a documentary about economics. That can be a dry topic, but the filmmakers liven it up with graphics and personal interviews, including interviews of a man running for a union election, a rich man who supports Reich’s viewpoint, and a family that’s struggling. However, all that goes for naught because the filmmakers don’t interview even one expert who disagrees with Reich and can support their position with logical arguments and other facts. Two of the best in that arena, of course, are two top black economists, Thomas Sowell, author of ECONOMIC FACTS AND FALLACIES (Basic Books, 2011) and BASIC ECONOMICS (Basic Books, 2010), and Walter E. Williams, author of MORE LIBERTY MEANS LESS GOVERNMENT (Hoover Institution Press, 1999) and RACE AND ECONOMICS (Hoover Institution Press, 2011).

Sowell points out in ECONOMIC FACTS AND FALLACIES that people who make up the Top 1% changes from year to year as people move in and out of that bracket. The same thing goes for Lowest 20% that Reich mentions, Sowell notes. For example, he says, between 1996 and 2005, more than half of the people in the bottom 20% had left the Bottom 20% (page 140). Sowell also points out that, while money income adjusted for inflation rose only 6% from 1969 to 1996, the average real income per person rose by 51%? How can this be, he asks? Because the average number of people per household has declined over the years! In fact, higher real incomes allow people to live on their own, away from relatives. There also has been, of course, a decline in the birth rate. Americans are simply having fewer children. Finally, Sowell adds that all of these income statistics leave out the amount of money, subsidies, loans, etc., people receive from their state government and from the federal government. They also tend to leave out health insurance and retirement benefits people receive (see Chapter 5 of Sowell’s book, on the myth of income inequality, including high executive salaries).

In an article, published in the Deseret News on Nov. 9, 2011, “Raising corporate taxes ends up hurting the workers most of all,” Walter Williams specifically addresses Robert Reich’s opposition to reducing America’s high corporate tax rate, which is giving an unfair advantage to our competitors in other countries with lower corporate tax rates. Williams rightly notes that high corporate tax rates are not only passed along to consumers. They are also passed along to shareholders in the form of lower dividends, and many of these shareholders are actually retired people over age 65. Higher corporate taxes also depress worker wages, Williams notes, adding, “A number of economic studies, including that of the Congressional Budget Office, show that workers bear anywhere from 45 to 75 percent of the corporate tax burden.” You can read Williams’ argument against Robert Reich’s defense of high taxes on the rich, including capital gains taxes and corporate taxes, at www.deseretnews.com/article/700196001/Raising-corporate-taxes-ends-up-hurting-the-workers-most-of-all.html?pg=all.

One-sided, deceitful leftist documentaries like INEQUALITY FOR ALL and leftist liars like Robert Reich are extremely dangerous. They mislead many, many people. The social policies of socialist lefties like Reich have created poverty and destroyed societies, even to the point of mass murder. Contrary to what Reich says, tax cuts have been a great benefit to millions of Americans, in the 1920s, the 1960s, the 1980s, the 1990s, and the first decade of the 21st century. They actually created more jobs, higher salaries, better benefits, and much prosperity. Also, regarding education, the federal government has spent billions more on education in the last 10 years, but test scores have remained flat (see www.huffingtonpost.com/2013/12/03/us-test-scores_n_4374075.html).

Dr. Ted Baehr went to Dartmouth with Robert Reich, who headed the Marxist SDS and organized the take over of the Dartmouth administration building. Dr. Baehr points out that Robert was a great speaker and nice guy, who believed the Marxist lies. Baehr went through his left wing period at NYU School of Law, when he worked with the Marxist National Lawyers Guild. Three wonderful older women friends of Baehr’s parents introduced him the Bible, and he came to Jesus Christ and was delivered from the bondage of the false philosophies of Rousseauian Romanticism and Marxism, into the freedom of the Good News of Jesus Christ.

Parents need to know what kind of people teach their children and teenagers in the public schools and at college. Sadly, Reich now teaches at the University of California at Berkley. Parents also need to be aware of what movies their children watch, whether in the classroom, at the movie theater, or on home video. Only Movieguide® (www.movieguide.org) has the kind of information on which parents and their children can rely.