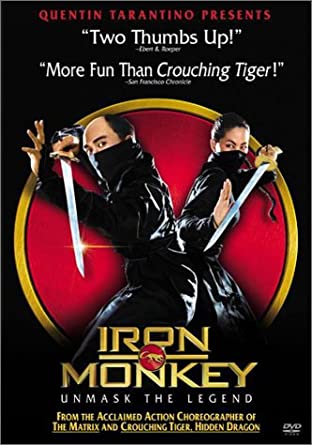 IRON MONKEY is a Robin Hood story set in the 1800’s China. Refugees from evil feudal lords are fleeing to cities for food and protection, only to find extortion from the local government. One man, Dr. Yang, nick-named “The Iron Monkey,” tries to right the many wrongs with his super-human Kung-Fu moves. He steals from the wicked folk and gives out to the poor, assisted by a beautiful nurse. Also, the Iron Monkey and his cohorts seek to thwart the plans of an unjust governor. Utilizing clever disguises and attempting daring rescues, the “good guys” manage to throw a wrench into the works of an ancient and evil system of oppression.

Similar to CROUCHING TIGER, HIDDEN DRAGON, this movie is laden with the typical Kung Fu physical violence. Both movies show characters that can break all the rules of gravity, inertia and centrifugal force. There is lots of running about on the roofs of buildings, and there is even an ugly Kung-Fu witch – just like the one in CROUCHING TIGER, HIDDEN DRAGON. Caution should be exercised with this film, due to violence and the allusion to power from a false spiritual system

(H, Pa, B, O, L, VVV, S, AA, M) Humanistic world view with New Age pagan mystical implications, with some biblical truths such as if you’re good & honorable, everything will work out, & bad will be defeated by good; also, the characters have powers with no explanation of their origin & there is a Kung Fu witch; 5 obscenities & no profanity; extreme Kung Fu-type violence including punching, kicking, hitting with all types of objects, whipping, burning to death, attempted rape, one cut throat, using blood from wound, bleeding mouth, metal ball in eye socket; depicted rape attempt, stopped just in time, & instances of wife swapping with other officials; no nudity; alcohol use & abuse; no smoking; and, miscellaneous immorality such as lying, stealing, kidnapping, & rude insults.

IRON MONKEY is a Robin Hood story set in the 1800’s China. Refugees from evil feudal lords are fleeing to cities for food and protection, only to find extortion and bullying from the local government. One man, Dr. Yang, nick-named “The Iron Monkey” (after a local statue), tries to right the many wrongs with his super-human Kung-Fu moves. He steals from the wicked folk and gives out to the poor. He is assisted by an attractive “nurse,” Miss Yang, who has feelings of her own for the warrior.

The local Governor is a buffoon who employs a police chief named Fox and several “dishonored” monks to capture The Iron Monkey. A stranger named Wong Kei-Ying and his young teenage son come to town for business, only to be swept up and wrongly accused in the manhunt for The Iron Monkey. Through several twists, the son of Kei-Ying is to be held prisoner until Kei-Ying helps capture the Iron Monkey. Kei-Ying is the master of the famed “Shadow Kick.” Dr. Yang rescues the boy from prison, becomes friends with Kei-Ying, and impersonates an Imperial “big wig” to steal more money. Soon the real big wig comes and takes over, ousting the governor. He is revealed to be an ex-Shaulin Monk who is skilled with several nasty forms of Kung Fu, including a deadly, poison striking hand move.

With typical Kung-Fu overacting and corny attempts at humor, IRON MONKEY makes up for acting in what it delivers in action. Never has there been so much broken pottery and furniture than in IRON MONKEY. There is little bloodshed compared to most American films, but this movie is definitely not suitable for children.

The movie shows a father who is too strict on his son, striking him on the head, but later he becomes gentle and affectionate. There is no real nudity or any sex scenes, though the governor plays games with his nine wives (all dressed) under a big blanket.

In summary, THE IRON MONKEY is a good Kung Fu film, made in Hong Kong, which delivers the goods to fans. However, if you really want to see a beautifully made Kung Fu movie, rent CROUCHING TIGER, HIDDEN DRAGON.

As with all Kung Fu movies, however, the big caution, besides violence, is that it showcases great power without revealing the source of that power. Clearly, the source is a false religion, or a false god. The protagonists often have their training and their bodies as their gods, but the villains they fight have this same training, so there is no clear edge. In addition, despite a lifetime of discipline and training, and despite some great combat opportunities, many of the Kung Fu participants end up betrayed or dead, and thus, there is no lasting victory. Such is the dark end of all whose life purpose is outside the realm of the One True God.