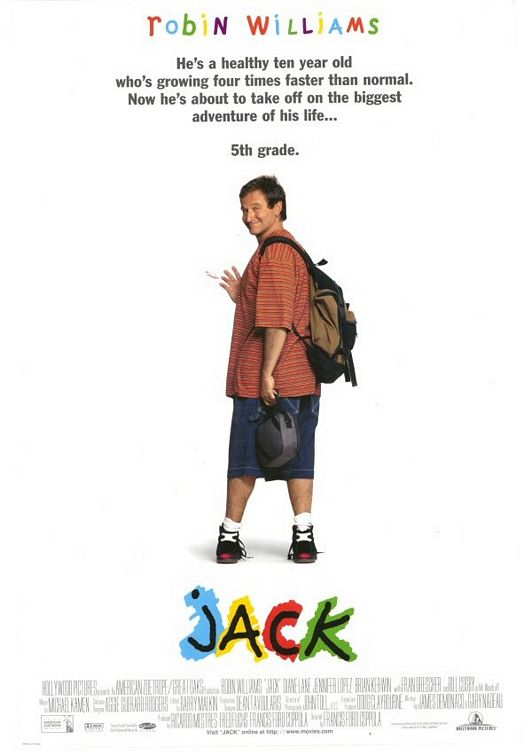 JACK is a comedy starring Robin Williams as a 10-year-old boy in a man's body. Similar to BIG, it demonstrates the positive aspects of a child-like nature, while also demonstrating love, friendship and acceptance of responsibility. Nevertheless, with gross talk, childish behaviors and some sexual situations, this isn't a movie for small children.

He has acted like a child in many movies, but JACK offers Robin Williams the role of a real child, a ten-year-old boy who grows four times faster than anyone else. When Jack is born, the doctor’s tell his mother that by the time he is ten, he will look like a 40-year-old man. We jump ahead 10 years, and Jack has a private tutor because his parents are afraid that he will be treated badly by the outside world. Mr. Woodruff surmises that Jack is bored and wants to become friends with other children. Therefore, Jack’s parents introduce him to the 5th grade. At school, Jack makes friends, but bad health forces him to drop out. Jack’s friends try to get him to come out and play. Eventually, Jack returns to school and continues to have a rewarding life.

Unlike BIG, there is no magical premise to alarm parents. However, there is plenty of gross behavior and implied pornography use to alert parents that Jack’s friends aren’t positive role models. There are some sexual references, and Jack almost gets into a bar fight. At one point, a doctor tells Jack’s parents that aging is “God’s little trick on humanity.” Nevertheless, with few comedies out now, JACK positions itself to stand tall at the box office because it has many moral attributes.