JEM AND THE HOLOGRAMS

"Believing in Yourself Goes Viral" 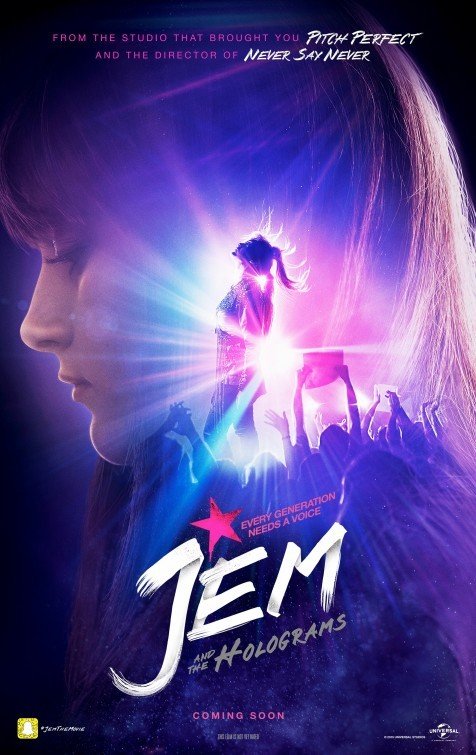 JEM AND THE HOLOGRAMS focuses on Jerrica, a teenager who inherited the musical gifts of her father, who passed away when she was young. He left her with Synergy, a robot he created with a holographic message from him hidden inside. Jerrica must travel to Los Angeles and follow the clues Synergy provides to activate the hologram message. She gets her chance when a video of her singing goes viral on the Internet. A record company signs her and makes her into a pop star. However, Jerrica learns there are prices to pay for fame and fortune. Based loosely on a 1980s cartoon series, JEM AND THE HOLOGRAMS has its entertaining moments. The music is catchy. However, the plot leaves a little bit to be desired. The worldview is pro-family, with some redemptive elements of forgiveness. Despite this, the movie has a superficial, materialistic undertone, and a Romantic message of following your dreams. There is also some brief foul language and some immoral behavior, like stealing, which the characters get away with in the story. So, MOVIEGUIDE® advises caution for older children.

(B, C, Ro, Pa, Ho, L, N, M) Light moral worldview with some redemptive elements that is pro-family (dead father also leaves his daughter a positive legacy) and includes some repentance and forgiveness for wrongdoings involving others, mitigated by light Romantic worldview encouraging young people to follow their dreams, some pagan elements stressing material things and fame as well as containing some disregard for morality, plus implied homosexual characters briefly shown in several scenes; nine obscenities and light profanities; no violence; no sex; upper male nudity after man gets out of the shower; no alcohol; no smoking or drugs; and miscellaneous immorality includes girls sneak out of house after curfew, a group of teenagers trespass on a pier after hours and run away from the police, a girl steals money from a man’s wallet, a man borrows a car without permission, a group of teenagers sneaks into a building unauthorized to retrieve something from a safe, and a woman is condescending towards other people on multiple occasions.

JEM AND THE HOLOGRAMS is a musical about a teenage girl who becomes a pop sensation after an Internet video of her singing goes viral. JEM AND THE HOLOGRAMS is entertaining, with a light moral, redemptive worldview and some catchy music, but the lightweight plot leaves a little bit to be desired, and there are some Romantic elements and brief but light foul language.

In JEM AND THE HOLOGRAMS, teenage sisters Jerrica and Kimber now live with their aunt and foster sisters after their parents passed away. Their father was an inventor and amateur musician, always telling them to overcome their fears and achieve their dreams. He created a small robot named Synergy and passed it along to Jerrica, but it doesn’t work. Jerrica treasures the gift from her father and takes it wherever she goes as a reminder of him. She inherited her father’s musical abilities and often writes her own songs as a way to express herself. However, her natural shyness keeps her from sharing them with anyone beyond her family.

With encouragement from Kimber, Jerrica decides to record a video of her singing one of her songs, but she dresses in costume and hides behind the persona of Jem, a character she created when she was younger. Although she records the video, she chickens out at the last minute and decides not to post it online. Kimber realizes this and decides to post the video without Jerrica’s permission. After sharing it across social media, the video generates millions of views, capturing the attention of Starlight Records in Los Angeles. Jerrica is shocked when she receives a record deal. She negotiates for her sisters to be in her band.

When they arrive in L.A., Jerrica is reinvented as Jem and given a new look that doesn’t include the special earrings that Jerrica’s father gave to her. They are confiscated and locked in the company safe. Rio, a male Starlight intern, is assigned to look after the girls. Later, it’s revealed his mom owns the company, and she’s forcing him to learn the family business. As the girls prepare for their first concert, Synergy wakes up and starts giving Jerrica scavenger hunt clues that her father had programmed into him. Breaking a few rules, the girls in Rio set out to find the clues. Along the way, Jerrica most navigate the pitfalls of the entertainment industry and learn for the first time who she really is.

JEM AND THE HOLOGRAMS is based on the 1980s television cartoon series of the same name, but the modern iteration only loosely resembles it. Fans of the animated show may be disappointed that this Jem’s story falls more in line with the rise of Justin Bieber, thus killing any originality or nostalgia. Those unfamiliar with the television show, namely the younger crowd, will be more forgiving. At least, the music is catchy and provides the hook to reel in its target audience. The plot itself leaves much to be desired, however, having been rehashed by Hollywood for decades. The only unique element is the odd inclusion of the cute, puppy-like robot Synergy, who comes across as a sci-fi misfit in what is otherwise a teenage musical.

There are also parts of the story that make no logical sense but are obviously there to keep the movie going in the absence of any substantive material. JEM AND THE HOLOGRAMS has a moral, redemptive worldview stressing the importance of family and values like forgiveness. However, this is mitigated by a Romantic follow your dreams message. The movie also has a materialistic undertone that puts social media, fame and popularity on a pedestal. Although the main characters rebel against certain aspects of these superficial values, they don’t entirely reject them either. Of primary concern to children is some brief but light language and a few immoral incidents like stealing, which the characters are allowed to get away with in the story. Therefore, JEM AND THE HOLOGRAMS warrants caution for older children.

Rent or Buy JEM AND THE HOLOGRAMS: