JOURNEY TO CENTER OF EARTH 3D 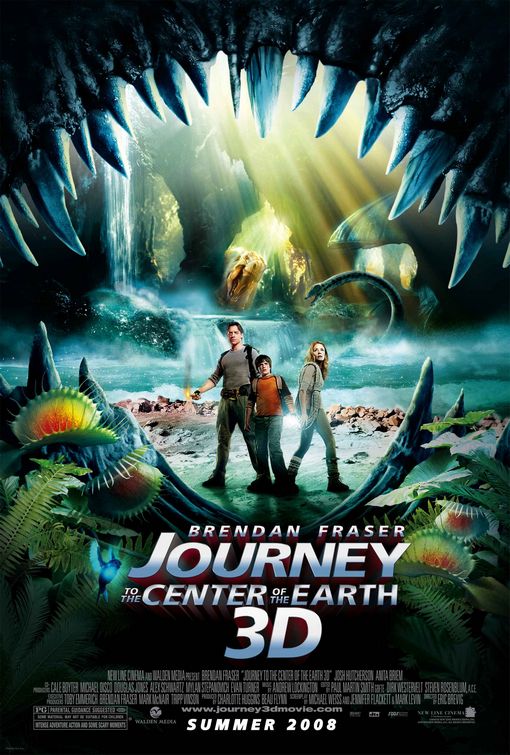 JOURNEY TO THE CENTER OF THE EARTH 3D is not a remake of the Jules Verne book but rather a new story based on its fantastic adventure. In the movie, volcano scientist Trevor and his nephew Sean seek Sean’s long-lost father who was doing research on the premise that the Verne book is based on a true account! An Icelandic guide named Hannah joins them. She helps them navigate the rough terrain to go to the very center of the earth. Using state of the art 3D technology, the world they find comes to life in beauty and awesome landscapes. The inhabitants of the land are frightful creatures threatening the trio of explorers.

This movie is a fun roller coaster ride augmented by the 3D technology. The action sequences are fun, but the story itself is a bit thin. Brendan Fraser as Trevor delivers a solid performance, but there’s a lack of chemistry between the characters. The directing is sharp; it moves the plot quickly along. There are two instances of foul language, but, otherwise, the movie is free of negative elements. The scary creatures, however, may frighten younger children.

(BB, H, L, V) Strong moral, pro-family worldview with some humanist qualities; two mild obscenities and one scientific word sounds like the same obscenity; action film type violence includes flying carnivorous fish and aggressive dinosaur, which could be frightening to small children, along with the shock value of 3D effects; no sexual content; no nudity; no alcohol; no smoking or drugs; and, nothing else objectionable.

Trevor, a college professor played by Brendan Fraser whose scientist brother, Max, disappeared during a volcano expedition ten years earlier. Trevor’s work at the university has been based on his brother’s theories on seismic activity and volcanic unrest, but the funding is about to be pulled out from under him.

Frustrated, Trevor returns to his disheveled home only to find out that his nephew, Max’s son, Sean (played by Josh Hutcherson), has arrived for a two-week visit. While going through a box of Max’s belongings, the two discover a well-worn copy of Jules Verne’s JOURNEY TO THE CENTER OF THE EARTH that contains Max’s scientific notes in the margins. Trevor realizes that his brother was a “Vernian,” someone who seeks to prove that the book by Jules Verne is based on a true story! Trevor and Sean set out to discover what Max discovered and to vindicate his life long research.

Following the clues from Max’s notes, Sean and Trevor head to Iceland in search of a fellow Vernian, an older scientist whose name Max had written in the book. When they locate the man’s address, they find the man’s daughter, Hannah (played by Anita Briem), works as a guide through the dangerous Icelandic volcanic terrain. Trevor hires Hannah to lead them to the volcanic area that Max notated in the book.

The trio enters the earth through this volcano. They delve deeper into the earth and encounter fanciful creatures that they must battle to make it to the center. Once they arrive at the center, they are in for a surprise. Then the task becomes to find their way of escape.

JOURNEY TO THE CENTER OF THE EARTH is a fun summer movie that’s big on adventure. The added 3-D technology brings an “in your face” element to the action. The old cardboard 3D glasses are not used. In their place are stylized plastic glasses. The movie is on the cutting edge of 3D technology and holds many visual surprises. The world they find at the center of the earth is beautiful and awe-inspiring, augmented by the 3D effect, which makes it appear more lifelike.

The action sequences are fun, but the story itself is a bit thin. Hutcherson as the son seeking his father gives a strong performance, but newcomer Briem’s acting is a bit weak at times. Fraser delivers a solid performance, but there’s chemistry lacking between the trio of characters. The directing is sharp, moving the plot quickly along. JOURNEY TO THE CENTER OF THE EARTH 3D is a fun, popcorn movie that takes the audience on a mostly “clean” ride.

Rent or Buy JOURNEY TO CENTER OF EARTH 3D: