JUMPIN’ AT THE BONEYARD 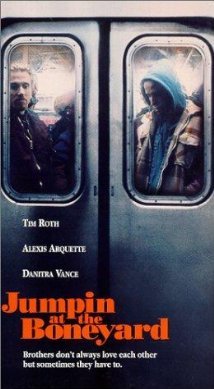 JUMPIN' AT THE BONEYARD is a character study of two men--a blue-collar worker and his crackhead brother--who seek salvation during an odyssey through the Bronx neighborhood of their childhood. With its difficult subject matter, tough language and tragic ending, this film is no crowd pleaser, but some convincing acting does create empathy for the people these characters represent.

JUMPIN’ AT THE BONEYARD refers to a game played by brothers Manny and Dan in a Bronx cemetery. Fifteen years later, Dan, a crackhead, breaks into Manny’s apartment, accompanied by zoned-out girl friend Jeanette. Manny walks in on them and erupts into rage and compassion. To bring Dan to his senses, the and blunt-tongued Manny drags his brother all over the Bronx to connect him with the past and reorder the present. Eventually, the two set out for the drug rehab center, where Dan intends to become permanently clean and sober. Alas, Jeanette reappears at just the wrong time. When Manny intervenes, she guns him down.

JUMPIN’ AT THE BONEYARD, with its deliberate pacing, difficult subject matter, tough language, and tragic ending, is no crowd-pleaser. Indeed, with the film’s one glimmer of hope blasted away in the final moments, the entire story seems virtually pointless. However, for what it’s worth, some very convincing acting and dialogue do create empathy for the people these characters represent. Moreover, they portray, even through negative example, the critical importance of a stable home and caring friends in setting the course of our lives.