"Non-Stop Action, But with Humor" 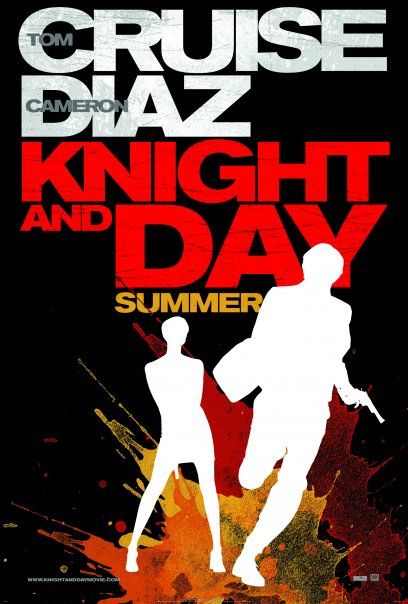 The new action comedy KNIGHT AND DAY starring Tom Cruise and Cameron Diaz has plenty of laughs and thrills, but viewers should be prepared for plenty of action with a high body count. A young woman named June Havens, on her way through an airport to her sister’s wedding, has a chance encounter with fellow traveler Roy Miller. Roy unwillingly involves June in a fight over a world-changing invention. Suddenly, her life spins out of control, and the bad guys Roy warned June about soon show up and take her for a treacherous ride. Roy comes to the rescue, out-running a bus, leaping from moving vehicles, and saving the day. Is he the good guy or the bad guy?

The filmmakers behind KNIGHT AND DAY do a slick job packaging this smooth action comedy. Cruise and Diaz deliver fun performances. The violence, however, is strong, with a high body count. If you like more realistic thrillers, KNIGHT AND DAY may not appeal to you, but it is very entertaining. There are some implausible moments, plot holes and foul language, so caution is advised. See our review at Movieguide.org for details.

(BB, C, H, Pa, LL, VV, S, A, DD, M) Strong mostly implied moral worldview of man trying to protect two innocent people from evil forces with a redemptive scene of sacrifice where a character risks being shot to death to save the life of an innocent person, with some humanist, pagan overtones; about 10 obscenities (including one “f” word), two strong profanities and 10 light exclamatory profanities; lots of strong, intense action violence, including martial arts, plenty of gunplay and machine-gun fire, knife fight, people shot, various explosions and car crashes, and reckless driving (car and motorcycle); no depicted sex scenes, but some innuendo, such as woman under the effects of a truth serum says she would like to have relations with a male character, and characters kiss passionately in two scenes; upper male nudity, plus woman in bikini and woman’s legs stick out of a bathtub; characters drink wine, champagne; some smoking, plus use of truth serum and drugs to knock people out; and, kidnapping, theft, lying, deceit, some moral relativism in regard to killing, but good wins out by the end.

For summer audiences looking for thrills and adventure, “Knight And Day” may be the ticket, but be prepared since this over-the-top actioner contains some strong action violence with a high body count. June Havens (played by Cameron Diaz,) on her way through an airport to her sister’s wedding, has a “chance” encounter with fellow traveler Roy Miller (played by Tom Cruise.) Soon after, her life spins out of control, and their lives become entwined; and, they can’t get apart, regardless of how hard they try.

The plane Roy and June get on seems mysteriously empty. While June’s in the bathroom, the few passengers, flight attendants and even the two pilots try to kill Roy, who’s clearly involved in some kind of espionage plot. Roy manages to land the jet in a cornfield off a highway. Before knocking June out with a drug, he warns June to beware of some guys who will claim that they are federal agents and that Roy is a rogue agent.

Following their plane ride gone wrong, Roy helps June get to her intended destination, Boston. Regrettably, the same bad guys Roy had warned her about soon show up and take her for a ride. Roy comes to her rescue (a recurring theme). He, out-runs a bus, leaps from moving vehicles, and generally saves the day. Despite the fact he is continually spewing out an armory-load of gunfire, mowing down lots of bad guys, he seems to honestly care for June’s well being, but June is somewhat bewildered and distraught over everything that’s happening.

Eventually, viewers discover that Roy is trying to help a young genius get his world-changing invention into the right hands. Or is he? That’s what June has to find out for herself.

The series of crosses and double-crosses, accompanied by several romantic misfires, reveals that either Roy or the Agency operatives (led by an agent named Fitzgerald, played by Peter Sarsgaard) who pursue him could be enemies of the state. From the cornfields of Wichita to the causeways of Boston, from the trains and rooftops of Austria to a private island hideaway, from the streets of Seville to the tip of South America, this movie moves. There’s a lot of beautiful scenery, and a fluid, though implausible, plot to carry viewers along.

As the heroine, Diaz plays June, a woman under pressure who’s been through a lot, but she tenaciously holds on to some core inner values, believing the best in people in general, and Roy in particular. Cruise carries his part with smooth confidence. And, most importantly, although he doesn’t seem like any Boy Scout, he is quite likeable. For this movie, that’s key, and it makes KNIGHT AND DAY work really well. The relationships aren’t deep, but they work fine. Neither character has sufficient time to ask deep questions. And, for the sake of the audience, that’s probably a good thing.

James Mangold, the accomplished director of WALK THE LINE and a recent remake of 3:10 TO YUMA, is a man of obvious talents. At the helm of this streamlined action-comedy, he keeps it moving at a breakneck pace. Working from a handily-crafted screenplay by Patrick O’Neill, the pace is suitably relentless, taking the audience on a fun roller coaster ride that leaves little time for questions. Helping things along is some clever dialogue between Cruise and Diaz. The repartee between the two stars works.

The cinematography of DP Phedon Papamichael is lush and deep, taking viewers to places they can sink into for as long as editors Michael McCusker and Quincy Z. Gunderson allow them to linger. Their pacing is dead-on. It hangs on while the characters interact, but the rest of the time it flies.

For an action piece, there are some incidents of strong foul language mixed with lighter foul language. Aside from a couple incidents of innuendo, Cameron Diaz in a bikini and her legs sticking out of a bathtub, there’s relatively little skin and no sex scenes. There is, however, brief sexual innuendo when Diaz expresses lust for Cruise’s character while under the effects of a truth serum.

KNIGHT AND DAY has a sizeable body count. Whether through martial arts encounters taking out 10 enemies in two minutes, wiping out dozens of foes in a warehouse by spraying gunfire, or by dismantling a freeway-full of anonymous vehicles in a car chase, KNIGHT AND DAY is all about the action and the violence. It doesn’t show much blood or graphic carnage, or focus on dead bodies, but there is plenty of action violence throughout the story. It becomes clear eventually, however, that the hero is trying to protect two innocent people, while keeping the inventor and his invention out of the nefarious hands of the bad guys.

KNIGHT AND DAY is pretty much a light fantasy. If you’re looking for a realistic depiction of the double-crossing world of espionage, then this might not be the piece for you. If, however, you want a hero, a damsel in distress, plenty of humorous banter, and lots of action, this is a very entertaining, fun movie.