"Ranchers Fight Back Against a Rich Thief" 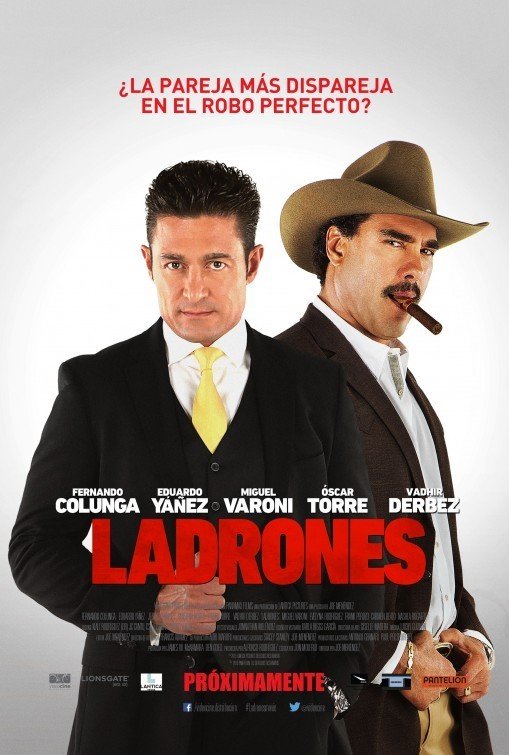 In LADRONES, an action comedy partly in Spanish, Maria and her daughter, Maribel, live on their Texas ranch, which has been in their family for generations. Greedy businesswoman Miranda Kilroy sends her henchman to steal the land grants of all the town’s ranch families, so she can use the land for a new development. Maribel hires retired thieves Alejandro and Santiago to help them retrieve the grants and restore what’s rightfully theirs. With Maria and Maribel’s help, Alejandro and Santiago organize the other townsfolk to steal back the land grants, but complications ensue.

The tone of LADRONES makes it feel like an amateurish OCEANS 11. This comedy abounds with humor, but much of it falls flat. Perhaps it's too cliché or tries too hard to draw laughs. However, unlike most heist plots, this one has a moral end in mind. That said, there is enough foul language, violence and suggestive content to require caution for older children. Some scenes feature occult superstition, which seems to work at one point. Media-wise viewers probably will want to avoid LADRONES despite the positive worldview and ending.

(BB, O, LL, VV, S, D, M) Overall strong moral worldview where justice is sought for wrongdoings, but a spiritualist conducts a superstitious ceremony involving occult rituals; 14 obscenities and profanities; strong violence includes a man is shot and killed, a man is shot in the shoulder, a thief hits a woman with a rod, a car crashes, two men engage in a first fight, sheriff deputies shoot up cars, a girl punches a man in the face, a woman beats up security guards, a man gets tasered in a couple of scenes; light sexual content includes reference to a woman's big breasts, there is a "clothing optional" joke, and man is implied to be visibly aroused; no alcohol use; some cigarette smoking but no drugs; and, woman steals the land grants of ranchers and intends to take their land, plus daughter lies to her mother.

Partly in Spanish with English subtitles, LADRONES is an action comedy sequel about two reformed thieves, who are asked to help recover stolen land grants for Mexican-American families in Kilroy, Texas. A sequel to a 2007 Spanish-speaking movie, LADRONES has a more positive ending than the first movie, but some of the content warrants caution for older children.

In LADRONES, Maria and her daughter, Maribel, live in Kilroy, Texas on their family ranch, which has been handed down to them for generations. Like them, many Mexican-American families own multi-generational ranches. In the 1800s, all of their land grants issued by the government were buried safely away from greedy outlaws who would try to steal them. The only man who knew where they were was killed in an attempt to seize his land.

Now more than a century later, Maria has found them buried on her property and keeps them stored in a safe. Miranda Kilroy is a greedy businesswoman whose ancestors were the founders of the town. Now, she has designs on stealing the land grants to make room for a new destination resort. She sends a henchman to do the dirty work, and he forces Maria to hand over the grants.

Kilroy’s law enforcement is corrupt, leaving the families no choice but to find an alternative way to retrieve the stolen land grants. Maribel visits high-powered former thief, Alejandro, in an effort to get his help. He is known among the Mexican community as a sort of Robin Hood who fights for the helpless. After some convincing, Aejandro agrees and enlists his former partner in crime, Santiago. They try to get their former sidekick, Emilio’s, support, but he refuses now that his loyalty is to his employer – the FBI. Maria and Maribel lend their scientific and tech skills, while Alejandro and Santiago hold auditions for the townsfolk to show off any talent that will contribute to the heist. Maribel’s boyfriend, Ray, proves he’s impervious to pain, while Josefa claims to be a spiritualist who can call upon the forces of superstition when needed.

The team travels to Miranda’s prized resort, where she keeps the stolen grants in a hidden safe protected by a force field. Only a pendent worn around the henchman’s neck can open it. Each person on the team is assigned a task. Alejandro gains the trust of Miranda and wins a position in her inner circle. He relays information to the team as they enact their plan.

Although there are some major kinks, they are successful in getting the grants. Back in Kilroy, the families celebrate as they finally have definitive proof of their land ownership in hand. However, the celebration is short-lived when Miranda shows up with the sheriff’s department and steals the land grants again at gunpoint. All hope seems to be lost, but Alejandro and Santiago aren’t ready to give up just yet.

The main fault of LADRONES is that it’s too cute by half. It tries to be overly funny. Asa result, much the humor falls flat. This unnecessarily elongates some scenes and steers the plot onto unrealistic tangents. That said, the movie is fairly well structured and hits the mark just enough to keep it mildly entertaining.

It’s difficult not to call this movie an amateurish version of OCEAN’S 11 because many of the same elements are there. However, LADRONES has more of a ragtag, wild west feel. In fact, it might have been more fun to stick with a western theme altogether since that’s where the movie begins and ends.

The movie’s overall worldview is a moral one. Reformed bad guys turn good and fight for justice when the powerless are unable to defend themselves. However, one character calls herself a spiritualist, using various superstitions from the occult world as a device in a couple scenes. Initially, she doesn’t believe she actually has real powers, but later in the movie, a superstitious ceremony takes place proving her powers are real. LADRONES also has some gunplay and fistfights, including a man getting shot and killed. Finally, enough foul language and suggestive content also exists to require caution for older children.

All in all, despite the positive worldview, media-wise viewers probably will want to avoid LADRONES.

Here is the online link to MOVIEGUIDE®’s review of the first movie: https://www.movieguide.org/reviews/Ladron-Que-Roba-A-Ladron.html