"Complex Portrayal of a Conflicted Gangster" 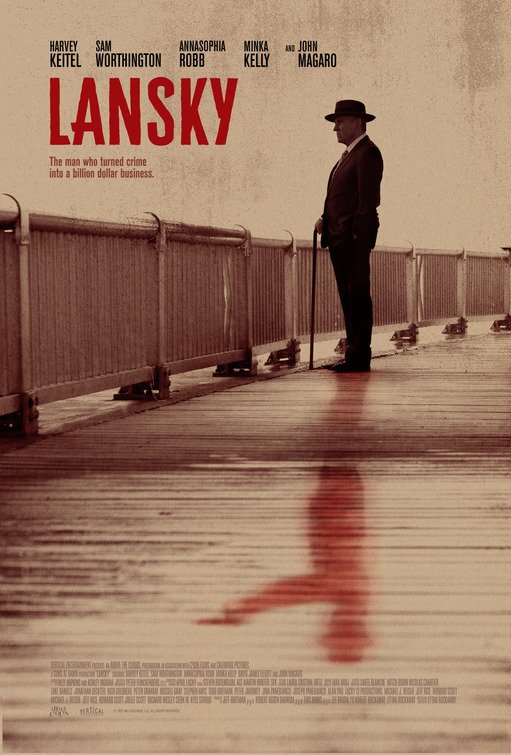 Recounting the life of Mafia gangster and accountant Meyer Lansky through a series of interviews with a troubled writer, LANSKY brings to life one of America’s most notorious figures in a three-dimensional way that also shows some noble aspects of his career. With frequent foul language and frequent brief bursts of graphic violence, the movie is aimed at an adult audience, which should enjoy compelling lead performances by Harvey Keitel as Lansky and Sam Worthington as writer David Stone. By the end, Lansky is shown attending synagogue and telling Stone emotionally that “I’m an angel. . . with a dirty face.”

Writer-director Eytan Rockaway uses the framing device of the interviews to give the movie a unique approach rather than a straightforward, chronological account of Lansky’s life. While this seems to make the movie slow and drifting earlier in the movie, it pays off strongly in the second half, making this a worthy movie for any mature adult to consider. However, its frequent foul language and occasional bursts of graphic violence make this a movie that merits extreme caution for any viewer.

(RoRoRo, B, AC, P, LLL, VVV, S, A, MM):
Dominant Worldview and Other Worldview Content/Elements:
Very strong Romantic worldview in a biographical drama about a famous mobster where the mobster figures the ends justify any means he uses, including violence and criminality, with some moral elements and references to opposing Nazis and communists and helping the government during World War II
Foul Language:
At least, 35 obscenities (more than half are “f” words), two JC profanities, five GD profanities
Violence:
Graphic shootings and stabbings, including one man is bound and gagged and gets shot in the head in front of his wife, several quick depictions of men bound and gagged, two men are seen from a distance covered in blood and hanging from the ceiling (scene implies terrible torture), two scenes where a man violently tussles with his wife, man throws a vase at his wife, but wife is eventually subjected to being gagged and given electroshock treatment by husband because if her criticism of him, in terrible revenge
Sex:
A married man is seen kissing a woman who’s not his wife briefly but passionately, and it is implied and discussed that they are having an affair, although this is after he’s been thrown out of his home by his wife
Nudity:
None
Alcohol Use:
A few scenes of alcohol casually being drunk in clubs and bars
Smoking and/or Drug Use and Abuse:
No smoking or drugs; and,
Miscellaneous Immorality:
Illegal gambling and money laundering depicted throughout, and mobsters engage in lies, deceit and backstabbing against each other and their external enemies as well.

LANSKY tells the life story of famed Mafia gangster and accountant Meyer Lansky through a series of interviews with a troubled writer, bringing to life one of America’s most notorious mobsters in a three-dimensional, complex way that also shows some noble aspects of his life. LANSKY has frequent foul language and bursts of graphic violence and is squarely aimed at an adult audience, with compelling lead performances by Harvey Keitel as Lansky and Sam Worthington as the troubled writer.

The movie opens with writer David Stone begging his wife for understanding of his financially precarious situation, as he prepares to meet with the now-elderly Lansky for interviews that he intends to turn into a book. Their argument leads to him having to move into a hotel for the duration of the project.

At first, the movie is low-key and a bit static and boring, as much of the first half-hour consists of their sitdowns in a diner and other locations as Lansky recounts his life. As the movie progresses past that point, however, the plot and pacing pick up as both Stone and the viewers are served Lansky’s colorful recollections of his rise to becoming known as “the Mob’s accountant” and building a gambling empire that stretched from Havana to London.

Along the way, the movie shows Lansky’s associations with other legendary mobsters including Bugsy Siegel and Lucky Luciano. Lansky frequently denies wrongdoing and knowledge of Mob tactics even to his biographer, Stone, but the movie shows he used ruthless tactics to achieve his success.

That success eventually draws the attention of federal agents, who are trying to nail Lansky before he passes away for having an illicit fortune they believe totals $300 million. Meanwhile, Stone finds himself tempted by a beautiful woman at his hotel, who first seduces him and then reveals she’s an FBI informant who’s been giving the feds the secrets Stone has been revealing to her about Lansky. When she disappears overnight, the Feds want Stone to turn informant on Lansky, betraying the aged gangster’s trust and friendship.

Will Stone do the FBI’s bidding, and if so, will he be able to keep himself and his family safe?

LANSKY could have been a high-octane thriller, but writer-director Eytan Rockaway takes a more understated approach that at first doesn’t seem to be providing enough drama to be entertaining. At first, viewers might easily wonder what’s the point of following Stone’s moral and financial dilemmas in a movie named solely after Lansky. However, a couple plot twists in the middle pay off strongly, weaving the two men’s travails together in an interesting parallel that drives the second half to a greater emotional payoff.

The movie has plenty of foul language throughout and brief scenes of bloody violence that merit its R rating. Yet, Writer/Director Eytan Rockaway still handles the mature subject matter with class and restraint rather than exploitation.

Harvey Keitel as Lansky and Sam Worthington as Stone both deliver solid, three-dimensional performances as the conflicted lead characters (Stone is a fictional creation for the movie). Lansky is intriguingly shown to have some positive sides, as he was very pro-American and pro-Israel, and led a huge anti-Nazi drive by the Mob, in addition to harboring antipathy for the Communist takeover of Cuba.

Despite scoffing at the idea that Lansky has any positive qualities when he discusses the fact his son had debilitating cerebral palsy, by the end, Lansky is shown attending synagogue and telling Stone emotionally that “I’m an angel. . . with a dirty face.”

Writer: Writer-director Eytan Rockaway uses the framing device of the interviews to give the movie a unique approach rather than a straightforward, chronological account of Lansky’s life. While this seems to make the movie slow, drifting earlier in the movie, it pays off strongly in the second half, making this a worthy movie for any mature adult to consider. However, its frequent foul language, occasional bursts of graphic violence make this a movie that merits extreme caution for any viewer.