"Adrift in the Storm of Love" 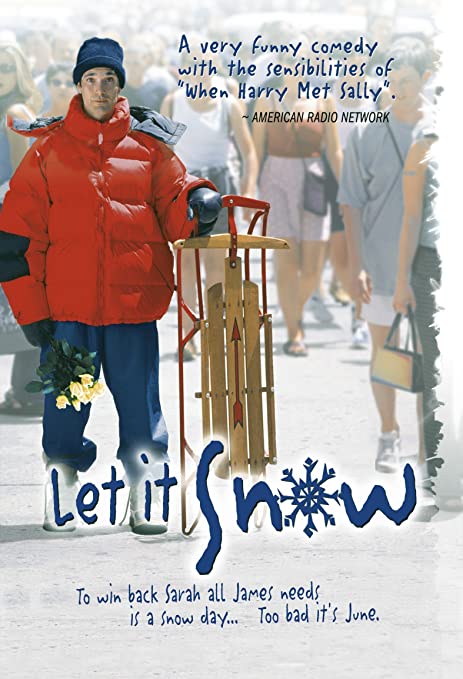 Shot in 1998 but only being released now, LET IT SNOW is an urban romantic comedy that starts in New England. When James is 4-years-old, his Jewish Grammy tells him the family is cursed in love. One New England snow day, however, James, now 18, meets Sarah, the Gentile girl who just moved in next door. Just when they are about to finally find romance with one another, a misunderstanding keeps them apart. Four years later in New York City, an increasingly lovelorn James tells his troubles at “open mike therapy night” at a comedy club while Sarah is about to get married. All James wants now is another snow day to get a second chance at love. Unhappily for him, it’s June!

Played by Kipp Marcus, who also wrote the screenplay, and Alice Dylan, James and Sarah make a cute couple, a necessary ingredient for such a romantic comedy as LET IT SNOW. Regrettably, however, their winsome, gentle romance is surrounded by some crude dialogue and smarmy sex scenes, especially when James “sows his wild oats” after his romance with Sarah fails. It is only at the end that the movie picks up steam.

(RoRo, PaPa, O, Ho, LLL, V, SS, NN, A, D, M) Romantic worldview with pagan sexual attitudes, reference to astrology, minor homosexual character played for laughs, & man says his family is Jewish “but we celebrate Easter,” though it’s not clear what he really means by that; 39 mostly strong obscenities, at least 2 strong profanities & 6 mild profanities; some slapstick violence, including a comical fight scene; depicted fornication, references to oral sex & masturbation, & grown-up son talks to his mother about her past sex life as a divorced woman when she brought her lovers home; partial male nudity, upper female nudity & woman poses in lingerie; alcohol use; smoking; and, husband abandons wife & son to “find” himself, lying & mother succumbs to pagan New Age fads as seen in a couple brief scenes (but this is mostly used for comedy).

Shot in 1998 but only being released now, LET IT SNOW is an urban romantic comedy that starts in New England. When James is 4-years-old, his Jewish Grammy tells him the family is cursed in love. “Stay away from love,” she tells him. “The men leave and the women go crazy.” That’s exactly what seems to happen when, later, his father abandons James and his mother, and the mother turns to a series of affairs with men from other countries, or, as James calls it, “The International House of Dating.”

One New England snow day, however, James, now 18, meets Sarah, the pretty Gentile girl who’s just moved in next door. They become fast friends, Sarah goes off to New York City to become a TV meteorologist, and James starts to attend classes at the CIA, the Cooking Institute of America. One evening, they arrange a date and sparks begin to fly, but a misunderstanding causes a failure by James to follow up on his feelings for Sarah until it’s too late. Basically, both James and Sarah are afraid that love will ruin their friendship.

Four years later, James has dropped out of cooking school and is working as a mere waiter for a catering firm in New York City. Sarah, meanwhile, is about to get married to a stuffy young Englishman she met in London. All James wants now is another snow day to get a second chance at love. Unhappily for him, it’s June!

Kipp Marcus stars in LET IT SNOW as James. He also wrote the screenplay, which is directed by his brother, Adam. Alice Dylan plays Sarah, and Bernadette Peters plays James’ ditzy mom. As played by the two romantic leads, Sarah and James make a cute couple, which is important if you want viewers to sympathize with their romantic predicaments, but the movie veers away from the winsome comedy of the opening scenes to engage in sex farce as James dates other women after he and Sarah part company. Before those scenes, there is also some crude dialogue from James’ best friend, Mitch, played by Henry Simmons of TV’s NYPD BLUE. It is only at the end that the movie really picks up steam as James becomes lovelorn and starts to act a little bit crazy himself.

Thus, like many independent movies, what LET IT SNOW needs is a good script doctor to tighten up its storyline and a cleaner, more intelligent sensibility to heighten its quotient of fun. The crude dialogue and smarmy sex scenes don’t belong in any movie, of course, but that’s even more true with this one because the main romance between James and Sarah is handled so pleasantly.