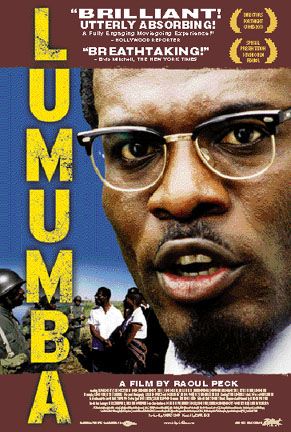 LUMUMBA tells the story of the 1960s African political leader, Patrice Lumumba, who helped the Congo gain a short-lived independence from Belgium. Lumumba begins his politicking while he is out hawking beer as a salesman for one of two top breweries in Congo. During his routes, he publicly rallies the native citizens of Congo, demanding that Belgium immediately give them their independence. After time in jail, he and other tribal leaders help the Congo gain independence, but political turmoil, personal rivalries, tribal conflicts, and murders of white settlers tear the new government apart and end in Lumumba’s brutal assassination.

The acting in LUMUMBA is superb, and it looks like a well-budgeted Hollywood movie despite the subtitles. Yet, the movie fails to explain what made this man so dangerous that such extreme measures were taken to completely erase him. Viewers are left having to suspend their unbelief and to assume, with minimal evidence, that Lumumba and his friends were so charismatic, and so well-loved, that even to have their bones accessible would cause trouble. Eventually, viewers become numb and detached historical observers to the horror of his violent death. They never come to know the man.

(Pa, AP, L, VVV, N, A, M) Pagan worldview condoning or including rebellion & treason by national leaders as well as totalitarian rhetoric & some anti-Americanism; no foul language; strong, sometimes excessive violence such as a lynching; murder, attempted murder & implied rape by drunken and/or angry soldiers, sadistic beating by prison guards, explicit firing squad executions, bloody dead bodies, & vile hacking & sawing of dead men with associated sounds; implied rape; naturalistic nudity; use of alcohol; no smoking; and, burning of human remains with a cold “well, that’s that” or something to that effect when finished, envy & vengeance.

The historical drama LUMUMBA is an independent Haitian film directed by Raoul Peck. It was adapted from a 1991 documentary, also directed by Peck, entitled LUMUMBA, DEATH OF A PROPHET. A testimony to the fallen state of mankind, it portrays the tragic failure of godless men trying to establish an indigenous government in a politically volatile Congo as it gained independence from Belgium in 1960. It should remind the audience to be grateful for the example set by the founding fathers of the United States as they established a new nation. In contrast to the leaders of Congo, they were united by a common Christian worldview and their trustworthy characters were forged out of a reverence for God.

It may be argued that white Europeans did their best to ensure that the democratic independence granted Congo in 1960 was short-lived, but the movie seems to indicate that it wasn’t just the oppressive Europeans that deserve blame. Sharing the blame were dozens of rival tribal leaders from within Congo’s diverse native society who were unprepared, politically naive, vengeful, envious, lacked unity, and lacked character.

LUMUMBA is may be many people’s only exposure to Congo’s history. There is no doubt that its history has been tumultuous. The title sequence makes this clear with authentic-looking photographs of Congo Africans being abused and killed by their European conquerors – as if they were animals. By the time the little slice of Congo’s history that the movie LUMUMBA presents is over, many people will want to find out more of the specifics – which is something any good historical drama should inspire.

The story begins with three unidentified bodies being transported under cover of night. They are then pulled from the back of a truck, hacked to pieces and finally cremated. Due to the subject matter of the movie, it was easy to guess that these were the bodies of the Congo’s Prime Minister Patrice Lumumba and his compatriots, central characters of this story. Although it’s dark and the audience never actually sees the gore, the effect is just as powerful – very gross…very violent. The movie attempts, from that point, to historically explain this morbid scene. The voice of the title’s character proceeds to tell the story of a big dream gone awry.

It seems that Lumumba began his politicking while he was out hawking beer as a salesman for one of two top breweries in Congo. During his routes, he publicly rallies the native-African citizens of Congo, demanding that Belgium immediately give them their independence. He is jailed and beaten for his agitation. Then, some years later, he is unexpectedly summoned from prison and, sitting with representatives of the 20-some different Congo tribes, demanding that Belgium’s King Leopold III turn the helm of Congo’s government over to them. The king relents and independence is won.

However, the new Congo government may as well have been stillborn. In the movie, Congo’s tribes seemed to lack the unity necessary to maintain any semblance of stability. The only thing these tribes did appear to have in common was that they all wanted independence in their little corner on the continent of Africa. So when the new government began, the foundation was fragmented by ancient tribal rivalries set aside just long enough to oust the Belgians.

Joseph Kasa Vubu wins the presidency by a national election. Moise Tshombe, the leader of the richest, and thus politically best-connected province, Katanga, is envious of the subsequent appointment of Patrice Lumumba as Prime Minister. Tshombe thinks that, since his beer company was bigger than the company which employed Lumumba, he should be Prime Minister. Insulted, Tshombe pledges that Katanga will not cooperate with the new government. He appears several times again as Katanga itself declares independence from the Congo. Then, he does not allow the Congo president and his staff to land in his province. In the end, he lends his hand to finally destroy the leaders of the short-lived government – with Lumumba serving only two months.

Another person in the mix that illustrates both the lack of unity and lack of character that helped destroy the infant government is Joseph Motubu. Due to turmoil in the Army, still being run by a racist Belgian officer, Motubu is assigned from within the Congo military ranks to replace him. Tragically, it turns out that Motubu lacks the character of an officer. He allows his army to vengefully beat, torture, rape, and kill many of the white Belgians that remain in the Congo.

Belgium, because of all the unrest, isn’t far from sending troops back to maintain order and protect their people. It appears likely that, if Belgium has to use force to keep the peace in the new nation, they probably will take governmental control again. Lumumba recognizes this and reprimands Motubu. After the confrontation, Motubu walks away pridefully, head up. As the movie appears to make clear, he eventually leads a coup d’etat, assuming leadership of what became Zaire after the deaths of President Vubu and Prime Minister Lumumba.

Either the screenplay of LUMUMBA isn’t sufficiently developed to indicate that Lumumba and his peers were in any way prepared to take over a whole nation or, in truth, they really weren’t prepared. There is no evidence that they even had any government leadership experience on a local level. In any case, how could anyone in that society have been prepared for the factions and treasons they encountered? At one point, Lumumba says something to the effect of, “We were 50 years too early.” It’s as if he realizes that they had bitten off much more than they could chew.

As Lumumba-and-company’s dream quickly disintegrated around them, Lumumba came to the point where he seriously considered the idea of calling the Russians, who also had interest in mineral-rich Congo, for help. He didn’t trust the motives of Belgium and the United States – both with political and mineral interests and very concerned over the volatile condition in Congo. Amidst the instability and rumors that Lumumba was a communist, they eventually agreed with the disconcerted tribes to allow the tribal leadership to deal with it. In the end, the Belgians and the Katangans, with the help of Motubu’s military, killed the whole leadership team, hacked them up and turned them into ashes.

Peck, the director of LUMUMBA, probably would liken Lumumba to Malcolm X, his contemporary in the United States. Yet, the movie fails to explain what made this man so dangerous that such extreme measures were taken to completely erase him. Viewers are left having to suspend their unbelief and to assume, with minimal evidence, that Lumumba and his friends were so charismatic, and so well-loved, that even to have their bones accessible would cause trouble, or, maybe there is some associated tribal superstition the movie fails to tell us?

Perhaps because Peck also directed the documentary on Lumumba, he assumes that audiences will fill in the historical gaps that were so obvious to him. This leaves the film with too many questions for a mainstream movie audience.

Mr. Peck, an experienced documentarian, should have taken more time to endear viewers to Lumumba by establishing his character and personal background. Lumumba should have been the center of attention rather than the historical events in which he participated. That way, when he dies, our hearts would actually sink because we’ve lived with him and watched him grow into the realization of his dream. We would have understood why he came to such a violent demise. Instead, viewers become numb and detached historical observers to the horror of his end. Because of this oversight, the audience for this historical drama about Patrice Lumumba may be only slightly larger than that of his more thorough Lumumba documentary. Still, the movie provides a valuable lesson about the failure of secular governments that are not grounded in the God of the Bible, although many people will not discover this lesson unless they too are grounded in God.

The acting in LUMUMBA is superb. It looks like a well-budgeted Hollywood film except for the subtitles that seem to disappear as we are drawn into the story. Overall, for those who would take the time to see this film, or for history students who may have no choice, it will, at least, provoke many to check out the history of the Congo and Zaire on their own.